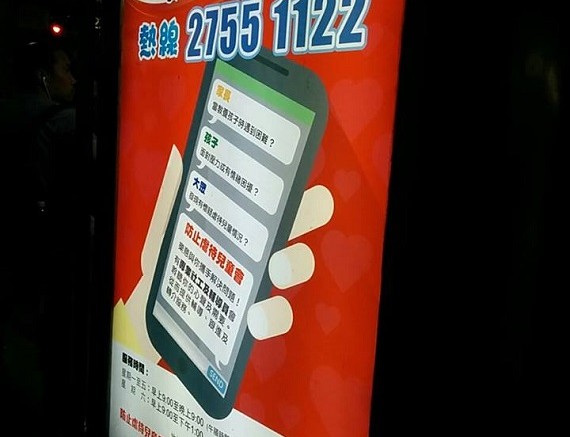 Telephone hotline of Against Child Abuse

I want to tell you about a tragic story that resulted in the death of a five-year-old disabled boy. His name was Yeung Chi -wai. Chi-wai was diagnosed with Down Syndrome and suffered with mental disabilities. When he died, the special child care centre he attended assessed that his developmental age was that of a one-year-old. On March 23, 2013, Chi -wai died of methamphetamine (or ice) overdose with a toxic level seven times higher than the usual ice-related death. His case was concluded by the Coroner’s office as a misadventure on March 17 this year.

How could a disabled child had so much ice in his body? The toxicologist suspected Chi-wai swallowed an entire piece of ice crystal which he probably picked up somewhere at home. The single mother and her boy friend have been known to be drug addicts. It was revealed in the death inquest that both were smoking ice while feeding the boy milk. In fact, the couple used his milk bottles to smoke ice. The boy friend told the police he did not mix up the bottles but conceded it was possible some drugs dropped on the bed sheets when he unpacked it, according to the South China Morning Post.

A month before his tragic death, Chi-wai was found to have multiple wounds on his body and that he was frequently absent from school. A Multi-Disciplinary Case Conference (MDCC) was conducted to assess his situation. The various professionals in the MDCC agreed that the mother was unfit and incapable of taking care of her child, and that the Social Welfare Department should consider filing for a Care or Protection Order to put Chi-wai in a residential child care facility. However, MDCC finally allowed the child to be returned to his mother because there was no residential care service available at the time. In addition, although there were obvious signs of child neglect, there was no evidence that the mother had purposefully inflicted harm on her son. The social worker from the Social Welfare Department would put Chi-wai in queue for a residential care slot. The average waiting time for such service, however, was more than a year. Chi-wai died a month afterwards.

“Chi-wai’s death was unfortunate,” the coroner said. “This inquest demonstrates that drug abuse not only harms drug abusers, but also their family members.”

The mother never appeared in the inquest. She and her boy friend were cleared of child abuse charges as investigators did not find the drug or tools to consume it within the flat.

The coroner recommended that Social Welfare Department should amend its child abuse guidelines to include consideration of how and where the carers’ substance abuse took place and whether the drug was accessible to the child in drawing up care plans for abused children. The Department said it would carefully consider the coroner’s recommendations.

I wrote to the Social Welfare Department shortly after I learned of the tragedy, demanding a complete review of the insufficiency and gaps of services. The Department wrote back, repeating what it is already doing under the current policy.

No one was responsible for Chi-wai’s tragic death. His carers did not have to pay anything for their neglect and abuse of the child. The professionals, who could have saved the child, had they insisted on removing the child, were simply following guidelines. Policy makers took very little notice of the service gaps since these gaps exist in many services and have been there for many years. The society will forget very soon as there are too many tragedies to register.

Chi-wai is not the only victim, according to the Hong Kong Committee on Children’s Rights. “In the past 3 years, at least 11 kids were abused, neglected, poisoned, dropped from height, injured or even died as a result of parental substance abuse. Our child protection system seems to have fallen through these kids”, said Billy Wong, the executive director of the Committee.

“Shelters taking in Hong Kong’s abused children are constantly full to the brim, with places for mentally disabled children at 98.4 per cent capacity” Jennifer Ngo of SCMP wrote on May 2 this year. “That means children facing abuse and neglect at home cannot be moved to a safe place in time. And social workers in their desperation are resorting to unconventional pre-emptive measures, such as calling an ambulance to get a child to hospital before possible harm.”

A group of paediatricians, social workers, and children’s rights advocates came to the Complaints Division of the Legislative Council to alert us of the dire situations. Dr. CB Chow told me that he came with pain, disappointment and anger because our systems have been failing our children for so long. He pointed out that in a recent study conducted in two hospitals in the territory shows 2 per cent of pregnant women admitted that they were active drug users. That means we have about 800 babies born to these high risk families each year. What have we done to protect these children? Priscilla Lui, a long-time child advocate, reminded us that we don’t even have any central database to track these high risk families and the departments in social welfare, education, and medical care don’t talk to each other because of concerns for privacy. Jessica Ho, director of the Against Child Abuse, said: “It is very difficult to call an MDCC and even if it is conducted, there is no one to make sure the recommendations are followed through.”

Tom Mulvey, a retire family service agency director wrote in a letter in SCMP, “the children are certainly abused, not generally by parents, but by an apparently uncaring, uninformed Social Welfare Department which still seems unable to develop long-term planning. There is no government child care policy, merely provision of service on an ad-hoc basis.”

Fernando Cheung Chiu-hung is a Labour Party legislator representing the New Territories West geographical constituency. This is an edited version of his Letter to Hong Kong broadcast at RTHK on May 15.

Be the first to comment on "Who killed Yeung Chi-wai?"