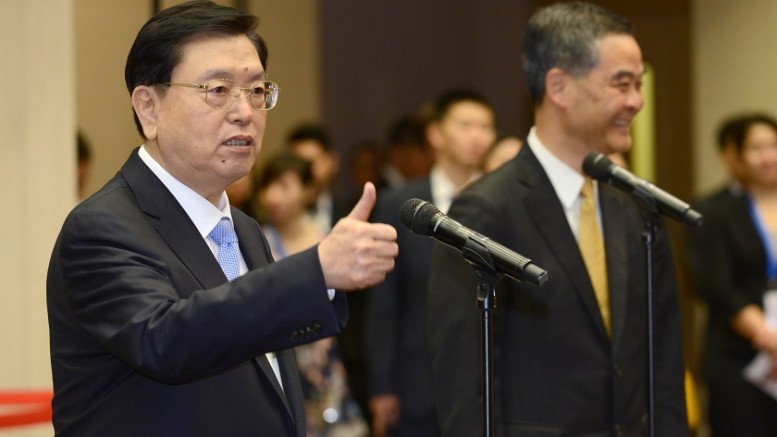 NPC chairman Zhang Dejiang sticks to the official line in giving backing to the governance of Chief Executive Leung Chun-ying, who faces calls for his removal during Zhang's visit to Hong Kong.

With the grand “Belt and Road” initiative as the wrapping paper, China’s Number Three man Zhang Dejiang has delivered a gift with economic candies and political bitter pills for the people of Hong Kong during his three-day “inspection” ended on Thursday.

Zhang, who ranks below Xi Jinping and Li Keqiang in the powerful Communist Party Politburo Standing Committee hierarchy, was full of promises of “backing Hong Kong” in his address to an international audience at the “Belt and Road” forum on Wednesday.

Citing the city’s proximity to the motherland, he said Hong Kong stood to benefit from the opportunities arisen from the country’s strategic “Belt and Road” initiative. In a bid to convince sceptics the strategy initiated by Xi is just grand talk, Zhang listed four areas where Hong Kong could participate.

They include professional services, financial services, “people-to-people exchanges” and cooperation with the mainland on developing businesses along the land and sea routes connecting China with the rest of Eurasia. 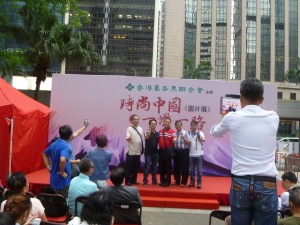 It may sound more specific than what has been uttered by Chinese officials in the past few years. But businesses, in particular those in small- and medium-size scale, can be pardoned for remaining doubtful and unsure about how they could gain from the “Belt and Road”

In view of the “new circumstances” of Hong Kong emerging in the past few years, the political messages conveyed by Zhang during his three-day visit, the first by a top leader since the then vice president Hu Jintao visited the city in 2012, are far more important.

While reaffirming Xi’s pledge made in December when meeting with Chief Executive Leung Chun-ying in Beijing that Beijing would not change the “one country, two systems” policy, Zhang has warned against attempts to alter the policy by calling for independence or self-determination.

He said pro-independence moves would not succeed and would bring about chaos with the whole society having to foot the bill.

Beijing’s pledge of “one country, two systems” may sound music to the ears of Hong Kong people. But Beijing’s latest thinking about the policy as shown in some arrangements of programmes during the visit have caused unease among the populace.

Police mount tight security around Grand Hyatt Hotel, where Zhang Dejiang was residing during his visit.

Speaking at a post-visit press briefing, Central Government’s Liaison Office Director Zhang Xiaoming described as one of the new arrangements the reporting session by the Chief Executive and senior principal officials (Chief Secretary, Financial Secretary and Justice Secretary) to Zhang during the visit.

He said the session for state leader to hear work report from top SAR officials demonstrated the proper relationship between the central government and the SAR under the “one country, two systems” policy.

His elaboration is in line with the description of the official Xinhua news agency of Zhang Dejiang’s visit as an “inspection”, which is used when state leaders pay visits to local cities in the mainland.

They are among the arrangements Beijing are now keen to make it right to avoid any confusion and misunderstanding about the status of Hong Kong. However special and highly-autonomous it is, it is part of China and its government is under the central government led by the Chinese Communist Party.

Beijing’s assertion of their authority over Hong Kong under the constitutional order contradicts, at least in spirit, of its delegation of powers to the SAR for it to run the domestic affairs on their own, except for defence and foreign affairs and matters relating to the mainland.

If the “reporting of work” session and description of the visit as “inspection” sound a game of semantics and political symbolism, Zhang Dejiang is more specific when it comes to the issue of Hong Kong independence and self-determination and protests.

He warned calls for independence and self-determination would not succeed. He expressed hope that the SAR government and judiciary would strictly enforce the law and not to condone unlawful acts.

Whether it could be interpreted as pressure on officials and judges is in the eyes of beholders. But it reflects a change of tact of Beijing towards Hong Kong. While reasserting their authority over the SAR, they are giving a not-so-subtle reminder to the government and judiciary about how they should alleged unlawful protests and political dissent acts.

Be the first to comment on "Promises and realities: ‘Belt and Road’, ‘one country, two systems’"