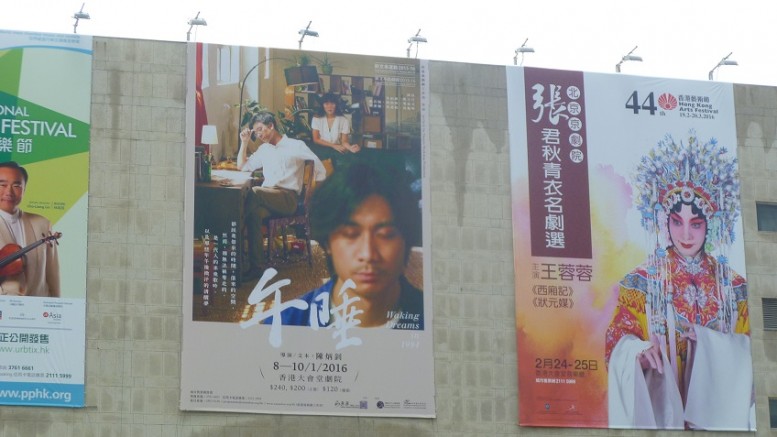 Hong Kong aspires to be an international hub of arts and culture. A row over alleged censorship in the name of an artist's Taiwan alma mater that contains the word 'national' stokes fears about freedom of expression.

Three points from the political storm whipped up by anonymous Hong Kong government cultural services staff, who had asked a local drama group to drop the name of an artist’s Taiwan alma mater, which contains the word “national (國立)”, from a programme pamphlet. The Government was accused of practising political censorship. The Taipei National University of the Arts, the alma mater of the artist Law Suk-yin, expressed deep regret. Arts groups fear freedom of expression is in jeopardy.

Archival search conducted by journalists among government documents and events pamphlets has confirmed there have been previous cases of the names of university of groups that contain the word “national”, “being disappeared.” But there are also cases showing the opposite, in which the word sees the light. The most plausible explanation is that there is no black-and-white rule given by the Home Affairs Bureau and the relevant department to staff for them to axe the word “national” and those of similar kind. That censorship seems to have happened shows there are perhaps either unwritten reminders from senior management for staff not to ban those words or a practice of second-guessing by staff – or both – for removing politically incorrect words.

Selective censorship brought about by a culture and practise of second-guessing about political correctness by civil servants is equally, if not even worse, damaging than a total ban.

In most, if not all, government crises, the biggest challenge for leaders is often not so much about the severity of the crises, but the way they are being handled. As the saying goes, the buck stops here. Quick act by politically-accountable officials to come out and take responsibility often turns out to be the most effective step to contain a crisis before it gets out of hand.

Chief Executive Leung Chun-ying chose not to wade into the mess when he was confronted with the question on Tuesday as the story hit headlines. Nor he has tried to allay fears about censorship of arts and culture. He said minister Lau Kong-wah, whose official title is Secretary for Home Affairs, would respond soon. Lau did, but in fact didn’t. He read out a prepared statement, saying they would foster better communication with arts groups. He didn’t take any questions from reporters. The key question of whether there is a policy of ban on such words as “national” was left unanswered as this article hit the digital space. Equally worse, who should be held responsible for the missing word “national” saga is as foggy as the weather recently.

Amid growing disillusionment with the promises made by Beijing under the framework of “one country, two systems,” the alleged censorship has reinforced jitters among the Hongkongers about the erosion of the city’s values and systems under Chinese rule. The ban on such words as “national” has stoked fears that Hong Kong will become “just another mainland city”, having to toe Beijing’s line and being political correct on matters that belong to “one country.”

Any excessive stress on the principle of “one country” will backfire, prompting people to speak up and act firmly in preserving the local culture, values and systems. It adds fuel to the campaign in support of localism and independence after 2047. On the Taiwan front, the case has caused more damage to the Taiwan people’s perception about “one country, two systems”. The imaginative “one country, two systems” has originally been mooted by the Communist Party for reunification with Taiwan. A successful implementation of it in Hong Kong could help lure Taiwan to be reunited with the mainland. Cases like the ban on the word “national” have done the opposite.

Be the first to comment on "What’s in a missing university name?"