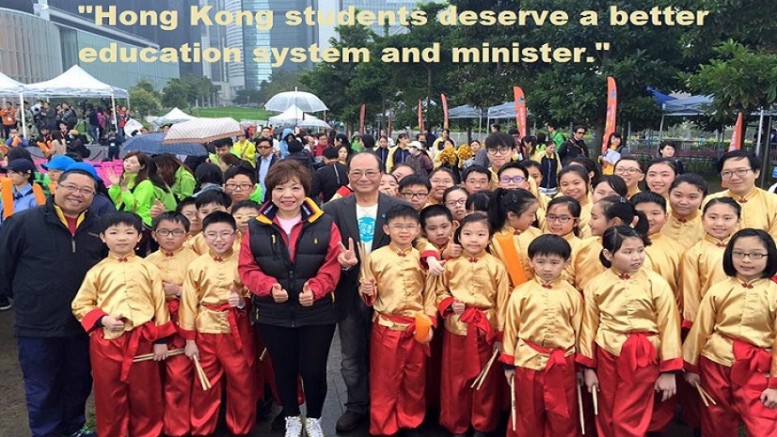 Education minister Eddie Ng with a group of students. He is in hot water again for his deeds and words.

Education minister Eddie Ng Hak-kim would have scored full marks if his recent deeds and words were aimed to set a bad example for young students not to learn from him. Well done.

Among his bad deeds was a “do-nothing, hear-nothing” performance on Saturday when he ignored a group of some 30 students who attempted to hand in a joint petition letter to him after he officiated a ceremony at a secondary school.

As students blocked the road to prevent him from leaving, Ng was seen using a smartphone in his car. He was ridiculed by some media for “playing with his phone but not seeing students.”

Ng rejected the criticism on Sunday, claiming he was communicating with his colleagues and doing his while being stranded.

Lau Ming-wai, who heads the Youth Commission, reportedly said Ng should come out to receive the petition from students, or at least to find out what students have to say. Education and other officials are obliged to listen to the voices of students, he said. Legislator representing education functional constituency Ip Kin-yuen said it was basic courtesy for Ng to receive a petition.

Ng was an angry man when he departed from his prepared speech, which he seldom did, at the secondary school event. He made an off-the-cuff rebuttal of criticism that the government’s education system was to blame for the recent string of political and social incidents. He said he felt unhappy with the verbal attacks.

Among the education system-bashers were pro-establishment figures. The latest was Charles Ho, the boss of the Sing Tao News Group, who fingered at the city’s language and general education training at a dinner talk on Friday.

Human nature has it been that no one would like to be slammed. But it has been traditional wisdom that people learn from being criticised, starting with listening to the critics, reflecting on the criticism and making self-correction for improvement.

The key to self-correction is to have an open mind, a sense of humility, a cool head and a warm heart towards dissenting voices.

Admittedly, it risks over-simplification to put all the blame on the education system for the spate of political events such as the Mong Kok disturbances where students played a role.

But a mind-set of denial as demonstrated by Ng is the last thing educators would like their students to learn.

Vested with power and influence, Ng and other senior members in the Leung Chun-ying administration are duty-bound to make policies that are in the best interests of the society. It is no less important for them to set a good role model for the society, in particular the young, to learn from.

It could not be more ironical that the minister in charge of education has failed miserably in the test of attitude in open-mindedness and humility.