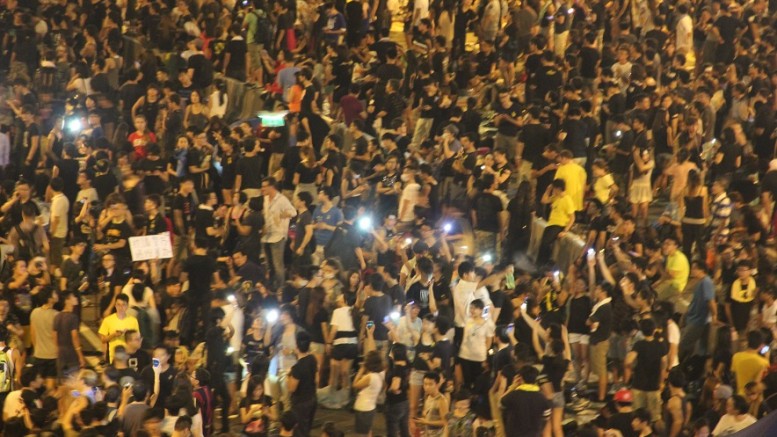 The struggle for a more democratic future electoral arrangement under the Basic Law has become increasingly confrontational. Verbal violence within the legislative chambers and physical violence outside government offices and on the streets are escalating. A growing number of new and not-so-new political groups are no longer ruling out violence – physical and verbal – as legitimate tools of political struggle. And the government too was quick to use teargas at the start of the Occupy Movement.

While it is correct to conclude that successful political struggles in any regime are seldom unaccompanied by violence, this does not imply that waging violent political struggles is morally justified. Most philosophical traditions have moral sanctions against the use of violence against fellow men, including in politics.

Hobbes and Locke advocated a social contract theory of the state by arguing that when men agreed to leave the state of nature and join civilization, it was to end or limit violence and respect the rule of law. The use of violence as a legitimating factor is absent and is not a credible part of their argument. Modern archeological and anthropological evidence has proven their conception of the state of nature as a violent condition to be correct. The world of the hunter-gatherer tribes was indeed much more violent compared to later periods of human history.

Henry Thoreau, the author of Civil Disobedience, went to jail for one day because he refused to pay his taxes in protest against the state for constitutionally legitimizing slavery, but he was not violent even though he broke the law. Liberals like John Locke and John Stuart Mill would not have approved of his decision to break the law. Thoreau’s idea of civil disobedience influenced Gandhi and also Martin Luther King to lead political struggles to free their peoples, but their struggles manifested in peaceful protests, not violence.

Liberal democracy as a political ideal does not provide a moral case for using violence as a means of achieving the democratic ideal. This is not to say that the birth of liberal political democracy in history has been nonviolent; the issue is whether the use of violence has a moral ground.

Violence should be not endorsed, legitimised

There is a more important reason why violence should not be endorsed and legitimated: one has to consider what happens after an oppressive government has been overthrown with violence. Will the new government become the new oppressor? If it is naïve to believe that one can overthrow a tyranny without violence, then is it not equally naïve to believe that a political group that expediently uses violence as a means to achieve its ends will not use it again on drummed up excuses to prolong its use? Once the door to violence is open, it might be difficult to close it, ever. Violence often only begets more violence.

I know of two intellectual traditions that have been employed to justify the use of violence to achieve political goals: historicism and postmodernism, both extremely unpalatable.

First, historicism is a mode of thinking that emphasizes the significance of a specific context, such as a historical period, geographical place and local culture. It argues that to understand why a person is the way he is, you must examine that person in his society: and to understand that society, you must understand its history and the forces that influenced it.

The historicist mode of thinking grew out of Romanticism, primarily a Continental European intellectual movement that influenced literature, history, culture, art and music and appeared in the 17th and 18th centuries, mostly among German thinkers. In the English-speaking world, Romanticism had some influence on literature and philosophy, but historicism was largely ignored. Historicism became fully developed in the idealistic and dialectic teachings of Georg Hegel (1770-1831).

Historicism has been interpreted variously.

The Right Hegelians, focused on Hegel’s views about the historically determined nature of human societies, interpreted Hegel’s historicism as a justification of the unique destiny of national groups and the central role of the state in realizing it. Hegel’s conception that the state as an entity was greater than the individuals who constituted it was an emotive force behind the romantic nationalist aspirations that yearned for a unified Germany in the 19th-century (accomplished by Bismarck the Minister President of the Prussian state in 1870). It also inspired the genocidal excesses of the German Nazi state in the 20th-century.

The Young Hegelians, by contrast, interpreted Hegel’s thoughts on societies to be a doctrine of social conflict and social progress. Karl Marx’s doctrine of “historical inevitabilities” and historical materialism is the most influential reaction to this part of Hegel’s thought. Significantly, Karl Marx’s theory of revolution predicts the inevitability of the overthrow of capitalism by the rising proletariat class, whose class-consciousness would be awakened by growing alienation under the inherently antagonistic contradictions of the capitalist mode of production.

Karl Popper condemned historicism along with the determinism and holism that he argued formed its foundations. In the Poverty of Historicism, he identified historicism as a view of the “inexorable laws of historical destiny”. This prescription of an inevitable human destiny could be transformed into a justification for violent struggles to overthrow an oppressive state and for the state to violently oppress the people in fulfillment of that destiny – whether inspired by rightist fascist ideas or leftist anarchist, socialist and communist ideas.

The second intellectual tradition, postmodernism, is a 20th-century philosophical movement that also emerged in Continental Europe, primarily in France, and has had lasting influence on linguistics, art, architecture and literature. Its most important consequence is its skepticism that all knowledge, including scientific knowledge, can offer an objective truth of reality.

Postmodernism is the most ruthlessly consistent statement of anti-reason and antirealism. It is the consequence of over two centuries’ effort to reject reason. Although postmodernists presents themselves as anti-metaphysics and anti-epistemology, but in postmodernism we find metaphysical antirealism, epistemological subjectivity, the placing of feeling at the root of all values, the consequent relativism of both knowledge and values, and the consequent devaluing or disvaluing of the scientific enterprise.

Postmodernism completely rejects Enlightenment rationality. Truth and values are no longer absolute and objective, but relative and subjective. It represents the end product of the Counter Enlightenment movement that started in Germany in the late 17th century, culminating in the collapse of reason in much of philosophy in the 20th century.

Heidegger attacked logic and reason to make room for emotion, Derrida deconstructed language and turned it into a vehicle of aesthetic play to lay bare the contradictions of everything that is worth saying. Rorty chronicled the failures of the realist and objectivist tradition. and Foucault reduced knowledge to an expression of social power.

Once we set aside reality and reason, what are we left with? We can, as the conservatives would prefer, simply turn to and follow the traditions of the groups we belong to. Or we can, as the postmodernists prefer, turn to our feelings and follow them.

If we ask what our core feelings are, we naturally would connect with the answers about our human nature provided by the main philosophers of the 19th and 20th centuries. From Kierkegaard and Heidegger, we learn our emotional core is a deep sense of fear and guilt. From Marx, we feel a deep sense of alienation, victimization and rage. From Nietzsche, we discover a deep need for power. From Freud, we uncover the urgings of dark and aggressive sexuality. Rage, power, guilt, lust, and fear constitute the center of the postmodernist emotional universe.

Postmodernists disagree over whether those core feelings are determined biologically or socially. In either case, individuals are not in control of their feelings: their identities are a product of their group memberships and their “truths” are “ethnocentric truths” determined subjectively within their groups. Since the shaping experience varies from group to group, different groups – economic, sexual, racial, etc. – have no common experiential framework.

The humanities curriculums of so many universities today are dominated by “multicultural studies” that teach only “ethnocentric truths” crowding out the study of classical and Enlightenment ideas. Allan Bloom in The Closing of the American Mind (1987) argued that the current state of liberal arts education has failed these students and left them intellectually impoverished, and that the social and political crisis of 20th-century America is really an intellectual crisis.

With no objective standard by which to mediate their different perspectives and feelings, and no appeal to reason possible, group balkanization (or fragmentation) and conflict must necessarily result.

Nasty political correctness (for example, the insistence of “s/he” or “he and/or she” instead of “he” in writing or in speech) then makes perfect sense as a tactic. Having rejected reason, we will not expect ourselves and others to behave with reason. Having put our passions to the fore, we will act and react more crudely and at the spur of the moment. Having lost our sense of ourselves as individuals, we will seek our identities in our groups. Having little in common with different groups, we will see them as competitive enemies. Having abandoned recourse to rational and objective standards, violent competition will seem practical. And having abandoned peaceful conflict resolution, prudence will dictate that only the most ruthless will survive.

Postmodernist reactions to the prospects of a brutal postmodern social world fall into three main categories, depending on whether Foucault’s, Derrida’s or Rorty’s variant is given primacy.

Foucault, having reduced knowledge to an expression of social power, urges us to play the brutal power politics game, on behalf of the traditionally disempowered.

Derrida deconstructs language and retreats into it, and insulates himself from the scene. Rorty, having abandoned objectivity, hopes that we will seek “ethnocentric agreement” among the members of our own tribe and requests that we be nice to each other while doing so.

The postmodern options, in short, are to plunge into battle, or withdraw and insulate oneself from it, or try to ameliorate its excesses. If Foucault’s variant is chosen, then verbal and physical violence are merely tools of battle, for which reason cannot be used as a standard for adjudication.

Hong Kong’s youths, like those elsewhere, have had an overdose of postmodernist ideas. Their minds are proving to be a ready canvas for historicist dreamers bent on inventing nativist narratives to interpret Hong Kong’s difficult economic, social, and political condition for them. The success of these narratives depends more on style and imagination, than on reason and evidence.

In a sense, the intellectual upbringing of youths today is different from their grandparents’ and parents’ generation. When confronted with different values and ideas, they are far more likely to try to determine whether they are an affront to their own “ethnocentric truths” and, if so, whether one should deliver a response based on Foucault, Derrida or Rorty, because reason and evidence are not admissible standards for resolving differences.

Daniel Patrick Moynihan, a liberal democratic American politician and sociologist responsible for formulating the policy on the War on Poverty, said: “Everyone is entitled to his own opinion, but not to his own facts.” The postmodernist would respond by saying: There are no facts, everything is an opinion, facts cannot be known, and if your opinion is not the same as mine, you are not a member of my community. The next step is to determine whether you are friend or foe.

Anyone who has blogged realizes that the overwhelming majority of the comments received only aim to identify one’s position or stance, which group do you belong to; there is seldom any interest in discussion or debate. This is one of the legacies of postmodernism.

A concoction of postmodernism and historicism will not bode well for the future of liberalism.

Dr. Richard Wong Yue-chim is Professor of Economics and the Philip Wong Kennedy Wong Professor in Political Economy at the University of Hong Kong. This is an edited version of his article published on his Facebook.

Be the first to comment on "Historicism, postmodernism, and political violence: The closing of the human mind"