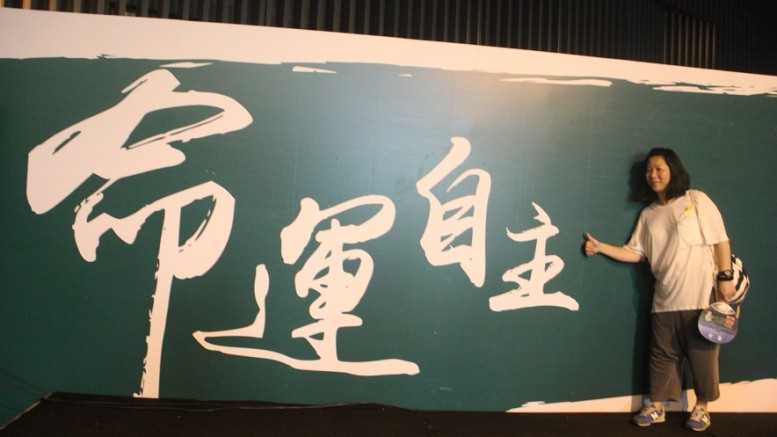 Pro-independence thinking in Hong Kong is spurred by uplifting slogans such as "Put fate in our own hands."

University of Hong Kong student magazine Undergrad has called for Hong Kong independence after 2047 in an article entitled “Our 2047” carried in its latest issue, sparking enthusiastic feedback in the society.

Among the pan-democratic political parties, the Democratic Party gave the clearest response; they oppose independence. The Civic Party is ambivalent. They support localism thinking in their recent statement that marks their 10th anniversary, but stopped short of making a clear stance on independence. Only Alan Leong Kah-kit said he personally opposed independence.

The Undergrad does not have any strong organisation behind them, nor their call have received backing from mainstream public opinion. So, why they have whipped up a storm of response in the society? As the saying goes, a tiny sparkle can devastate a piece of grassland. The Undergrad’s call is a tiny voice now. But if it spreads among university students and becomes the political demand of the young generation, it will not just adversely affect mainland-Hong Kong relations but completely change the fate of the city. And it will bring about enormous implications on the mainland. The pro-independence thinking is a mega-sized time bomb and a road of no return towards disaster.

A comprehensive case against independence needed

Many people have argued against the idea of Hong Kong independence from the perspective of practicality, saying it is unrealistic and impossible. The argument is that the city’s economic and financial lifeline is closely tied with the mainland. Hong Kong will finish if it goes for independence. No one can dispute against this argument. But taking a look at the experience of some pro-independence movements, such “practical” issues as economic interest is always not the primary concern. The slogans of independence movement are a list of politically-packaged, spiritually-uplifting calls such as “self-determination by the people” and “Put fate in our hands.”

Opponents against Taiwan independence and Scotland’s separation from the United Kingdom have cited tonnes of data to substantiate the economic disaster caused by the political demand. They help little to change public opinion in support of independence.

Put it in the context of Hong Kong, curbing the momentum of pro-independence thinking by stressing solely the economic relations between Hong Kong and the mainland and the issue of the city’s life and death may not work. The “pro-integration” faction must make a comprehensive argument from the perspectives of history, politics, culture and legality. They must secure support from the youth as early as possible to stop the spread of the influence of the “pro-independence” camp.

In the final analysis, “Hong Kong independence” is not a theoretical issue or a political ideal; it’s about a contest of political power. Take the example of the Tibet issue. A HKU legal professor Paul Harris has written an article about whether Tibet has the right of racial self-determination. He argued Beijing is obliged to honour the principle of racial self-determination. But as far as Tibet is concerned, leader-in-exile Dalai Lama has not asked for independence, but a high degree of autonomy in self-rule similar to what Hong Kong has been given. To Beijing, Tibet is fully under their control. The Dalai Lama has no bargaining power whatsoever. Tibet can only become an autonomous region. Similarly, Hong Kong has no bargaining power when it comes to the question of independence.