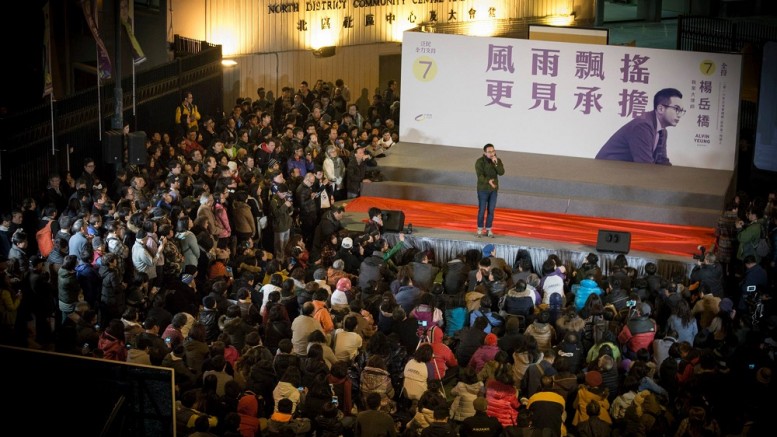 Should rationality prevail, they would vote for the candidate from the pan-democratic camp with the best chance in keeping the seat originally belonged to them for it not to be nabbed by the pro-establishment force.

Specifically, they would probably pick Civic Party’s Alvin Yeung Ngok-kiu, who is backed by major political pan-democratic parties including the Democratic Party and the Labour Party.

But should emotion prevail, there is a strong possibility that the seat vacated by Tong will fall into the hands of Holden Chow Ho-ding, the flag-carrier of the Democratic Alliance for the Betterment and Progress of Hong Kong with the backing of major loyalists groups including the Business and Professionals Alliance and the Regina Ip Lau Suk-yee’s New People’s Party.

That could happen if a significant number of pan-democratic voters give more weigh to their affinity of the political line and approach of the candidates, not the chance of their success in the electoral battle, when they cast their votes.

Based on that line of thinking, they might vote for Hong Kong Indigenous’ Edward Leung Tin-kei, who champions for localism and a more radical approach in politics. The opposite may be true. Some may prefer the Third Side’s Wong Sing-chi, who advocates a middle-of-the-road political line. Some may even pick Christine Fong Kwok-shan, Sai Kung District Council member, who takes a liberal pro-establishment stance.

Judging from the track record of votes in the NTE geographical constituency, Yeung had been tipped as the hot favourite, not without good reason. In 2012, pan-democrats took about 57 per cent of votes, the pro-establishment about 42 per cent. Although Wong and Leung might split votes in the pan-democratic camp, pundits had predicted Yeung would still be able to defeat Chow.

The Mong Kok “riot” has emerged as a potential game-changer.

According to a poll conducted by the Third Side after the mayhem, Chow continued to take the lead by a big margin, followed by Wong and Fong. Yeung ranked 4th, even behind the least-known candidates, namely independent candidates Albert Leung Sze-ho and Lau Chi-sing. Edward Leung’s popularity sank to the nadir.

Although the findings should no doubt be given a grain of salt, they have created doubt and confusion among the pan-democratic supporters. Should rationality prevail and the poll findings be taken seriously, pro-democracy voters should drop Yeung and vote for Wong, who came second in the poll conducted by the Third Side, of which Wong is a co-founder.

Meanwhile, a higher-than-expected turnout at a campaign rally organised by Edward Leung on Saturday has given a boost to the morale of supporters of localism and radical politics. Calls for pan-democratic voters to abandon Yeung and back Leung have grown in social media, casting a shadow over the chance of Yeung.

On the face of it, the majority of pro-democracy voters in NT East favoured pan-democrats who take a radical stance. In the 2012 Legco election, “Long Hair” Leung Kwok-hung took 48,295 votes, People Power’s Chan Chi-chuen got 38,042 votes, Labour Party’s Fernando Cheung Chi-hung grabbed 39,650 votes. Gary Fan Kwok-wai, who is seen as a moderate localist, took 28,621 votes. Together the four of them took 154,608 votes, compared with 100,938 that went to moderate democrats including Ronny Tong.

One important factor for the distribution of votes in the 2012 election is the so-called strategic voting among pro-democracy voters. They coordinated among themselves to cast votes on pan-democracy candidates evenly so that they could get the maximum number of seats under the proportional representation system.

The “strategic voting” game will be vastly different on Sunday. And it is simple. They have only one vote each; it is only sensible they should vote for the pan-democrat candidate with the best chance. That remains Yeung.

Anyone seriously believe Wong and Leung can beat Chow, who is backed by the huge pro-Beijing, pro-government election machinery?