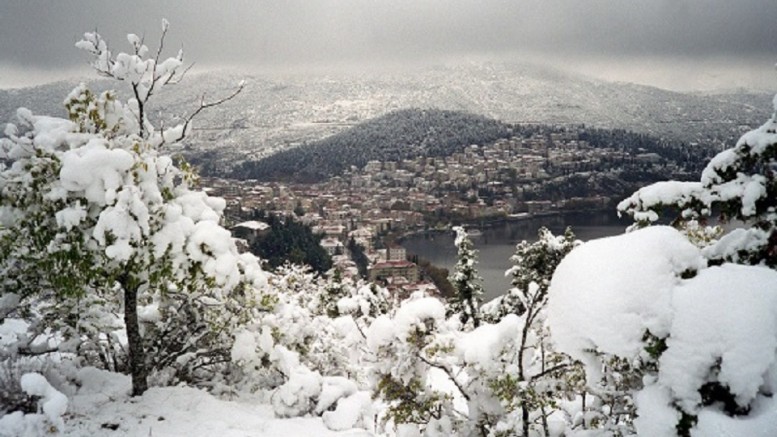 Kastoria, a scenic town on the hillside in Greece, features in a Greek tourism promotion website.

It is exactly five years since Greece joined the European Support Mechanism with the close cooperation of the International Monetary Fund (IMF). At that time, the key and critical financial data were the following: GDP amounted to US$222.151 billions at the end of 2010. The public debt was 148.3% as a percentage of GDP. Unemployment stood at 12.5%. The percentage of Greeks who were living below the limits of poverty (earning less than 60% of the national median disposable income) was 27.6%.

The policy of extreme austerity applied in the country at the behest of international creditors over the years has further aggravated the economic and social reality. As a result, GDP had shrunk to US$186.54 billions in 2014. Public debt has soared to 176% as a percentage of GDP. Unemployment has risen dramatically to 26%, affecting mainly young people many of whom have brilliant scientific knowledge and as a result migrate abroad. This serious loss of talent could help the country at this critical juncture. The percentage of Greeks living below the limits of poverty is 34.6% or 3.795100 people.

So, one understands from the above that the programme of fiscal consolidation in a country that was already in recession before 2010 has completely failed and it would not be rational, economically and socially, to continue its application. This particularly restrictive fiscal policy and austerity measures form an exceptionally lethal debt-recession-austerity spiral, ruling out any prospect for development.

The debt is huge and unbearable
Therefore, the observed persistence in strict continuation of the extreme austerity programme by creditors will have truly tragic consequences for the country. It will lead to total economic disaster, which will not be healed for decades and certainly to an incredibly serious humanitarian crisis for the standards of a post-war Europe. The homeless and impoverished citizens who one can already be seen in the streets of Athens will multiply rapidly. Suicides due to hopelessness and despair caused by the inability to survive will continue its frantic growth trend. Children blacking out in schools due to lack of adequate nutrition will become everyday part of life.

The question then arises with intensification this critical period is what should be done in order for Greece to leave the pitch dark tunnel of deep economic crisis and enter the bright avenue of development and progress.

First, the burden of debt the Greek economy carries on its back is huge and unbearable, and there seems no possibility of payment in full. Therefore, we need to write off the majority of the nominal value of the debt so that the debt burden of the country will be below 100% and become sustainable with a technique that will not harm the other peoples of Europe. The repayment of the remaining debt will be connected with a “development clause”, so as to serve from the development and not from any budget surplus.

Secondly, require the reconstruction of production in the country with these key elements:

a) The sustainable equilibrium of the balance current account through changing the mix of produced products in the country, thus strengthening the export orientation margins of many sectors of the Greek economy;

b) The industrialization with the implementation of an integrated sustainable industrial policy and the development of domestic research and production of a wide range of high added-value products. The processing sector is particularly critical since it is impossible to hope for a country that will rise in the value chain in the global apportionment of labour without creating the necessary manufacturing base that includes primarily the manufacture of finished industrial products;

c) The special emphasis on tourism, to which Greece has a strong comparative advantage and shipping -Greece has the largest merchant fleet in the world- and certainly agriculture for the production basic social goods, and;

d) The efficient exploitation of raw materials -such as bauxite from which aluminium is produced- and the potentially large oilfields located both in the Aegean and the Ionian Seas.

Building a modern and efficient State

Thirdly, we need to build a modern, efficient and rational state that will operate with honesty and will not interpolate countless bureaucratic obstacles to business development and the effective fight against the Lernean Hydra of corruption and tax evasion, to remove the multiple negative economic, social and political consequences caused and finally to apply fair taxation. The economic effects have not only to do with the losses of state finances but also with adverse effects on the private sector. When the notion that only with the bribing of individuals holding nodal positions in public administration can achieve the desired effect is consolidated, investments are discouraged, fair competition is distorted and businesses that refuse to engage in such lawless and immoral trade are condemned to stagnation.

The social and political consequences of corruption are also extremely serious. Corruption causes citizens’ resentment, frustration and a collapse of a strong sense of values. It consolidates the belief that nothing works properly and that law-abiding citizens do not feel justified in being so. Institutions are undermined, shaken and ultimately slandered by the same democracy in the eyes of citizens. We need the immediate establishment of a fair tax system that will not encourage, and will not “justify” tax evasion, but will contribute decisively to the development of taxpayers’ consciences, and will have as a result a significant increase in government revenue.

These measures should apply immediately to pull to pull Greece out of it state of coma and recession, and lead to the much-desired path to development, away from the wild and dead-end austerity policies, which form the spearhead of financial capitalism in its attempt to repay in full their debt, and maintain its sovereignty in an era of intense and generalised capitalist crisis.

For their part, European citizens should stand in solidarity with the drama of the Greek people who, during all these years, have become a guinea pig, since the vast majority of money borrowed by the Greek government does not go to Greek taxpayers, but rather to banks or to the payment of loans, or to recapitalize Greek banks, most of the cost of which the taxpayers bear.

In conclusion, Greece does not stand to continue with austerity. It has already reached its farthest limits, after the standard of living having collapsed, and with it, the dignity of the Greek people, and this will have to be understood by the creditors. The new third agreement with the extreme austerity measures will reinforce the recession and will act destructively. So, the time of conflict and rupture, will not be far off.

Isidoros Karderinis, born in Athens 1967, is a novelist, poet and economist with postgraduate studies in tourist economy. His articles have been republished in newspapers, magazines and sites worldwide. His poems have been translated in French. He has published seven books of poetry and two novels. Five of which have been published in the USA and in Great Britain. He can be reached at: skarderinis@hotmail.gr

Be the first to comment on "Greece on a knife edge"