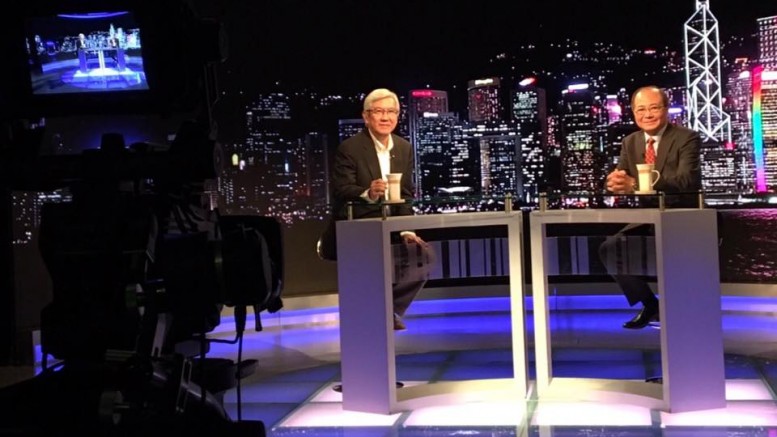 Education minister Eddie Ng speaks on TSA at a TV programme. His letter to school principals order an end of drilling has caused a fresh row.

A row over a city-wide assessment exams, known as Territory-wide System Assessment (TSA), in Hong Kong has shown no signs of an end. On Monday, two associations of primary school principals issued a joint statement against the Education Bureau’s call for no drilling in schools on the tests. In a strongly-worded statement, they said they were they were “furious” over the letter, which they said has showed the bureau’s “lack of understanding of school’s situation and its indifference to education.” Worse, they said the letter has damaged the mutual trust between parents and schools. Earlier, the pro-Beijing Federation of Education Workers also criticised the bureau’s letter. Meanwhile, the Professional Teachers’ Union, the city’s largest teachers’ body, has called on teachers to boycott the work of assessment on TSA exam papers. Three points from the brewing storm in classrooms.

The latest dispute erupted after the bureau issued a directive to schools on Friday, ordering an end to drillings for students to have a happy, relaxed Christmas holiday. Education minister Eddie Ng Hak-kim has warned schools violating the policy might get written warnings. Not surprisingly, schools were angry with the letter, which seems to have put the blame of drillings on schools. Ng argued yesterday the letter might have been “misinterpreted.” He said they would soon forge dialogue with schools. The question is: why the bureau has not talked to schools before the issuing of the no-drilling directive?

With Christmas approaching, the bureau might have attempted to please parents by talking tough towards schools for them to give students a break. Now that parents want the TSA be scrapped, they won’t feel satisfied with the break. Worse, the bureau has made enemies with schools by blaming them for the drillings. The bureau is faced with enemies at all fronts.

More than three years ago, the top echelon of the Leung Chun-ying had intervened to defuse an escalating political crisis precipitated by the protracted sit-in outside the government headquarters against the national education bureau. Leung’s Number Two, Carrie Lam Cheng Yuet-ngor, who is Chief Secretary, and an Executive Council member Anna Wu, were involved in the crisis management exercise. This time, there was no sight and sound of any top officials in the TSA row. One plausible reason is that the Leung team may not deem the row as anything akin to the national education protests in 2012. It should be left to the bureau. They are right in the sense that there have been no massive demonstrations in streets against the tests. Erupted at a time when the district council election began to heat up, the judgment of the Leung team has apparently been biased by their own mistaken assessment that the TSA row was just an election game-bit played up by the pan-democrats. They are plainly wrong. The TSA issue is close to hearts and minds of many parents, particularly the middle-class. The whole Leung team has to pay for the bungling of an inept minister and their own misjudgement.

It is an unfortunate coincidence that the Chinese name of Ng Hak-kim has been turned into a nickname “no good” when pronounced in Cantonese. It may sound a harmless joke. It isn’t. Former chief executive Tung Chee-hwa knows better than anyone to tell of the potential damage of a degrading nickname. Tung was given the nickname “Lo Mung Tung,” which means “Silly, Old Tung” in his final years in office. Mr “no good’s” problem, however, is not just because of his nickname. Three and a half years after he took the helm of education, cynics and critics have a point to give a fail to his performance. Earlier, he cited important private engagement as a reason for his  absence from a public hearing on TSA at the Legislative Council. He did not elaborate, but later revealed in his Facebook he was enjoying sushi and Sakura in Japan. Ng’s self-revelation, not surprisingly, has become the subject of ridicule and scornful words among netizens. If anything, the near-suicidal act of Ng is the wake-up call to Leung it is time to give the long-awaited boot to Ng before he creates more trouble and chaos to his team.

Updated at 19:57 pm Wednesday with spelling of Ng’s name in last paragraph corrected.