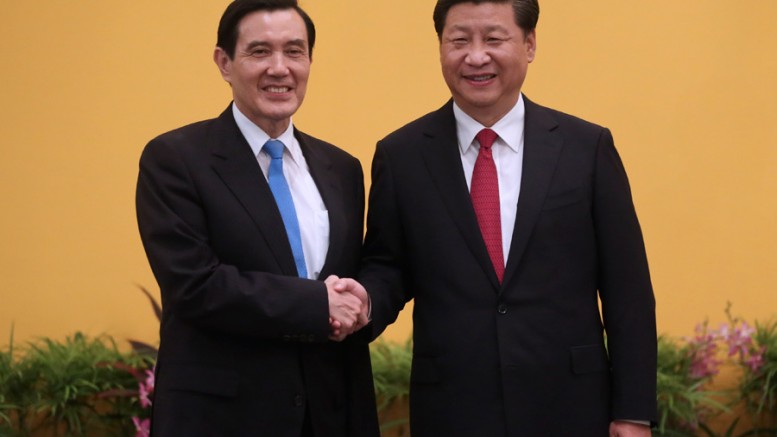 Three points from the historic summit between Mr Xi Jinping, whose official title is Chinese President, and Mr Ma Ying-jeou, the outgoing Taiwan President, at the weekend in Singapore.

Both Misters scored a goal in cementing the ongoing cross-Straits relations, which has entered arguably the most peaceful and stable period since 2008 after the Kuomintang fled the mainland at the end of a civil war. With his second, and last, term nearing its end, Mr Ma is eagerly keen to turn his mainland policy a shining component in his record sheet. In his opening statement of the hour-long talk, he said the sea change in cross-Straits ties after 2008 was based on “peace.” He further set out five suggestions for both sides. They include consolidating the 1992 Consensus, maintaining peace, reducing hostilities and resolving dispute in peaceful manner. Speaking to reporters as he departed for Taiwan, he said: “I have already said what I have to say.”

With the return of the pro-independence Democratic Progressive Party to power almost set in stone, Mr Xi is equally keen to consolidate the progress in ties with Taiwan. Never mind the longstanding differences over interpretation of the 1982 accord, that the pair reaffirmed the 1992 Consensus as the foundation of relations is itself important in view of the drastic changes in Taiwan since then. The key to the 1992 Consensus is the principle of “one China” and opposition against Taiwan independence.

From that perspective, Xi has also found the net. Cynics may say it represents no more than a return to the starting point. But it is a vitally important one.

In official statements on the Xi-Ma meeting, the Chinese government has underscored the importance of it as a showcase of the capability of people across the Taiwan Straits to resolve their own problem. The remarks could be interpreted as a veiled reminder to the Americans for them not to get involved in what Beijing has insisted as China’s internal affairs. Images of the two leaders shaking hands and started talking to each other amiably could ease pressure from the international community on the communist authorities. In spite of its insistence on an equal footing in the Singapore talk and global affairs, Taiwan is faced with the grim reality that the international community endorsed the People’s Republic of China as the legitimate government on the mainland. Its so-called “international space” is shrinking. The Xi-Ma summit will not change that, at least in the immediate term. True, the fact both addressed to each other as Mister to avoid giving recognition to their official status. At least in term of image to the world, Mr Ma has been accorded an equivalent measure of limelight to Mr Xi. Again, both scored.

In one important aspect, the two Misters are starkly different. Mr Xi, dubbed by some Western media as “Emperor Xi”, is on the rise to power and influence. The “Xi Era” has just begun. Mr Ma is the opposite. On his exit from the corridor of power and influence, he is striving to leave with a shining legacy. Both, nevertheless, have already succeeded in making history, becoming the first leaders on both sides of the Straits after 1949 to talk and dine. Both have done what their predecessors have failed to do. Although their achievements are largely symbolic than substantive, that is no small achievement in view of the immense difficulties and complexities of the problem inherited from history. Mr Xi may not realistically expect reunification will be achieved in his first and an expected second five-year term. He is in a good position to turn a new page in cross-Straits relations. Mr Ma will leave his office with a dismal record in governance. But he could claim credit for a long period of peace and increased exchanges between people across the Straits. Both scored a goal for their own.

The final result is a draw, but also a win for the two Misters.