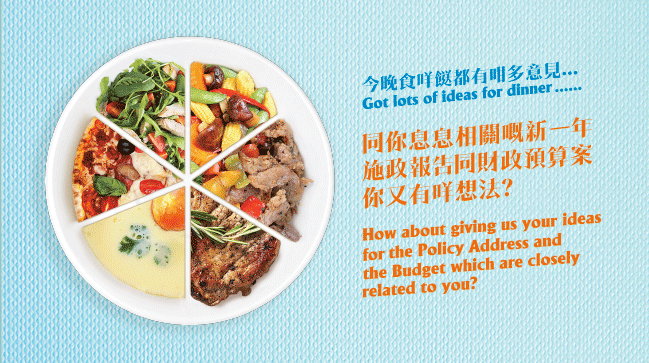 Hong Kong Government asks citizens to picks their dishes for the 2016 Policy Address.

Over the years, before and after 1997, the Hong Kong administration has issued calls for the public to express their wishes for what the then Governor or the Chief Executive should undertake to do in his annual Policy Address. For the upcoming Policy Address, the invitation took the form of a short film in which each family member asked the housewife leaving for the market to prepare dishes to his or her particular liking. With Christmas fast approaching, the administration might as well invite the public to hang their wish lists on a Christmas tree in the Tamar Park!  Regardless of the analogy, the key question is, while the housewife apparently has a fat wallet and a harmonious family, does the administration have the resources and the acumen to cater for the diverse and sometimes conflicting needs of a much divided community?

Administrations past and present have felt compelled to launch new initiatives in every policy area in the annual Policy Address. The same approach may not be appropriate for the coming Policy Address given the present circumstances.

Firstly, the administration’s current term of office will end in 18 months; the opposition parties have been clamoring for the Chief Executive to honor his political rain cheques written three and a half years ago during his election campaign. Moreover, public confidence in the administration has been eroded (by such incidents as the Lamma marine disaster, lead in potable water incident); then there are growing doubts in the administration’s competence and efficiency (in the light of such issues as the controversy over the airport’s radar system, supervision of MTRC, the handling of the Kap Shui Mun Bridge accident). On top of all, the Legislative Council election will heat up in the coming months.  Political opponents of the Chief Executive and the public may query why they should make new wishes when their previous wishes have not yet been met.

Against this background, and with so many hot issues already on the Chief Executive’s plate, the 2016 Policy Address should perhaps focus on the progress made in delivering the Chief Executive’s 2015 policy commitments in both qualitative and quantitative terms. More importantly, the Chief Executive should have the courage to acknowledge areas where the administration’s performance has fallen short of public or his own expectation, and set out the plans and measures to tackle the outstanding problems in the various policy areas.

Whilst it is imperative to address the more pressing problems, the 2016 Policy Address should not lose sight of the more deep-rooted and long term issues confronting Hong Kong, especially if the incumbent Chief Executive has his eyes on a second term. The weakening economic competitiveness of Hong Kong vis-à-vis cities and countries in the region is one such issue, as manifested in the falling English standard of the younger generation, the manpower shortage in various sectors, and the inadequate application of digital technology in our city management though the terms “Smart City” and “Asia’s World City” have been bandied by the Government for years.