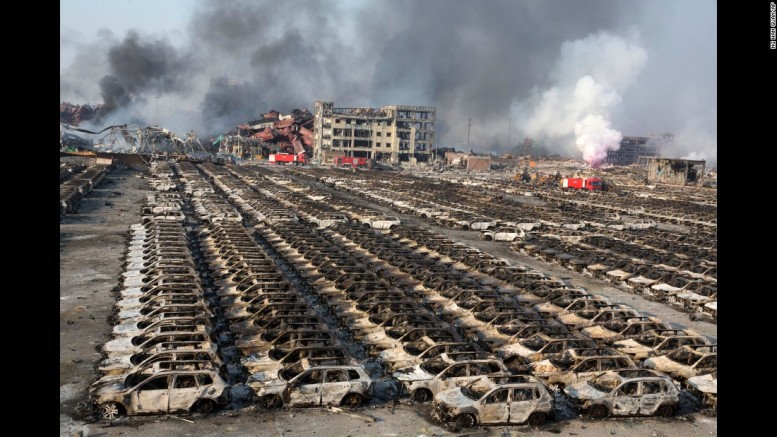 Hong Kong Chief Executive Leung Chun-ying would only have himself to blame when he has become an unlikely victim of the deadly explosions in Tianjin warehouse, which killed more than 114 people. 70 were still missing.

Leung has emerged as a subject of much ridicule by netizens and observers for his praises for the developments of the coastal municipal city during a visit in 2013. The praises have proved to be embarrassingly misplaced as the explosions have unearthed a litany of problems in Tianjin’s land use and city planning, if any.

Boosting his role in Tianjin’s “success” as an adviser to the city in 1993, he said Hong Kong has much to learn from Tianjin.

But in the wake of the disastrous blasts late Thursday night, Leung would have hoped he had never given a thumbs-up to Tianjin’s land development. He said in 2013: “”We have to learn from Tianjin’s overall long-term land planning.”

Despite the fact that the key question of what went wrong remains unanswered, a host of questions has already been raised about why massive dangerous chemicals had been allowed to be stored in a site with residential buildings only about 600 metres away.

In his regular column published in the Hong Kong Economic Journal on August 17, the paper’s former chief editor Joseph Lian Yizheng said the blasts represented a clear case of violation of the law and rules governing the city’s overall land planning.

First, Leung, as a chartered surveyor, should know better than many of the utmost importance of use of land in accordance with the relevant laws. Lian said Leung should explain why he has urged Hong Kong, which is far more advanced in land use, to learn from Tianjin, which lags on that front. “What did Hong Kong learn from Tianjin? What Tianjin lessons have been adopted and implemented in Hong Kong in the past three years?”

Secondly, Lian said Leung should explain what advice he had given to Tianjin since he became its adviser. “How come Tianjin had made such serious blunders in land planning as revealed in the explosions?”

Thirdly, Lian wrote Leung should give an answer to the question of why Hong Kong should learn from Tianjin, but not the opposite. “Why (Hong Kong as) adviser has become a student?”

The Tianjian warehouse explosions have emerged as yet another grim and sad reminder to people who take a bullish view of China for them to take a more down-to-earth approach on the state of the 13 billion-populated nation.

Though ranks as the second-largest economy in the world, China lags Hong Kong and many other developed, developing nations when it comes to land management, city planning and a range of other developments.”