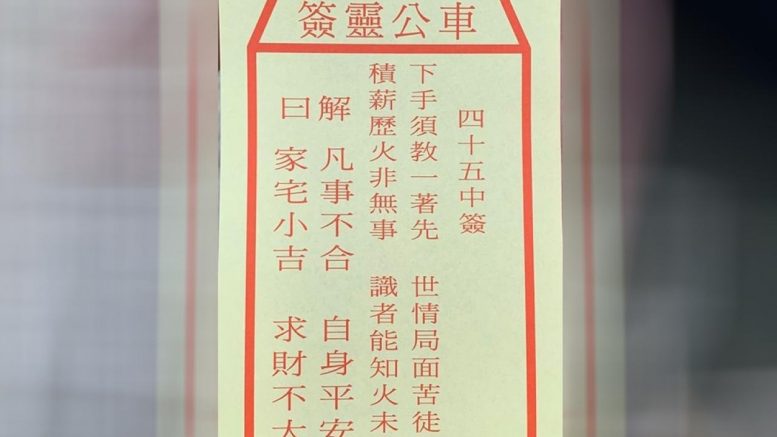 A fortune stick picked at Che Kung Temple for the Year of the Ox gives a warning of the danger of turning deaf ears to public discontent.

Hong Kong people need no Che Kung, a legendary general in the Song Dynasty (960 – 1276) being worshipped as a god, to tell them the city is and will be in deep trouble. But when a rural leader picked a fortune stick for Hong Kong for the Year of the Ox, it caused a disquiet in the society.

Though categorised as “average” in terms of fortune, the stick gave a high warning to the Government and the central authorities of the danger of turning deaf ears to the voice of public discontent towards the state of the Hong Kong SAR.

The stick was picked by Heung Yee Kuk Chairman Kenneth Lau on Saturday, the second day of the Lunar New Year, as part of the annual tradition.

Written as a poem in Chinese, the omen from stick 45 drawn by Lau roughly translates as: “One must discuss with others before making a move, the world situation is miserable and in vain.”

“The firewood accumulated and the fire that’s been experienced is not nothing; knowledgeable people know the fire is not yet lit.”

Lau said this prophecy showed that Hong Kong is facing major challenges. “Every step in this chess match is very important at this stage, if right now the government is not decisive and makes a wrong move, there’s a big problem, the fire will get bigger,” he said.

That the prophecy bore stunning resemblance to Hong Kong currently steeped in crisis since the anti-extradition bill protest evolved into social turmoil has bewildered many Hongkongers; it has deepened the feeling of helplessness and doom in the society.

Their pessimism is not unfounded. 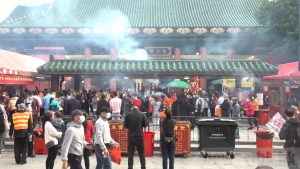 First rocked by the 2019 protests and then devastated by the Covid-19 pandemic, the city is urgently in need of an early end of the political restlessness prevalent in the society and the outbreak of the deadly virus.

For that to happen, the Government ought to stop adding firewood, not to mention oil, to the blaze that has not yet been fully extinguished. On the anti-virus front, the Carrie Lam administration ought to do the right things and do them right to regain public trust  and confidence in the battle against Covid-19.

The Lam administration has failed miserably in both battles.

The political repression of the pro-democracy force has continued with no sign of easing. The opposite is true. The battle against Covid-19 is still fraught with chaos – with more is likely to come.

In addition to the long list of ongoing prosecutions against democrats for offences ranging from subversion to collusion with foreign forces and unauthorised assembly, a new round of ousting pro-democracy district councilors will begin as soon as a new law is rubber-stamped by the Legislative Council by July.

Speculation is rife that the 2020 Legco election, which has been deferred to September, may be further postponed for a thorough change of the electoral rules, which is aimed to eliminate dissenting voices in the legislature.

In addition to a revamp of the Legislative and District Council, a string of new initiatives are being mooted to impose greater social control. In late January, the Government launched a month-long consultation on a new requirement for people to provide their full names, date of birth and identification numbers when buying mobile phone SIM cards, similar to a rule in mainland China.

The move has sparked fears of intensified surveillance of political opinions and conversations via mobile phones.

Early February, Chief Executive Carrie Lam announced a set of five legislative plans before the current session ends by July. They include plans to tackle “fake news” and make doxxing a criminal offence.

She has also said they will review the present arrangements for access to public records, such as vehicle registrations, property transactions and corporate filings. The move raises fears among journalists that access to information may be further restricted, making it more difficult for them to conduct investigative work.

Meanwhile, the Government has stepped up cooperation with universities to upgrade its contact-tracing app, LeaveHomeSafe, so that it can automatically record people’s entry and exit times at venues. The move has given rise to concerns about privacy and government surveillance.

In a related move, Police Commissioner Chris Tang said the Police Force was studying various non-lethal weapons, such as pistol-sized pepper ball launchers, so as to provide officers with an alternative to firearms.

Put together, the Lam administration has learned nothing from their serial mistakes since 2019 and made no attempt to heal the wounds of the society. It has done the opposite by adding more firewood and playing fire.

One needs no knowledge of rocket science to know it is a dangerous game to play.

This article was first published on Apple Daily website on Feb. 17.