With the pro-democracy camp already being torn into pieces, Beijing’s move to revamp the city’s election system to ensure “patriots ruling Hong Kong” is putting the last nail in the coffin – and the “one country, two systems” policy itself to rest.

To ensure most, or perhaps, all seats in the Legislative Council and District Council going to those they considered as patriots, Beijing, as they have indicated clearly, will lead the task of formulating the election system.

It makes mockery of the pledge of “Hong Kong people ruling Hong Kong”, which, together with “high degree of autonomy”, form the integral parts of the policy of keeping two systems under the tenet of one country.

But now, Beijing will have the sole power of dictating the electoral arrangements for both Legco and district councils.

First floated through the pro-establishment circle in the past two months, Beijing stepped up the propaganda of the principle of “patriots ruling Hong Kong” in the past week featuring an avalanche of publicity in official media including Xinhua news agency and pro-Beijing newspapers in Hong Kong . 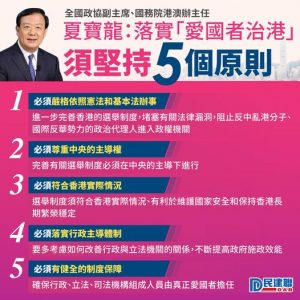 On Monday, head of the State Council’s Hong Kong and Macau Affairs Office, Xia Baolong, gave a speech at a closed door seminar hosted by a think-tank affiliated to his office.

Referring to the pro-democracy force, he said those who “oppose China and disrupt Hong Kong” were able to exert their influence in the city in the past. Xia argued that is because the principle of letting patriots rule Hong Kong was not fully implemented.

The most pressing issue now, he said, is to refine the election system and “plug the legal loopholes,” without specifying.

The reform must be led by the central government, he said, adding they will communicate with the SAR government and listen to the views of people from all walks of life.

Xia’s pledge does not hold the water. Despite rife speculation about the imminent drastic change of the electoral system, the central authorities have neither confirmed the move, let alone giving a hint of what the changes are and their timetable.

One can only make a guess that Xi’s speech is aimed at paving the way for the tabling of a resolution on the changes of the electoral system through an amendment of the relevant provisions in the Basic Law at the upcoming National People’s Congress plenum. The session is scheduled to be opened on March 5.

First mooted by late patriarch Deng Xiaoping at a meeting with Basic Law drafters in the 1980s, the notion of “patriots ruling Hong Kong” has not been stipulated in the post-1997 constitution for obvious reasons. It is not a well-defined notion, which could be conveniently interpreted to target people with dissenting views.

Now that the democrats have been kicked out from Legco and a fresh round of oustings of democrats at the 18 district councils looks imminent, Beijing lost no time to change the game rules to block those they deem as “non-patriots” from sitting on the two councils.

That seems to be a mission impossible only made possible by distorting the meaning of election.

The figures speak for themselves. With no exception in all previous Legco elections, the pan-democrats have snapped out a majority of votes cast in geographical constituency elections.

It is unthinkable that voters will now heed the advice of Beijing to shun the democrats and cast their votes on candidates deemed as patriots.  The opposite is true. Pro-China labelling will be even a bigger liability to “patriot” candidates in the next elections.

Instead of holding out hopes that the pro-establishment camp will win the ballots, Beijing has decided the best way to secure the seats for the patriots is for them to control the elections through the exercise of their absolute powers.

They will possibly involve political screening of candidates during the nomination period and another “patriotism testing” of candidates who win the polls.

In a nutshell, the changes to the electoral system tipped to be unveiled soon look set to be a big shock and a fatal blow to the “one country, two systems” policy. Worse, Beijing no longer seems to care.

This article was first published on Apple Daily website on Feb. 23.

Be the first to comment on "‘Patriots’, not Hongkongers, to run Hong Kong"