A primary school teacher who was de-registered by the Education Bureau for allegedly spreading Hong Kong independence thinking at a Primary Five session writes to say thank-you to his supporters.

On the face of it, the judicial review lodged by a fund set up by former Chief Executive Leung Chun-ying to help aid the arrest of “national security law offenders” is targeting the Education Bureau.

Leung has taken the bureau to court after they rejected his demand of disclosing details of teachers who were found of professional misconduct.

But taking the unusual legal action, Leung was indeed setting his eyes on a much bigger target, namely the city’s teachers’ sector led by the pro-democracy Professional Teachers’ Union.

Set up by Leung last year, the 803 fund hit headlines when it offered rewards of up to HK$1 million to anyone who provides information that leads to the arrest and prosecution of anti-government protesters.

In an intriguing change of its target last week, Leung said the fund has filed a judicial review against the Education Bureau for its refusal of disclosure of details of teachers who were found of professional misconduct over last year’s protests.

Leung, a vice chairman of the Chinese People’s Political Consultative Conference, and supporters of the move argue parents and the public have the right to know who those teachers are.

Secretary for Education Kevin Yeung maintained the Education Bureau has been seriously handling complaints against teachers according to existing procedures, and the bureau has always been a gatekeeper to protect students’ interests and ensure teachers’ professional conduct.

He added teachers should be given a chance to improve with the help of the schools and the bureau.

To Leung,  that is not good enough. He wants a “death penalty” for teachers who were found of misconduct, not leniency, nor a second chance.

A disclosure of the names of teachers who were found of professional misconduct could mean the end of their teaching career. Schools will be under enormous pressure from parents and society at large for them not to hire those teachers. 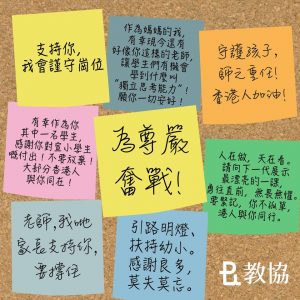 Supporters give backing to the primary school teacher who was de-registered for allegedly spreading Hong Kong independence thinking among a Primary 5 class.

Anxiety and fear will then prevail among local teachers, who will have to be more mindful of their deeds and words at classrooms, on social media and in public. Chilling effect will worsen self-censorship among teachers for fear of losing their jobs.

This is exactly what the teacher-bashers in the pro-establishment camp want, nevertheless, in their intensified attack on the policy bureau and local teachers.

The pro-establishment force has not been shy from showing their dismay over what they called teachers who are “yellow”, or pro-democracy.

At a closed door meeting with the Central Government’s Liaison Office last month, pro-establishment legislators are said to have singled out three forces as “three big mountains” that they should target during the extended legislative session, which will last for 12 months beginning next week. The other two sectors are social welfare and judiciary.

They are among the sectors that the pro-establishment camp has blamed as the forces behind the city’s Occupy Central in 2014 and the anti-extradition bill protest last year. Both saw large-scale participation of students in secondary schools and universities.

Pro-democracy teachers, in particular those who teach General Studies, have been blamed for the growth of radical thinking and acts among students.

Although Leung’s move to take Yeung to court is still at its early stage, his political offensive seems to have already achieved early results.

On Monday night, the Education Bureau announced the cancellation of the registration of a school teacher it says has used pro-independence materials in classes. The teacher has become the first to be struck off from the registrar since the protest erupted in June last year.

Of the 247 complaints of teachers’ misconduct received, the bureau said 70 were found to be substantiated. Those teachers have been given punishment including reprimand and written warnings.

The tally of substantiated cases is not likely to meet the appetite of teacher-bashers, who do not just want teachers to stay away from sensitive topics such as democracy and civic rights, but indoctrinate students with national education in classrooms.

A political campaign aimed to right what Beijing and local patriotic camp deem as the wrong thinking of teachers has just begun in earnest.

This article was first published on Apple Daily website on October 7, 2020.