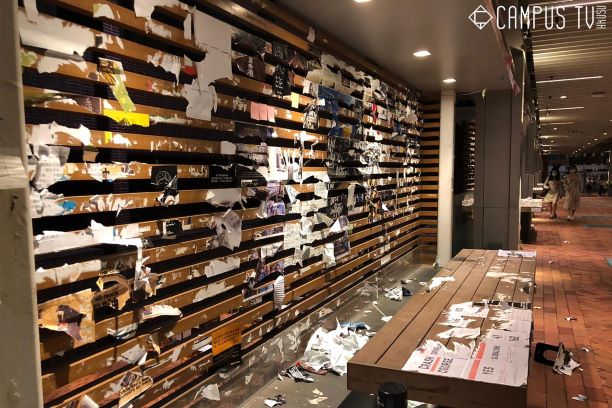 More than 30 people from a local patriotic group tear down pro-democracy posters on the 'Lennon Wa' at HKU campus.

What do University of Hong Kong (HKU) and Radio Television Hong Kong (RTHK) have in common? Both are among the institutions that make Hong Kong shine. As the city’s leading university and the broadcaster of the people respectively, they have embodied its strengths and values and cultures. They are the symbols of the city, which are free and open, diverse and inclusive.

A string of recent incidents relating to the two institutions, however, has stoked fears they have one more in common: a destiny towards decline, like Hong Kong.

On Saturday night, a group of about 30 unidentified people tore down pro-democracy posters and messages posted around HKU’s Pokfulam campus. In a video shared on social media, a member of the group referred to themselves as “a group of ordinary Hong Kong citizens” said they “did not want their children to attend an unclean institution.” They said they were “cleaning Hong Kong of its rubbish.”

It is difficult to confirm whether they are parents of students currently studying at HKU. If yes, one can assume it is their own decision to send their children to study at an “unclean university”.

And assuming they or their children came from the mainland, they should have plenty of other choices outside China if they do not want them to study in the mainland. United States, Britain, Australia. The list goes on.

Why chose HKU and other universities here? The most plausible answer is that they want to have their children studying in a capitalist free society, unlike the socialist mainland where the ruling party controls everything.

Let’s be honest. They want to pay more for a freer place for their children’s university education, thus paving the way for them to develop their career or perhaps find a new home outside mainland China.

Against that background, it could not be more ironic that they found the pro-democracy posters and messages posted on the HKU’s “Lennon Wall”, which are part and parcel of the Hong Kong free society, as unclean and therefore rolled out their sleeves to tear them down.

What’s the point of sending their children to study in HKU if they want to “clean” of its parts they found unpalatable.

If they have been keen to remove the political messages from the campus, they have done the opposite, pouring more oil to the fire of polarised politics. It will make the university campus more restless and the conflict between local students and mainland students worse.

The government-run public service broadcaster is in hot water this year after it became a target of attack by the Police over alleged biased and unfair coverage.

One of the cases involved a show of the current affairs satire Headliner, in which an artist dressed in lookalike-police uniform, popped up from a rubbish bin to report crime stories. The government-appointed Communications Authority has ruled a complaint against one of the shows as substantiated. The broadcaster said there will be a review of the programme after the end of the summer season. There is no sign of a return of the programme. 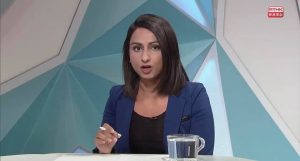 Nabel, the RTHK reporter in headlines.

Earlier this month, a commentary programme “Pentaprism” had quietly gone down the lane of history following its suspension in the wake of a handful of complaints lodged by the Police.

Some current affairs programmes aside, Nabela Qoser, a reporter, became the target of attack by pro-establishment camp for her aggressive style of raising questions at government press conferences, in particular the one chaired by Chief Executive Carrie Lam after the Yuen Long attack on July 21.

The RTHK management decided to reopen an investigation into complaints against her and to extend her probation by four months.

Qoser had asked Mrs Lam and her team at the July 22 press conference whether they slept well on the night of the horrific attack and their response to accusations of collusion among the government, the police and the triads.

Some may say Qoser was hostile and provocative in the way she phrased her questions and the way she raised them. It is a matter in the eyes of beholders. One thing is clear: the questions were not instantiated in view of the depth of public fury and doubts about the Police’s law-enforcement, or the lack of it.

It is absurd that the reporter who raised those questions is now facing the axe and that the top officials who were humiliated when they failed to answer Qoser’s questions put the blame on her and moved to take reprisals against her.

The ordeal of Qoser has blown more chilly air across the media landscape. Fearful of being complained and targeted, reporters may stay clear of difficult, provocative and unfriendly questions at government press conferences.

In a sense, government officials may want to purify the RTHK and universities, removing reporters who may offend the power and the rich and pro-democracy message that may embarrass them.

By doing so, they have inflicted more damage to the city’s two important institutions, giving another push to the city on a downward slope of decline.

This article was first published on Apple Daily website on September 30, 2020.

Be the first to comment on "RTHK, HKU in common destiny of decline"