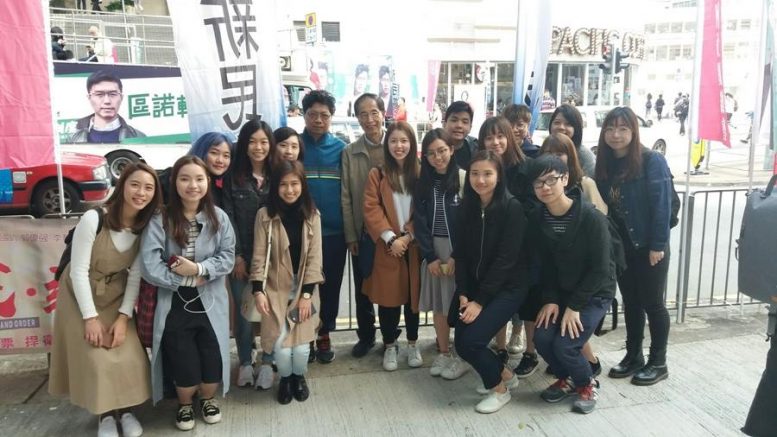 Shue Yan journalism students take picture and Martin Lee during a visit to a vote-canvassing site in the Legco by-election in March.

Below is the full text of a letter to journalism students for RTHK’s Letter to Hong Kong programme broadcast on August 5.

How’s life after you finished your four-year journalism study in May? Are you enjoying the precious break before looking for jobs? Are you pondering about the question of ‘to be or not to be’? To be, or not to be, a journalist. I don’t honestly have a must-take advice for you. This is plainly because of the environment, both at macro and micro levels, for passionate and talented journalists to do what they are aspired to do is getting worse.

On last Sunday, there are two pieces of news about the media themselves, bad ones at least on the face of it. In the United States, President Donald Trump and the publisher of The New York Times, A. G. Sulzberger, were locked in a fierce clash over Trump’s threats against journalism. Trump revealed on Twitter he and Sulzberger had discussed “fake news” and how that fake news has morphed into phrase, “Enemy of the People.”

Sulzberger later issued a statement, saying he had warned Trump although the phrase “fake news” is untrue and harmful he was far more concerned about his labeling journalists as “Enemy of the people.” He was worried Trump’s inflammatory language would contribute to a rise in threats against journalists. Sulzberger warned Trump was undermining the democratic ideals of their nation.

The war between Trump and American media sounds remote. It also seems to be too dramatic to be something real. That the real-life battle has indeed been going on for months in a country arguably known as a beacon of freedom and is renown for its free press is troubling. It adds gloom to the worsened environment for journalists to do their job in arguably one of the freest countries in the world. Chilly winds are blowing on the other side of the Pacific Ocean. 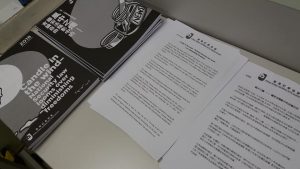 Doubters and critics have a point to question whether we are overly pessimistic. Some reporters have raised questions at our press conference and interviews thereafter about whether our concern about self-censorship over politically sensitive stories could be substantiated with concrete cases. Those are fair and legitimate questions reporters should ask. I have to admit it has never been easy to ascertain a case of self-censorship. Journalists or columnists involved understandably tend to be reluctant to speak publicly. In one of the articles in the Annual Report, a veteran journalist who now teaches journalism in university has detailed some subtle ways of censorship in the work process inside newsroom.

The report has also documented several suspected cases of self-censorship including the retraction of a business column from the website of the South China Morning Post shortly after it was posted. The column alleged links between a Singaporean investor and a top aide of President Xi Jinping. It was removed with a clarification stating that the piece was deleted as it included “multiple unverifiable insinuations.” The columnist, Shirley Yam, said she stood by her report. We put the different sides of the story on the record for the public to judge.

As we keep a close watch on media self-censorship, we are mindful of the danger of being interventionist and speculative over the way fellow journalists handled their stories. Being seen to be interfering with the editorial independence of media outlets is the last thing we want. But in view of the growing political and capital power of the mainland in Hong Kong, there are growing concerns that pressure for journalists to censor their work has and will become more subtle. It is vitally important for us to maintain an even higher level of vigilance against any threats to the city’s core values of freedom of speech and freedom of the press.

The First Amendment to the United States Constitution legally protects freedom of the press in the U.S. If there is anything we can learn from the battle between Trump and American media, it is the grim reality that press freedom cannot be taken for granted. There are always threats from the power and the rich against journalists who refuse to be frightened and to be bought. Journalists and society should stay vigilant and strive to preserve an independent and free press.

The importance of an independent and free press cannot be emphasised more. Just take a look at the stories about the plight of Liu Xia, widow of late Chinese dissident Liu Xiaobo, and poisoned products scandals, including baby milk powder and, more recently, vaccine. It has laid bare the dire consequences of a system with powers being exercised without effective checks and balances by an independent media and civil society.

When the going gets tough the tough gets going. For those who have passion and commitment to become a watchdog journalist, now is a good and challenging time to brace against the wind.

Wish you all a bright future!

Be the first to comment on "Tough time for journalists"