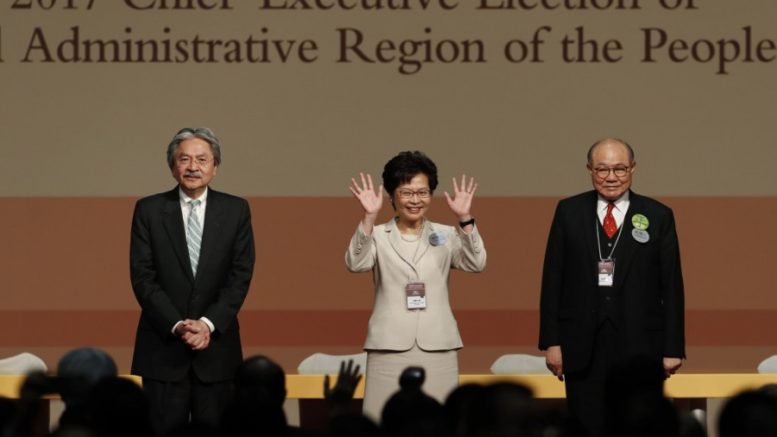 Carrie Lam grabs 777 votes to become the next chief executive.

British Poet Percy Shelly wrote, “If winters comes, can spring be far behind?” This time in Hong Kong, spring has arrived. But when it comes to the city’s political climate, winter seems to have refused to go. Hopes for the arrival of spring with the imminent departure of C Y Leung are anything but certain as the Chief Executive election is unfolded. Around noon time today, we should know who will be the next chief executive after the Election Committee members cast their votes. Barring last-minute drama, former chief secretary Carrie Lam will be elected, replacing C Y Leung on July 1 to lead Hong Kong in the next five years. The question is now no longer a question of if, but how many votes she will get. (Mrs Lam won the election with 777 votes.)

But to many people, they are more concerned about a bigger question. If elected, will she be able to make a difference, a big difference, in the next five years? Judging from opinion polls, many people fear the answer is no, or maybe. They feel worried political squabbles and Legco filibustering will remain the new normal of Hong Kong politics. Divisiveness will not be eased. The city will be in a standstill. They will be asking the same question: when will the political winter come to an end?

The prevailing mood of uncertainties and anxieties in some quarters of the society is sadly in contrast with the feeling of elation when C Y Leung made a surprise announcement on December 9. Citing family reason, he said he would not seek re-election. The jittery citizens felt relieved and hopeful that the days of agony and frustrations about the shape of the city under the leadership of C Y Leung will be numbered. Come July 1, Hong Kong will be able to make a fresh start under a new leader. Their hopes are not unfounded.

They have reasons to believe Beijing has heeded their voices of not keeping the unpopular and ineffective leader after his current term expires. Beijing’s move has given a boost to their confidence that the leadership has walked an extra mile to seek conciliation and foster harmony in the city since they began to do so beginning from spring last year. Remarks made by a senior Beijing official Wang Guangya in an interview with the Bauhinia monthly magazine published in January have raised hopes that Beijing would like to see a contested election with genuine competition. Wang said Beijing would study the manifestos of candidates carefully. He expressed hope that the election would be “rational, healthy and constructive.”

Beijing’s hopes are understandable. The 2012 CE election had been fraught with scandals, mud-slinging and controversies. The bitter rivalry between C Y Leung and Henry Tang had split the pro-establishment camp during the campaign. The wounds have not yet been fully healed since then. By the time when this letter is recorded, there are no big scandals relating to any candidates that could change the results. True, conspiracy theories were abound. Political hearsay was aplenty. At election forums, there were sharp exchange of words between candidates. But the whole process has been largely civilised and restrained, peaceful and clean. Credit should go to the three candidates. 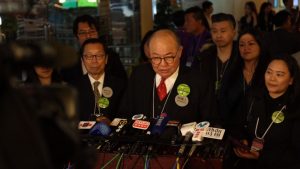 The positives of the election, however, have been diluted by the alleged arms-twisting and hard lobbying tactics adopted by the central government and the Liaison Office in Hong Kong in soliciting votes for their preferred candidate. Local media have widely reported that some Election Committee members had been bombarded with phone calls from the Liaison Office for them to back Carrie Lam. There were also a lot of media reports saying China’s top official in charge of Hong Kong affairs, Zhang Dejiang, had travelled to Shenzhen last month to meet with pro-Beijing, pro-establishment leaders. He was said to have given a clear message that Carrie Lam is the only candidate they support. Meanwhile, unlike the previous CE elections, mainland officials have repeatedly stressed in the past few weeks that the central government’s power of appointment of the chief executive is substantive. They aimed to give a soft, but clear, warning that they may or may not necessarily endorse any candidate who wins today.

To be fair to Wang Guangya and other mainland officials, they have never promised categorically that they would like to see genuine competition – and that they would accept any election results accordingly. It is only reasonable and fair, however, for Hong Kong people to expect the central government means what they said when they laid down the support of Hong Kong as one of the four criteria of electing the next CE. Put together Beijing’s remarks on their support of Carrie Lam and their substantive power of appointment, it is apparently clear that the central government is only happy to accept the results they like to see. This hardly matches Wang’s hopes of a “rational, healthy and constructive” election. Worse, it has raised serious questions about whether the election is fair and open. The fairness of the election will be in doubt if the results do not reflect public opinion. Its openness will become questionable if concerns about behind-the-scene manipulation are not allayed.

With the current Leung administration still more than three months to go, it is too early to give a full verdict on his five-year leadership. But the voices of people for a new beginning on July 1 that features change and hope, peace and progress have been loud and clear. The months-long election process would have been a golden opportunity for the society to rally together and throw their weight behind the best hopeful who can turn the wishes to reality through a fair, open and honest election. It would have been a process of putting an end to the feeling of futility and hopelessness and opening a new era of hope and progress. History will judge whether the decision made by the 1,194 Election Committee, or perhaps more accurately Beijing, is a chance taken or an opportunity lost.

This is Chris Yeung’s Letter to Hong Kong broadcast on RTHK Radio 3 on March 26.

Be the first to comment on "Is Hong Kong spring still far behind?"