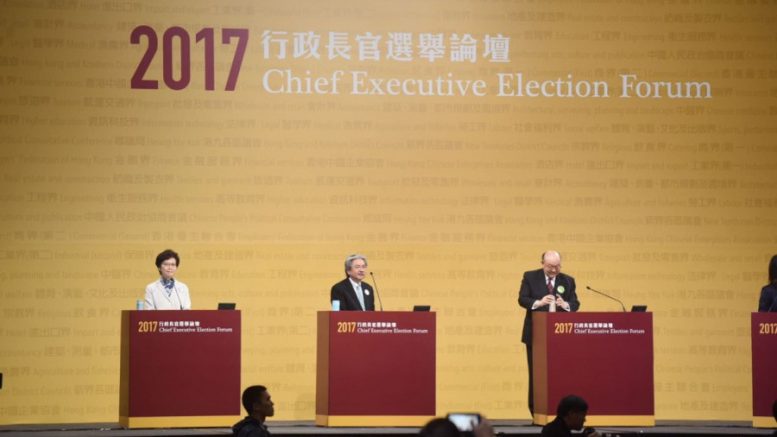 Three candidates vying for the post of Chief Executive attend the Election Forum hosted by the Election Committee Sunday night.

Let’s face it. In an important aspect, Sunday night’s Chief Executive election debate is an non-event. The verdict of Hong Kong people on the performance of the three candidates and their preference for the top post will make little, if any, impact on the result of the election next Sunday. Yes and no.

Yes, most the pro-establishment members in the Election Committee have thrown their weight behind Carrie Lam Cheng Yuet-ngor, former chief secretary, even before they sat down with her to hear what she stood for, not to mention the announcement of her election platform and the Sunday forum.

But no; it is neither wise nor realistic for the Election Committee and the central government to dismiss the importance of public trust and support for the next chief executive. That Leung Chun-ying has become hamstrung by low popularity as soon as he took office in 2012 has emerged as a critically important factor behind his governance failure.

If the pro-establishment electors lacked enthusiasm, at least in raising questions, at last night’s forum, it is not difficult to understand.

Any doubts about Beijing’s blessing on Mrs Lam have largely been laid to rest in the wake of the trip of Zhang Dejiang, chairman of the National People’s Congress and Politburo Standing Committee, to Shenzhen last month.

During a series of closed door meetings with pro-establishment leaders that lasted for two days, he spoke in length on the strengths of Mrs Lam as the next chief executive and gave an equal length of bad words on why her main rival John Tsang Chun-wah is not up to the top job.

Despite the failure of Mrs Lam to overtake Mr Tsang, or shorten their distance, in the popularity race, Beijing’s backing for Mrs Lam has shown no signs of a rethink since then. With no sign of a rethink, her victory on Sunday has now been seen as a foregone conclusion within the pro-establishment camp and society at large.

Most opinion polls found Tsang was leading with a clear, double-digit margin on the question of who they will vote for if they have the right to vote. But when it comes to the question of whom they think will become the next chief executive, more than half say Mrs Lam.

It is probably because of the prevailing mood among the pro-establishment Election Committee members that the race has entered its rubbish time that they seem to have lost their enthusiasm in grilling the contenders, or more accurately Mrs Lam’s rivals, at the forum. 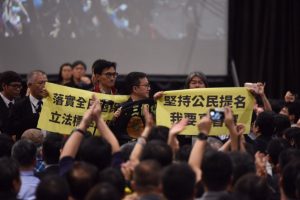 Of the 20-odd Election Committee members who got a chance to raise a question through drawing lots, almost eight out of 10 are pro-democrats. It may be pure coincidental. But there are reasons to believe the loyalists have not made their best efforts to seize an opportunity to raise a question by putting more requests. As they outnumbered the pan-democrats in the Election Committee, they should have a higher chance of taking the candidates to task.

This has proved to be important for simple reasons. As it turned out, Mrs Lam was bombarded by pan-democrats on her integrity, a wide range of issues and campaign controversies.

Already faced with Mr Tsang and another rival Woo Kwok-hing who was more critical of Mrs Lam than Mr Tsang, Mrs Lam was being battered from various fronts during most of the 140-minute forum.

But if she is again beaten by Mr Tsang last night, it is mainly because of her failure to fight back major criticism against her from the combative rival.

Mr Tsang cited surveys to show Mrs Lam’s opponents have outnumbered her supporters, which he described as “unprecedented” in previous elections. With public support and backing from the pan-democrats, he warned a chief executive with three “lows”, namely low popularity, low political capacity and low legitimacy, would not be able to lead Hong Kong. 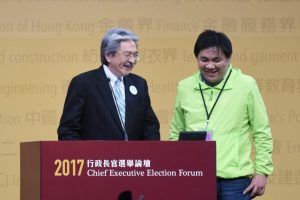 He took the initiative to attack Mrs Lam again that Hong Kong would see incessant divisiveness, or what he called “divisive 2.0”, if she succeeded Leung Chun-ying.

Mrs Lam has sought to harp on the theme of unity, and made rebuttals against criticism and attacks on the weak points of Tsang such as his laid-back work style. But her offensives were either back-fired or ineffective.

Her eleventh-hour cancellation of a visit to Tin Shui Wai to meet with grass-roots residents on Saturday makes a mockery of her vows of reaching to all people. Her apology did not help.

Citing a list of retired senior officials in her campaign team, she has tried to refute claims that she was unpopular among the senior echelon of the government. It was unclear how many of them turned up at the forum last night. But the presence of former development minister Mak Chai-kwong and former health permanent secretary Sandra Lee Shuk-yee, in Tsang’s campaign jacket, with his team speaks louder than words of the depth of backing.

Seeking to contrast her hardworking with Tsang’s laid-back style in an answer to a question, Mrs Lam said she felt “envy” with Mr Tsang when she found there no piles of papers on his desk, unlike hers, during a visit to his office.

In his rebuttal, Mr Tsang said people should not just work hard, but work smart. “A person who is competent and can finish all the tasks is a good employee, but not a good leader.”

Post-forum polls are likely to show Mr Tsang has done a better job and both Woo and Mrs Lam Okay. Barring surprises in the next six days, Mr Tsang looks set to be the winner in the contest for the hearts of ordinary people.

The 870-odd pro-establishment electors face a dilemma of whether they should vote for the “only candidate” Beijing backs or most Hongkongers support. They can choose to ignore Sunday night’s forum and events of the campaign so far.

But just as many of them did in the 2012 election, they will have to feel comfortable that they vote out of their conscience and that it is in the best interest of Hong Kong and the country.