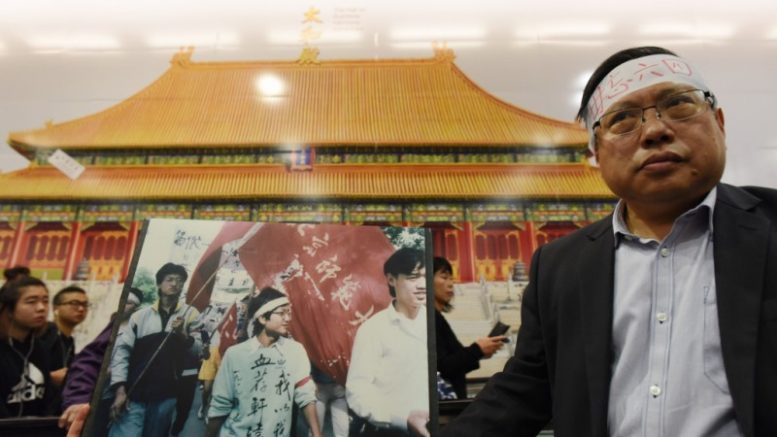 Make no mistake. This is not Tiananmen Square, nor 1989. Democrat Albert Ho, whose headband carried a slogan, 'not to forget June 4', protests at Central MTR station, where an exhibition of Beijing Palace Museum is underway.

By eliminating Leung Chun-ying from the upcoming chief executive race last month, Beijing is holding out hopes peace and harmony, in relative term, will be restored in the city in the next six months. That will only be good for the election of the next chief executive on March 26 and his or her term starting from July 1 and, also importantly, the celebration of the 20th anniversary of Hong Kong’s return to Chinese sovereignty on the same day.

Hopes turned wishful thinking shortly after Leung announced he would not seek another term on December 9. One day later, his deputy Chief Secretary Carrie Lam Cheng Yuet-ngor, who has been dubbed as “Leung Chun-ying 2.0” or “female CY Leung” dropped a strong hint she would run to carry on Leung’s policies, among other goals. It fuelled anxities among the Leung-bashers that the next five year would be run by another “C Y Leung” along the path he had set.

Anxieties turned fears as Mrs Lam made a surprise announcement a Palace Museum will be built at the West Kowloon Cultural District with exhibits provided by the national museum in Beijing and the bill of the HK$3.5 billion building cost footed by the Hong Kong Jockey Club.

The initial reaction of the society was mixed. Most people found nothing wrong in the museum, or no harm, to say the least. But they were bewildered by the veil of secrecy. Defending the need for secrecy in the course of yearlong discussion, Mrs Lam described the level of confidentiality as a case of “even a drop of water will not spill out.”

Mrs Lam may feel proud of the success in keeping the project in wraps. Many are unconvinced and irked. Isn’t it the Government that has been religiously trumpeting the notion of “due process” and “procedural justice” in its governance? Aren’t those “procedural” matters what a rule of law system is about?

That Mrs Lam seems to have circumvented the rules to suit the Government’s political imperatives has tarnished the glamour and charm of the exhibits of the palaces in the last dynasties of Imperial China.

Further revelation about the irregularities in the appointment of a design architect of the museum months before the board of the West Kowloon body decided to adopt the museum plan has bred more doubts and suspicion.

With more questions raised after she gave an account on the project at a Legislative Council meeting on Friday, Mrs Lam, who said her Palace Museum was a showcase of her “proactive” work style, preferred inaction. She stonewalled questions raised by reporters on various occasion in the past three days.

A six-week consultation exercise, which will be limited to questions of how but not whether or not to build, scheduled to begin on Monday has been deferred an hour before it was due to start.

The West Kowloon Cultural District Authority said it would have to wait until after a board meeting is held on Tuesday. 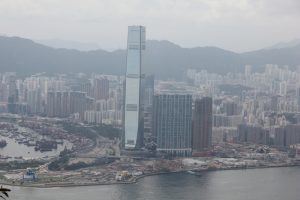 First mooted in 1999, the West Kolwoon Cultural District remains a cultural hub under construction at the waterfront.

As public discontent over the procedures of the Palace Museum project spread to its substantive aspects, the row has spilled into a highly political sensitive zone.

On Monday, images of the hunger strike of Beijing students at Tiananmen Square in the summer of 1989 set against a giant exhibit featuring the Beijing Palace Musuem inside the Central station of the MTR greeted the travelers.

Wearing headbands written with a slogan, “Not to forget June 4,” a group of protestors from the Hong Kong Alliance in Support of the Patriotic Democratic Movement in China, founded at the heydays of the 1989 demonstrations, staged a protest against the Palace Museum project.

There is no doubt the Central station will not become Tiananmen. But embarrassment to the various parties aside, the political antics have exposed the underlying tension in mainland and Hong Kong relations worsened in the past few years.

The imminent departure of Leung from the citadel of power will not bring about a dramatic warming of ties between the two places.

As the row over the Palace Museum shows, the cross-border relations are fraught with inherent contradictions and vulnerable to conflicts, both procedural and substantive, over matters that carried political connotations. A symbol of power, the Palace Museum can hardly stay clear of politics. Like it or not.