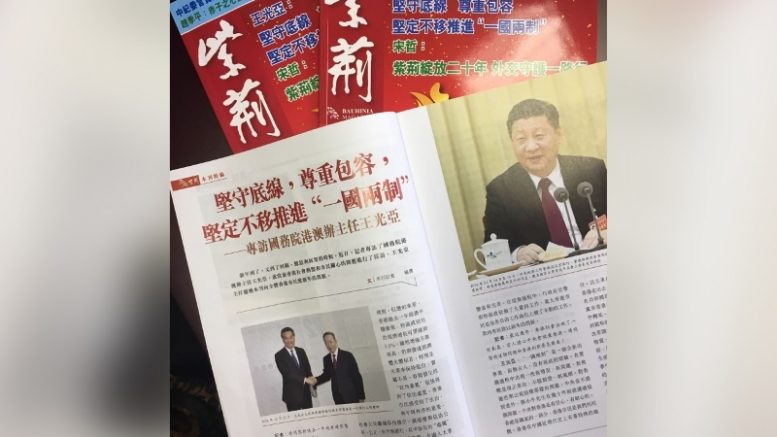 Wang Guangya, Hong Kong and Macau Affairs Office Director, sets out tasks for the next chief executive in an interview with Bauhinia magazine.

The 2017 chief executive race entered a new phase as a key mainland official in charge of Hong Kong affairs set out major tasks for the successor of Leung Chun-ying.

In an interview with the January edition of the Bauhinia magazine, Wang Guangya, director of the State Council’s Hong Kong and Macau Affairs Office, has also reiterated four basic criteria for the next chief executive.

Wang’s remarks on the next CE’s major tasks have shed light on Beijing’s reflection on the 2012 election and initial verdict on the leadership of Leung.

“The CE should also explain to Hong Kong people and implement the central government’s policies through ways that comply with local laws and the city’s situation.”

An informed source said Wang’s remarks on the work requirements for the chief executive largely came from President Xi Jinping at internal meetings.

Wang also reiterated four basic criteria for the SAR chief. The chief executive, he said, should “love China, love Hong Kong,” someone Beijing can “trust,” who are capable of governing and supported by the Hong Kong people, in that order.

The message behind Wang’s remarks, such as the four criteria and the order of which, is a matter of different interpretation. But the message on the departure of Leung Chun-ying at the end of his first term is clear. Beijing hopes to see change in the way the next chief executive governs, regardless of who he or she is.

Admittedly, it is not impossible that Beijing would only like to replace Leung, but not the policy he championed. But that sounds unconvincing and unrealistic that Beijing wants the next administration to follow the “line of Leung Chun-ying.”

It would have been an easy task just giving Leung five more years if the game plan is to continue his policies.

Shortly after Leung dropped his re-election plan, Cheung Chi-kong, an Executive Council member and Leung’s close ally, said the next CE could only move forward along the path laid down by Leung.

Leung’s official spokesman Fung Wai-kwong, whose official title is Information Coordinator, claimed Beijing has ordered the policies of Leung should remain unchanged. Fung did not elaborate. Chinese leaders and officials have never said publicly there was a “line of Leung Chun-ying” in Hong Kong policy.

Beijing has consistently stuck to the line that the basic policies of the central government should remain intact.

Leung allies fight for his legacy

That Leung’s allies have trumpeted the “line of Leung Chun-ying” was aimed to protect his legacy. More importantly, it was a calculated move to campaign for the so-called “Plan B” candidate, namely Chief Secretary Carrie Lam Cheng Yuet-ngor in the public opinion battle against her major rival, Financial Secretary John Tsang Chun-wah.

It is hardly coincidental that TVB news had carried a story quoting an anonymous mainland official saying both John Tsang and Tsang Yok-sing would not be the next chief executive on the same day Leung quit the race.

With the central government’s Liaison Office behind, Leung’s supporters have tried to thwart the “Tsang-Tsang pair” from succeeding the Leung team because they take a different line of governance. 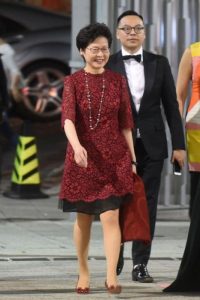 Chief Secretary Carrie Lam is seen as a natural replacement of Leung Chun-ying among his supporters.

In another political act, a delegation of a group calling themselves Silent Majority of Hong Kong was given a high-level reception in Beijing in late November. Speaking after a session with National People’s Congress chairman Zhang Dejiang, team leader Robert Chow Yung said Beijing leader has given hints that a major task for the next chief executive was to fight against pro-independence movement. It was seen as a statement tailor-made for Leung, known for his tough hands against separatism. The question is: why not give Leung five more years if a primary task for the next chief is to curb Hong Kong independence activism.

There is no doubt Beijing put anti-independence highly on its Hong Kong policy agenda. But they fear Leung’s combative approach would needlessly broaden the scope of targets, thus creating more enemies, confrontation and schism. Zhang, the NPC chairman, has already conveyed a message of moderation during his visit to Hong Kong in May.

2017 marks the 20th anniversary of Hong Kong’s reversion to Chinese sovereignty. Beijing hopes the next CE would be able to promote harmony to create an atmosphere conducive to better governance. A chief executive could help serve as a bridge between the mainland and Hong Kong if he or she is able to tell Beijing what happened in Hong Kong “comprehensively, accurately and objectively.” An informed source said Beijing was not happy with the failure of Leung to reflect the views of Hong Kong people during the 2014/15 political reform.

John Tsang said to be given ‘red-light signal’

Speculation was rift before and after Leung’s announcement that Beijing gave “red light signal” to John Tsang for him not to run. An informed source a senior mainland official told Tsang popularity was not the only factor Beijing would consider in its pick of the CE. The CE should also have a much broader scope work, not just one, the official reportedly said, apparently referring to the fact John Tsang has mainly dealt with economic and financial issues in the past eight years. The official’s remarks were seen as a hint that Beijing inclined not to support his bid. The negative impact of the reports on John Tsang, however, was diluted by Tsang Yok-sing, who said Leung had also been asked not to run in 2012, but he insisted and won. 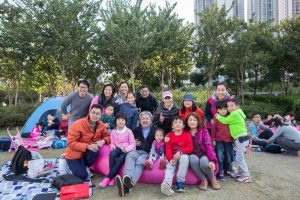 There are no signs John Tsang has thrown in the towel. On the contrary, he has been active paying district visits to meet with ordinary people. Given there has been no strong, solid evidence unfavourable to Tsang’s candidature, it still looks certain his declaration of candidacy is just a matter of time.

With the March 26 election less than three months to go, no hopeful seems to have emerged as Beijing’s chosen one. Beijing might have resigned to the reality that there is no obvious candidate that has a clear edge over their criteria. John Tsang and Carrie Lam, who are likely to be the two leading contenders, have different strengths and weaknesses.

Wang said in the interview every CE candidate should explain their governing philosophy and lead the society to move forward by uniting the people through their campaign. It shows Beijing prefers not to make a decision at this stage.

By giving a yellow-light ready signal for a contested election, Beijing could help ease the tension in mainland-Hong Kong relations and nurture harmony in the post-Leung Chun-ying era.

This is the second of a series of articles on the upcoming 2017 Chief Executive election. A Chinese version has and will be published on a new Chinese online platform, CitizenNews (www.hkcnews.com)