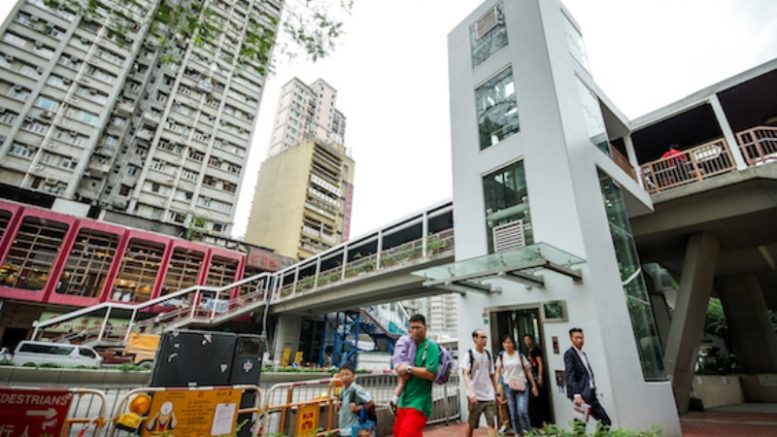 To build a better city by walking the talk of pedestrians' right.

Pedestrians make up almost 90 per cent of residents in Hong Kong, a densely packed city where the grand majority either walk – or walk to and from public transport – to get from A to B in their daily life.

And yet, in a city with relatively low car ownership, there are few groups lobbying for the rights of pedestrians over the use of our crowded, polluted sidewalks.

“Right now no department in the government is responsible for walking,” Maura Wong, CEO of the Civic Exchange think tank, said at a press conference Wednesday last week.

“Pedestrians are not really recognised as a legitimate interest group. That’s why we decided to come together and advocate for pedestrians’ rightful interests. Wouldn’t it be nice if the Transport Department considered walking a mode of transportation?”

Wong was speaking at the launch of a new Civic Exchange initiative called WALKABILITY, along with a panel of newly appointed experts, including architects, designers and members of the business community. 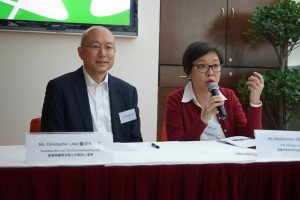 They were not shy about saying that the government needs to take on an issue that affects most ordinary people.

Civic Exchange has long studied what makes this city a good – or bad – place to live. Recent surveys found that Hongkongers were less happy (ranking their satisfaction levels at 5.8 out of 10) compared to those in Shanghai (7.4) and Singapore (7.1). Housing, the cost of living, the education system – not to mention work stress – weigh heavily.

Adding to that is a lack of what experts have called “human” or “people-based” urban planning. That mean designing a city so that its residents don’t feel like ants or drones – just one of thousands inching along a narrow sidewalk, squashed between four lanes of traffic and a bank of towering skyscrapers.

With the next chief executive election nearing, journalists gathered at last week’s press conference were interested to ask Wong and her co-presenter, architect Christopher Law, on how they were going to push the government – and specifically, the next CE – on this agenda.

Law said that car-based urban planning had “enslaved us for 50 years”.

“That kind of mentality has overwhelmed professionals — planners, architects, government officials,” he said, adding that he had to rethink his own mentality. “We’ve been misled. It’s time to have a better, healthier balance.”

Advocacy is one thing, but concrete action is another. At the end of the day, roads, sidewalks and policies related to construction and transportation are in the government’s hands.

Wong said that, when the WALKABILITY expert panel started meeting in November, “one of the first tasks was to try to talk to the government about the 2030+ Plan.”

“We are actually quite encouraged by the conversations we’ve had with some of the government units,” she said. “We expect there will be more exchange going forward.”

In time, recommendations would be made to Chief Executive candidates. “We certainly hope all of them will listen to what we have to say,” Wong said.

The WALKABILITY initiative was mooted in October when Civic Exchange hosted the first Asian edition of the international Walk21 conference, which drew more than 150 global experts to Hong Kong, more than 600 attendees, plus hundreds more at public forums. There, Hong Kong signed the International Charter on Walking, which Wong called “an important symbolic move.”

Civic Exchange took that momentum forward and, in November, began meeting with its group of WALKABILITY experts.

In the weeks leading up to the launch on Wednesday, Wong, a former banker, pounded the pavements herself with a cameramen in tow. They videotaped everyone from domestic workers carrying toddlers, to European tourists, to local fishermen. The question to all was how to improve Hong Kong for pedestrians.

Why Choi Hung is better than Central

Civic Exchange’s latest report has specific neighborhood recommendations. It used West Kowloon as a case study, and includes an artist’s rendition that integrates trees, grass and wide sidewalks with the highways needed to move cars from the Western Tunnel, to Elements, to Tai Kok Tsui’s residential neighbourhoods. 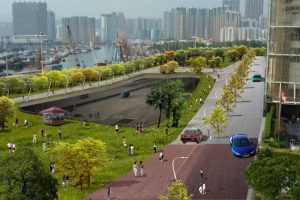 “We were pleasantly surprised,” Wong said. “There were old buildings with canopies, shops, seats, trees. It felt like a community. It felt human.”

Central came in a distant second; with 23 points, it was only deemed “average.” While some areas – like the walkway-linked complexes of IFC, Exchange Square, etc. were convenient – others along the waterfront or in older areas were not.

Mongkok (18 points) and Kwun Tong (11 points) were deemed “poor.” While many people do walk in Mongkok, the experience is unpleasant. Meanwhile, Kwun Tong’s transition from an industrial to commercial area leaves much room for improvement.

Walk to achieve a better city

Law pointed out that walkability did not just mean building endless flats, concrete walkways, as convenient as they may be. He gestured out the window of the FCC, to the streets below. “Right outside are old parts of the city, old markets, places where old ladies talk to each other daily,” he said. “That’s the kind of city we want.”

Law cited U.S. research that showed that, when neighbours recognized each other, they were much more likely to help if they saw another person ill, injured or in trouble.

And because of that, walkways don’t just need to be built – but need to be made comfortable, convenient and sociable.

“Walkability, for us, is really the single most effective way of achieving a better city,” he concluded.

This is an article provided by the Civic Exchange, an independent think-tank. It is last of a series of articles looking at how overseas cities have taken practical steps to improve their streets, with lessons that Hong Kong can learn.