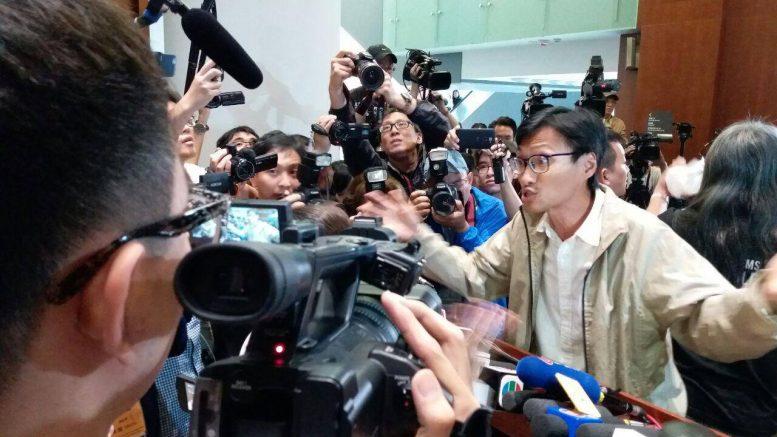 Choosing a career in politics in such a time is difficult, but also inevitable. The democratic movement in Hong Kong had experienced a major setback after the Umbrella Movement. On one hand, Democrats can no longer continue the old tactics of demanding universal suffrage under the framework and timetable set forth by Beijing, which has led to an indefensible stalemate. On the other hand, groups that subscribe to a more radical movement have been largely dominated by the right-wing xenophobic rhetoric, gradually brewing into an ethno-nationalistic movement. My goal in politics is to fill the void between the two, to build what I call the “democratic self-determination” political movement.

“Democratic self-determination” is partly inspired by the ideas of Podemos, an emerging progressive party in Spain. In particular, Podemos emphasizes the importance of community and grass-root democracy. They are opposed to austerity measures and neoliberal-style development. They pay attention to environmental sustainability and to the right of people to reclaim their livelihood.

Supporters of democratic self-determination advocate the right of the people of Hong Kong to break free from the constraints of the Basic Law and the manipulation by the National People’s Congress. We need to regain the right of self-determination that we had been deprived of, unjustly, by the Chinese and British Governments in the early 1980s. The people of Hong Kong should be able to decide on our future political system through a democratic process.

I advocate rebuilding local community organizations so we can improve the livelihood of people through “community self-help programs”. Such programs widen and deepen the democratic movement’s power. For example, a major item of my political platform is to reform the Heung Yee Kuk and the Rural Committees. I challenge the collusion of Government, big businesses, rural clans and triads. I work to end such collusions that have monopolized rural development of Hong Kong so that we can take back a greener future.

Many people will confuse new legislators who advocate democratic self-determination and the one seeking for independence of Hong Kong. The difference is that we, supporters of the former, do not focus on the rejection of Chinese people nor the creation of a Hong Kong nation. We never rally support by inciting inter-communal conflicts. Our focus is to build strong public awareness of democracy in order to form a sustained resistance movement that includes all Hong Kong residents, including new immigrants.

Hong Kong, a colony of over a century, has long been dominated by top-down exploitation, both in our laws and in our politics. Beijing inherited the colonial rule and further exploits the powers enabled by the system. From the manipulation of the Hong Kong University Council, to the use of the ICAC as a political tool, to the current judicial review against the Legco President to prevent democratically elected councilors from taking oath, CY Leung’s policies illustrate how far the government has gone to further this exploitation.

The democratic movement in Hong Kong has long been in a passive state where democratic reform is limited by the framework set by the British and later the Chinese Governments. Beginning in the 1980s, democrats participated in the representative government while demanding for universal suffrage. It took no less than 30 years to receive a universal suffrage proposal for the chief executive election finally in 2014, but one that would allow Beijing to select her favourable candidates.

Right now, the biggest question to the new generation of Hong Kong’s Democratic movement is, if the new goal set out by self-determination is even more difficult to achieve than universal suffrage of the CE and Legco, how can we move forward? I do not have an official answer, only a few ideas.

First of all, being a Legislative Council member does not mean that I only fight in the conference room. I will seize any opportunities that can energize the Hong Kong democratic movement. This whirlwind trip to London to talk about the controversies surrounding Andrew Leung Kwan-Yuen’s renunciation of British citizenship to British media and politicians was such an attempt. If everyone takes a step further without setting any limits to what he or she could achieve, the people of Hong Kong can broaden the frontline of the struggle against Beijing and its agents.

Secondly, as a member of the Legislative Council, I must attempt to strengthen community democratic organizations. The reason for this is simple. The current electoral system is skewed towards pro-Beijing parties. No matter how successful the democrats’ resistance efforts are within the Legislative Council, the most that the democrats can do is to veto the most unpopular of the government’s laws and fund allocations, but the overall strength of the democratic movement will not increase as a result of these efforts.

Since the end of the umbrella movement, the ability of the democrats to mobilize supporters had greatly reduced. At the Legislative Council meeting last Wednesday, only pro-Beijing demonstrators could be seen outside the Legco building. To re-energize Hong Kong’s democratic movement, we must utilize the resources and the mandate given to Legislative Council Members to re-build community teams that put local democracy in action, teams that work on democracy education, teams that promote non-violent empowerment of the community.

Thirdly, we hope to convince other anti-establishment Council members to accept this paradigm shift so we can strengthen the self-determination movement within the Legislative Council. The semi-open Legislative Council elections in Hong Kong are still the most important gauge of the strength of the democratic movement, one that is quantifiable. Any political camps that want to negotiate with Beijing must first have at least half the seats in order to be on relatively equal footing. I believe that self-determination is the new paradigm that has the most promising potential to gain wider support in different generations. A new paradigm having a bigger base will also effectively prevent Beijing from proposing another electoral reform with pre-screened candidates to lure mainstream democrats and divide the camp.

Even though you are half a world away in London, you could imagine how hard it is to realize the vision of self-determination. But look around, has there ever existed a successful democratic movement in the world that reached their goal simply by following prescribed procedures? Didn’t their supporters all stumble and persevere through the peaks of support and troughs of setbacks? At the end, what makes supporters of democracy endure is their insistence on human dignity.
I hope that by the time you return to Hong Kong after your graduation, we will have endured the current trough of frustration, and that more and more people in Hong Kong will have the courage to say “Hong Kong’s future – It is us to decide”.

This is an edited version of the Letter to Hong Kong by legislator Eddie Chu Hoi-dick at RTHK Radio 3 on October 23. Chu represents the New Territories West geographical constituency.