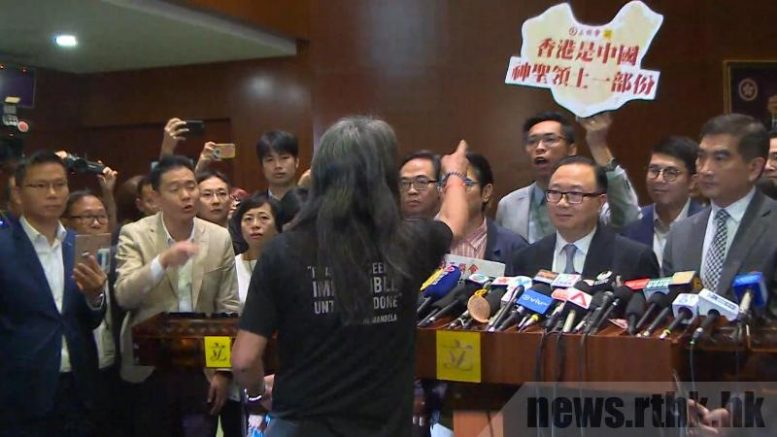 'Long Hair' Leung Kwok-hung is locked in a war of words with pro-establishment lawmakers after they staged a walk-out to block the swear-in of two localist legislators last week.

Let’s call a spade a spade. A walk-out is a walk-out. If Chief Secretary Carrie Lam Cheng Yuet-cheng has persistently lambasted the pan-democrats for fleeing en masse to obstruct a Legco meeting, her show of kindness to the pro-establishment lawmakers’ walk-out aimed to disrupt a swearing-in ceremony last week risks being accused of hypocrisy.

Her double standard over the play of walk-out that leads to a cancellation of meetings due to a lack of quorum makes a mockery of the government’s call for members to fulfil their duty as a legislator, which includes, first and foremost, the obligation of attending a meeting.

Having claimed high moral ground over obstructionism in the tussle with pan-democrat opposition in the legislature, Mrs Lam’s tolerance, if not act of condoning, of the walk-out of the pro-establishment camp last week has further weakened its authority in governance.

It is yet another indication, nevertheless, of the Leung administration, acting apparently in line with the thinking of the leadership in Beijing, is determined to disqualify Sixtus Baggio Leung Chung-hang and Yau Wai-ching from being lawmakers at all cost.

At the centre of the prevailing turbulence in Legco was a decision by the Legco President to allow five legislators-elect to take another oath last week. Of the five, three had been declared invalid by Legco secretary-general in their first attempt early this month. After reviewing the relevant video footage, Leung had ruled another two must have a “take-two”.

Leung’s decision prompted the Chief Executive to take him to court in an eleventh-hour judicial review of the President’s ruling plus an injunction to stop the swear-in ceremony. A High Court judge found there was a case of judicial view and fixed a hearing in early November, but gave green light to the swear-in.

With the attempt to block the pair of the Youngsipiration failed, the pro-establishment camp has come to the rescue. By walking out en masse last Wednesday, they succeeded in calling off the meeting altogether with three lawmakers, including Leung Chung-hang and Yau failing to complete their swearing-in.

Yesterday, Mrs Lam argued the pro-establishment’s walkout was different from previous walk-out incidents because the members “were in one heart.” He declined to comment on whether those members have acted in an appropriate way.

Head of the New People’s Party Regina Ip Lau Suk-yee has claimed their walk-out has strong public support. She argued cancellation of meetings in the next few weeks caused no harm as the Government has said they have no plan to table any bills to the legislature during the period.

Referring to the plan by pro-democracy lawmakers to move a motion over a probe into the Leung Chun-ying HK$50 million deal with Australian firm UGL, Mrs Ip said Hong Kong people have nothing to lose if the debate did not take place. She dismissed it as an empty talk.

It may be true that the Government has no immediate plan to put forward bills at Legco. That doesn’t mean, however, lawmakers can take a day-off by quitting if they found there is nothing meaningful on the agenda.

Furthermore, it is arguable that the fresh attempt to find out the whole truth of Leung’s alleged wrongdoings over his departure deal with UGL is meaningless.

Mrs Ip may genuinely believe the Chief Executive has already told the whole truth. The truth is that many people remain doubtful as some crucial questions are still unanswered. They include whether he has made any declaration to the Executive Council after he took office in July 2012, when his agreement with UGL was still effective.

Mrs Lam may seriously believe the fact pro-establishment lawmakers acted in unison could justify their walk-out.

That cannot be possibly what any responsible government that acts in the overall interest of the society would like to see.