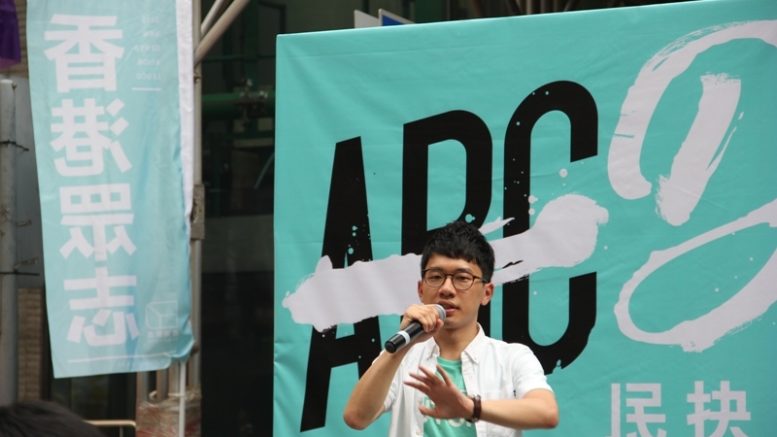 Demosisto chairman Nathan Law, who becomes the youngest legislator after being elected on September 4, pledges to Magistrate June Cheung he will continue to fight for justice.

Shortly after your judgment in July, I returned home and had dinner with my mother, asking her not to be worried – although I was held guilty in the morning. A few weeks later, I returned home again and enjoy a very warm dinner prepared by her. This time, I brought with her, 50,000 votes of support and care. These votes were a result of the growing concerns, over our autonomy and our liberty as more than 2.2 million citizens had cast ballots in this most critical election.

Today, I humbly write to you, not as a defendant who was held guilty, but as a student who strives to contribute to this city. To be very honest, I once had lost my faith towards the systems, and the values we believed in. During the Umbrella Movement, I witnessed countless cases of false arrest, arbitrary or selective prosecutions. When I reflect upon these scenarios, I can’t help feeling disappointed. Isn’t it the Hong Kong we love most? Isn’t it judicial independence that safeguards our city’s success, apart from freedom and economic prosperity? Isn’t it the checks and balances that make ordinary citizens and powerful officials humble?

I lost faith in the idea of the rule of law because justice was not seen in many cases. But during my trial, I observed fairness and the equality demonstrated, in every single detail of the judicial procedure. I realised that, there are guardians who faithfully safeguard our rule of law, without hesitation. Although I’m now a guilty man, I’m very grateful to the trust the court has given to us. The court accepted that our actions were not driven by personal interests, but out of our political vision. In the past two years, the younger activists were criticised for being radical or influenced by foreign powers, Yet we simply refused to become indifferent to social injustice. The judgment acknowledged selfless and non-violent civic actions and paved the way for a more tolerant attitude towards civil disobedience. It has also affirmed my belief to pursue this idea in the future.

I remembered, in the farewell speech of Justice Bokhary, he warned of the storm over the rule of law. “The voices disrespecting the city’s autonomy are growing louder and louder.” In the past four years, the challenges we faced were unprecedented, threatening the rule of law. Today, my honourable friend Eddie (Chu Hoi-dick) has even received imminent death threats because of his political views. But let us not forget the important message Justice Bokhary left to fellow Hong Kong citizens – His faith in the judges to safeguard judicial independence. And to defend this impartial cornerstone of the city, we need to take actions to prevent violence and arbitrary power corruption.

I’m about to serve the city in the Legislative Council and one of my duties is to monitor the government and enact laws. I promise you, I’ll uphold the values laid in the judgment to serve Hong Kong selflessly and to speak up against social injustice. I’ll take your advice by heart — to avoid acting recklessly and always to remind myself of the consequences I may have. When our paths cross again, hopefully not in court, I hope I can tell you in person, that Hong Kong has become a better place to live in — because we, in different positions, have worked very hard to safeguard our home, with kindness and, with integrity.

This is the speech given by Nathan Law Kwun-chung, chairman of the Demosisto. He is a legislator-elect representing Hong Kong Island geographical constituency, at RTHK’s Letter to Hong Kong on September 11. He wrote to Magistrate June Cheng Tin-ngan, who handled the case involved him and two student activists for storming into the Government Headquarters on September 28, 2014.