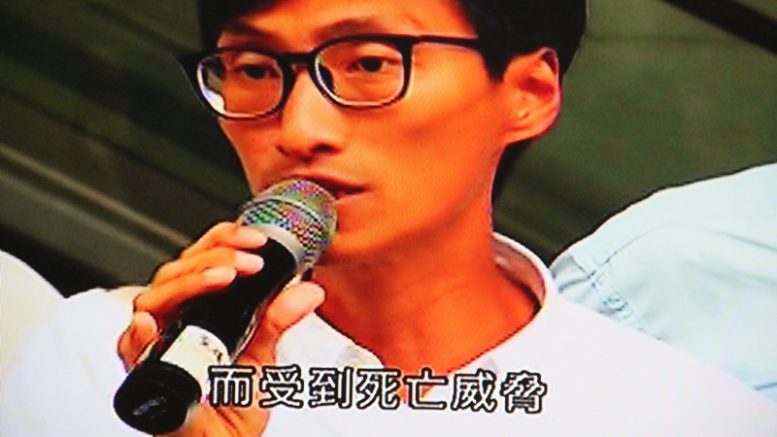 Eddie Chu Hoi-dick, the “king of votes” in the Sunday Legislative Council election, and Ken Chow Wing-kan, who pulled out from the race claiming fears about his family’s safety, dropped a political bombshell this week days after the controversial poll.

Accompanied by his lawyer and several newly-elected lawmakers including Nathan Law Kwun-chung, Chu reported to the police on Thursday, saying he has received “credible threats” against him and his family. Citing safety concern, he said he and his family were afraid to go back to their home at Pat Heung since Sunday.

He said he has written to Chief Executive Leung Chun-ying, Secretary for Security Lai Tung-kwok and Police Commissioner Lo Wai-chung to help ensure their safety.

Chu, a prominent activist over environment and land issue, won a seat in the New Territories West constituency with more than 84,000 votes. He did not give any further details about the alleged threats, saying only that they had “escalated quickly” since the polls.

Emerging this week after he went overseas before the Sunday election, Chow gave more details about why he decided to “suspend” his campaign last month. Chow of the Liberal Party claimed on Wednesday he was threatened by “three people from Beijing” who demanded he drop out of the NT West race to improve the chances of other pro-Beijing candidates.

On Thursday, he gave more details about the alleged threats, saying mainland officials based in Hong Kong had tried to persuade him to emulate another candidate in the Hong Kong Island geographical constituency in keeping his election campaign in a low-key manner. He did not name names. Chim Pui-chung, a former legislator, was almost invisible during the Hong Kong Island contest.

Although details of the two cases seem to be un-related, there are deepening fears in some quarters of the society that they may be the shape of things to come. The grim reality is that the shadow of political violence and intimidation is looming in the city’s political landscape.

This could not be more odd and disturbing as Hong Kong is widely seen as a safe city and that the interplay of politics is largely peaceful, civilised and abide by law and rules.

Compared with many places including democracies such as the United States and Japan, money politics has not been a serious concern in the society. The credit goes to the city’s long-established and well-tested institutions and systems, including the Independent Commission Against Corruption, the Police, the judiciary, the media and a peace-loving and civic-minded people.

The Eddie Chu case and Ken Chow case have stoked fears that two forces were causing damages to the fundamental systems and values of the city.

There are reasons to believe Chu faces with death threat because of his avowed pledge of exposing the collusions between the government, business, rural and triad forces in the countryside after he won the election on Sunday.

The rural areas have been notorious for its complexities in land ownership partly due to the small house policy and the related land issue and loopholes and abuses in land use. Chu, who champions environment protection and the preservation of countryside, could be seen as a threat to the vested interests, in particular those who control land in the area.

The Ken Chow case seems to have a connection with the increasing intervention of the mainland authorities in the city’s two sets of elections at the Legislative and District Councils respectively.

Of them, one worrying development is that the central government’s Liaison Office was said to have given full backing to a handful of candidates they identified for focused grooming for them to sit on the legislature.

They include Junius Ho Kwan-yiu in NT West and Eunice Yung in NT East.

Ho has denied any connection with the plight of Chow and claims that he has the backing of the Liaison Office.

It remains unclear whether Chow’s claims are authentic. But it is widely understood that the mainland authorities had pulled out all stops to boost the pro-establishment force to try to reduce the total number of seats for the pan-democrats to less than one third of the total.

If confirmed to be true, the use of bribes and threat by mainland officials to try to influence the election constitutes a violation of Hong Kong law and the Basic Law.

Taken together, the two cases have deepened fears about the rise of political violence and the decline of the city’s strength in institutions, systems and political culture.