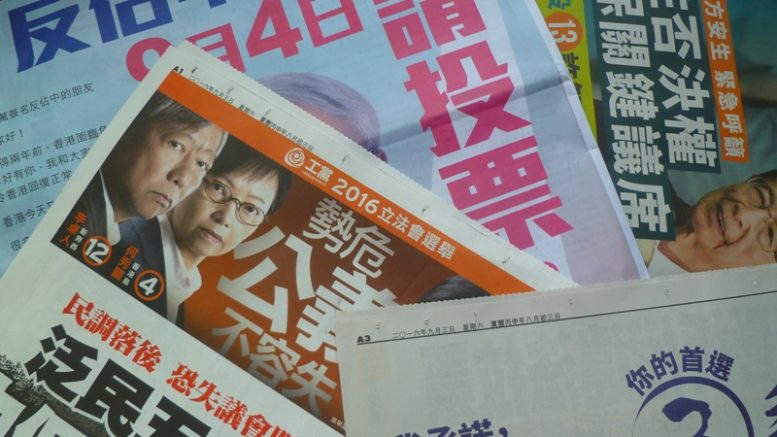 Eleventh-hour pleas for votes for candidates in the Legislative Council election scheduled for Sunday have flooded newspapers on Saturday.

Today is the 2016 Legislative Council election day. More than 3.7 million voters can cast their votes for members of the next legislature. We will know who are the winners and losers when every vote is counted and results are announced tomorrow. The Legco election is an opportunity every four years for voters like us to have our say on who should represent us in the legislature. Given the fact we still do not have a full democracy with all Legco seats being returned by “one person, one vote,” we should look forward to casting our votes with hope and excitement. But perhaps like you and many fellow Hongkongers, I have to admit it is easier to get fun, pleasant surprises and something positive from playing Pokemon Go than from watching the election game.

The past few months of election campaign have been flooded with negatives. Watching the election forum held by TV and radio stations is a big test of your patience and tolerance. The quality of debate on political and policy issues was mostly lacklustre, if not poor. Worse, a lot of candidates were more interested in beating their rivals by the loudness of their voices than the quality of their argument. In terms of quantity, there are quite a lot of names on the ballot papers for you to choose. But when it comes to quality, voters can hardly feel excited because of the lack of real choices available. They can be pardoned for feeling a lack of incentive in coming out to vote. 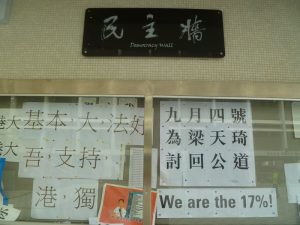 Posters at HKU campus calling on students to give justice to Edward Leung Tin-kei of Hong Kong Indigenous. Leung is one of the six aspirants being disqualified from running for the Legco election.

Equally, if not even more, damaging is that more questions have now been raised about whether election in Hong Kong is fair, open and clean as it has always been since it was introduced more than 30 years ago. This year’s Legco election has a bad start two days before the nomination period kicked off. The Electoral Affairs Commission dictated a new requirement for people to sign a so-called “anti-independence” confirmation note together with their nomination paper. Six people including Edward Leung Tin-kei of the Hong Kong Indigenous were disqualified from standing for the election. They were alleged of promoting independence, which were deemed as unconstitutional by the mainland and Hong Kong governments.

The unprecedented denial of the right of people to stand for election has sparked fears about political vetting of candidates by returning officers, who are senior-ranking civil servants. Worse, the apparent double standard of returning officers in their assessment of the deeds and words of candidates on their pro-independence stance has raised serious questions about their even-handedness, or the lack of which, in overseeing election.

Hong Kong has not yet have a full democracy. But elections in Hong Kong have won praise as being fair, open and clean. This can be attributed to a long-established system that features an independent election watchdog, namely the Electoral Affairs Commission, a fleet of professional and political neutral civil servants and a set of clear and fair election rules on matters such as election expenses and voter registration. In addition to a rule of law system and independent judiciary, an independent media has played an important part in monitoring the wrongdoings in the electoral process.

Apart from the “confirmation note” controversy, there are more cases of irregularities and controversies relating to this year’s Legco election that have raised doubts about its fairness and honesty.

Take publicity as an example. Months before the beginning of nomination period, major political parties and groups have spent millions of dollars on the publicity of their key figures in huge advertisements in eye-catching spaces including entrances of tunnels and outer walls of buildings. With almost no exception, those faces were candidates in the ongoing election. But since they have not yet declared their candidacy when the display ads were placed, they are not required to submit the relevant spending in their election expenses. Put plainly, those with more money have been able to jump-start their de facto campaign bypassing the restriction over election expenses before it formally began.

Meanwhile, a string of claims and counter-claims about alleged vote-rigging and bribery has deepened doubts about whether our election is still fair and clean and that the results are credible. Reports that some civil service unions have become more explicit in calling on members to vote for candidates who are more supportive of the Government has raised questions about whether that is in line with principle of political neutrality. 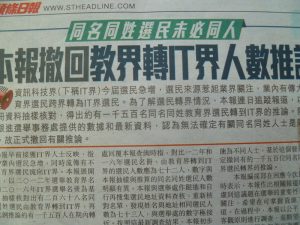 Headline Daily, a paper under Sing Tao News Group, withdrew a report that claimed the Professional Teachers’ Union has called on its members to switch to IT from education in functional constituency vote.

In New Territories West geographical constituency, a candidate decided to suspend his election campaign, claiming alleged threats. He claimed he was offered millions of dollars if he quit the race. He added later threats came from powerful force and hinted that the mainland authorities were behind it. There are also a lot of press reports about voters being offered gifts such as moon cakes plus a note of reminder of who they should vote for. In the IT functional constituency, a surge of registered voters has fuelled claims that the so-called “vote-planting” has become rampant. The Professional Teachers Union was accused by a Chinese-language newspaper for having called on their members to switch their choice of vote in functional constituency election from education to IT. The newspaper later withdrew their report after the Electoral Affairs Commission published the relevant figures that proved the claim was unfounded. The same newspaper has also published several reports about alleged sex-related scandals of some pro-democracy candidates.

On Thursday, news agency FactWire revealed ballot papers for the Sunday election were being stored in homes of polling station officers. The report gave rise to concerns about the credibility of the election.

Giving up voting not an option

Like any election, there will be winners and losers when results are announced. But candidates aside, the stakes for the Government, the election watchdog and the media are also high. They will be losers if the way they handle the election and their election coverage raise doubts about their independence, impartiality and credibility.

Everyone in Hong Kong will be losers if fair, clean and open election becomes history. When the dust of election settles, serious efforts must be made to fix the irregularities and clear the ambiguities in the electoral arrangements. They include the role of returning officers, voter registration and security of ballot papers.

Much has been said about the negatives. But giving up the right to vote is not an option. Let’s come out and vote before 10.30 pm tonight.

This is the full text of Chris Yeung’s Letter to Hong Kong broadcast on RTHK 3 on September 4.