As Hong Kong voters prepare to go to the polls in four days’ time the stakes have arguably never been higher. In the four years since the last Legislative Council elections our way of life, supposedly protected under the mantra of ‘one country, two systems’ has faced unprecedented challenges in the form of a systematic undermining of our core values and freedoms.

I hardly need rehearse to this audience the force of the assault on freedom of the press:

Not surprisingly Hong Kong’s rating in the World Press Freedom Index, published annually by Reporters Without Borders, has fallen steadily from number 18 in 2002 to 69 in 2016.

The autonomy of our oldest and most prestigious academic institution: the University of Hong Kong is under threat, with grave implications for academic freedom in all our universities. In response to the emergence of a local pro-independence movement, our Chief Executive has pronounced that freedoms of thought and expression do not apply in our schools; teachers who encourage or even just permit students to express an opinion on the topic have been told they run the risk of being de-registered and losing their jobs.

Not so long ago, it would have been unthinkable that our head of government would actually tell us what we and our children are allowed to talk about. It would have been unthinkable for the operations of our Police Force, ICAC and even the Department of Justice to become so blatantly politicised. These institutions are the bastions of our civil liberties and precious equality before the law. The really scary thing is that these developments are now coming so thick and fast, they no longer even seem to cause surprise.

If, as a community, we start to regard as normal downright dishonesty and lack of accountability on the part of government officials, an increasingly shameless contempt for values that we used to hold sacred, then we are in real danger. We must not become accustomed to a new normal; we must not lose our sense of outrage at the progressive erosion of the rights and freedoms guaranteed us under the Basic Law and the International Convention on Civil and Political Rights that applies to Hong Kong.

I used to believe in the maxim that people get the government they deserve, but no longer. Hong Kong people certainly deserve better than the current quality of governance they are receiving. The problem is that, in the absence of full universal suffrage and the ability to vote out officials who are incompetent, or abuse their powers, there are very few direct actions we can take to bring about change. 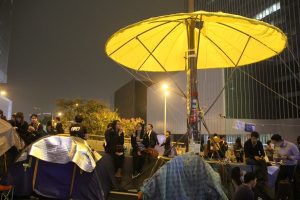 This feeling of powerlessness is at the root of the frustration that drove tens of thousands of our young people to occupy the streets for 79 days in 2014 and is now fuelling the localist and pro-independence movements. The more the Hong Kong and Central Governments try to stamp on what are very legitimate grievances, the more these groups will proliferate, gain momentum and, sadly, threaten more extreme measures to achieve their goals.

In the midst of this turmoil we badly need the incoming LegCo to respond to the mood of the community and generate some hope that the downward spiral in the quality of our governance can be reversed. Things have not got off to a good start. As Philip Bowring observed in his article of 20 August in the Asia Sentinel:

“… instead of looking to a future of a more democratic system, citizens are witnessing strong-arm tactics to limit participation.”

The barring of certain individuals from standing for election has very serious implications as, on the face of it, it constitutes a breach of Article 26 of the Basic Law which states:

“Permanent residents of the HKSAR shall have the right to vote and the right to stand for election in accordance with law.”

The law in question is the Legislative Council Ordinance which, in section 40, specifies the requirements a potential candidate must fulfil in order to qualify for nomination. These include, among other things, that the nomination form must be accompanied by a declaration form, signed by the candidate, to the effect that he or she will uphold the Basic Law and pledge allegiance to the Hong Kong Special Administrative Region.

The legal basis for imposing an additional requirement to submit a supplementary form, confirming specific understandings as to Hong Kong’s status as an inalienable part of China, is dubious at best and likely to be the subject of legal challenge. The fact that some who refused to sign the supplementary confirmation form were still allowed to go forward to stand for election, while others were not, suggests the entire process has been arbitrary and politically biased. 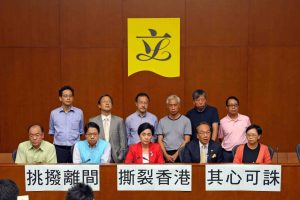 Not only is it unclear whether the Government had the legal authority to impose such a further requirement, without amendment to the LegCo Ordinance, the decision to make Returning Officers responsible for deciding on the eligibility of individual candidates was both improper and grossly unfair. Returning Officers are civil servants; their job is to administer the law not make it up as they go along. Specifically, it is not their job, nor are they legally empowered to exercise subjective judgement as to the bona fides of individual candidates; this is an inherent part of the electoral process for the voters and the courts to decide.

Despite the exclusion of six potential nominees, voters will still face a potentially bewildering choice of candidates. No fewer than 22 lists are competing for just 9 seats in the New Territories (East) constituency, 20 lists for 9 seats in NT(West), 12 for 5 seats in Kowloon (East) and 15 each for the 6 seats in Hong Kong Island and 6 in Kowloon (West). There are 9 lists with a total of 21 candidates for the 5 so-called super seats that are elected on a territory-wide basis by those not eligible to vote in any other functional constituency.

From one perspective we should welcome this enthusiasm to participate in what is still a very flawed electoral system, particularly among an upcoming generation of young candidates. From another perspective, however, the emergence of so many new – often very small – parties and independent candidates risks upsetting the delicate balance of representation in the Legislative Council.

It is crucial that the pro-democracy camp in the Council maintains its veto power, by collectively securing at least one-third of seats. Without this, the pro-government lobby is in a position to force through unwelcome constitutional change – such as last year’s Government package of proposals on the election of the Chief Executive – and introduce self-serving amendments to LegCo Standing Orders.

The overall outcome of the coming elections is hard to call:

Going forward, we must find a pathway to a more mature party political system that can aspire one day to work shoulder to shoulder with a democratically elected Chief Executive. To achieve this, we need to be more effective at grooming  political talent; we need to select the most able candidates to fill seats on government advisory committees – rather than establishment ‘yes’ men and women – and then encourage them to work their way up to higher political office.

We need greater focus on inclusiveness and the development of broadly-based policy platforms, capable of attracting support from a wide range of age groups and social sectors. We need less tub-thumping and more willingness by parties to work together on policies where there is a broad consensus on objectives.

Last year the Chairman of the Democratic Party, Emily Lau, proposed the setting up of a cross-party coalition on livelihood issues. Pro-government parties refused to cooperate, reinforcing the suspicion that the Government would prefer to continue to divide and rule, rather than promote a more cohesive and harmonious culture among lawmakers.

Intransigence of CE the cause of problems 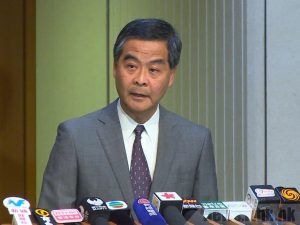 Most importantly we need to press for a re-opening of the debate on constitutional reform.

Functional constituencies fly in the face of the concept of fair and equal suffrage and, in the long term, can have no part to play in our political system. While we are stuck with them for at least another four years, Hong Kong 2020 will continue to work with young members in the growing number of FCs that are committed to reform by broadening their electorate, ousting the old guard leadership and ultimately paving the way to vote themselves out of existence.

Looking to the future, we must also press for a more productive and effective relationship between the Legislative and Executive Councils. Under the Basic Law, ExCo remains one of the fundamental cornerstones of our system of governance. In the past, it played a crucial role in ensuring the highest standards of policy formulation on the part of the civil service, tempered by the scrutiny of unofficial members of integrity and high standing in the community. Under the current Chief Executive, it has become a shadow of its former self, populated largely by individuals handpicked to toe the line handed down from the top. There are voices saying it has outlived its usefulness.

Exco has a role

My feeling is that we should aim to foster ExCo’s role in maintaining essential checks and balances between the powers of the Executive and the Legislature and safeguard its potential to evolve into a ‘cabinet’ that advises future democratically elected CEs. In times past the Office of Members of the Executive and Legislative Councils (Omelco) helped to promote closer relationships between the non-official members of the two Councils. It was abolished in 1985.

ExCo members should consider themselves every bit as accountable to the community as other members of the Executive, but these days you hardly ever see an ExCo member in front of the cameras defending the Government’s policy decisions. Arrangements should be put in place for them to meet regularly with LegCo representatives to solicit and listen to views on important policy issues.   In this way it may be possible to avoid the sort of deadlock that has plagued LegCo proceedings on controversial issues and hopefully lead to greater mutual understanding of the role and responsibilities of the two Councils.

As someone who has spent many hours sitting in LegCo meetings, both as an official and elected member, I know just how hard most members work. It frustrates me that the workings of the Council get so much bad press. The focus always seems to be on the filibustering and quorum calls, while hardly any coverage is given to the fundamentally good work that goes on, day-in and day- out, scrutinising bills, monitoring public expenditure and holding the Government’s policy-makers to account.

Despite the filibusters, lawmakers approved 83 of the 89 government bills presented to them during the last session and posed nearly 6,000 oral and written questions to Ministers. I think a bit more appreciation of the diligence with which many LegCo members fulfil their duties is in order, even if we can’t always respect the behaviour and tactics of some.

“Human progress is neither automatic nor inevitable… Every step towards the goal of justice requires sacrifice, suffering, and struggle; the tireless exertions and passionate concern of dedicated individuals.”

We still have a long road to travel to achieve the governance we deserve; new and unexpected threats to our core values and lifestyle have suddenly appeared. We are learning the hard lesson that, no matter how strongly the institutions of government are structured, how seemingly robust the checks and balances, all systems are only as good as the people administering them.

For the time being we must do what we can within the constraints we face. I urge all of you who can, to go out and vote this Sunday and ensure that the incoming Legislative Council contains as many men and women as possible who are of high moral principle, who embrace the values and freedoms that we cherish and who, above all, are prepared to stand up and defend them.

Anson Chan Fang On-sang is former chief secretary of the Government. This is her speech with slight edits given at the Foreign Correspondents Club on August 30.