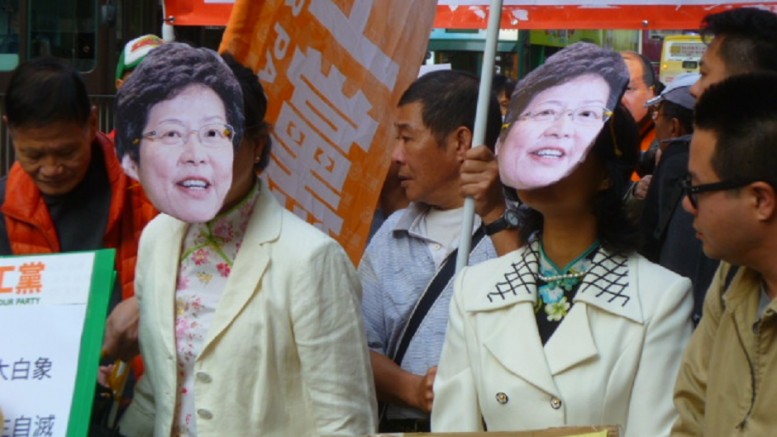 Chief Secretary Carrie Lam is ridiculed by protesters for failing to meet their demands for universal retirement protection.

In a bid to quash speculation about her next move after her present term of office ends in July next year, Carrie Lam Cheng Yuet-ngor told reporters last week her days were numbered. She meant what she said. In an interview with several Chinese newspapers, she said there were, to be exact, “17 months and 10 days” left in her current post of Chief Secretary. She ruled out any possibility of her serving for another five-year term in any capacity. Her message is clear: first, she will not accept any invitation to be the Number Two in the next administration; secondly, she will not run for the Number One post.

Following the announcement of Chief Executive Leung Chun-ying’s policy address on January 13, the jockeying for the post of the next chief executive will be heated up. Leung, who has said shortly after he won the 2012 chief executive race he hoped to seek re-election, has shied from talking about his plan since then – for tactical reason. It is naive to seriously believe, however, he is undecided. Since taking office, it is clear that he has never had a rethink about his dream for five more years. With his term entering its last one-third and no sign of him dropping his re-election plan, Leung’s opponents and doubters have and will double their effort to identify a strong contender to thwart Leung’s plan. Regardless of her wish, Mrs Lam is likely to be put on the list of potential candidates. From Leung’s perspective, Mrs Lam has become one of his strongest defenders and devoted salespersons of his policies. She is also a strong critic of the pan-democratic opposition. Bearing in mind the practical difficulty in finding a comparable replacement and the strategic importance of continuity, it looks sensible and natural for Leung to keep Mrs Lam on his wish list of second administration. Mrs Lam said any powerful lobbying by some people would not change her mind. Without naming names, it is plausible that she was targeting at the central government, Leung and her fans in the society.

In a self-confession, Mrs Lam said in the interview her state of mind has changed in the past six months. Now that her term has just about 17 months to go, she said she would like to “be true” to herself in speaking her mind. Mrs Lam hit headlines with a blitz of controversial remarks made in the past few months. At a Legislative Council session, she told legislators she has more guts and dare to speak boldly because she no longer aspired to seek higher positions in the government. Despite a decline in popularity, she said that was the last thing she cared, adding “I can fade out slowly.” By declaring she has no interest in the next chief executive race, Mrs Lam could occupy high moral ground when defending Leung’s policies and attacking the government-bashers, in particular the pan-democrats. It is no coincidence that she has intensified her criticism against the pan-democrat legislators in the recent months. On Saturday, she attacked the pan-democrats for having failed to attend meetings as they are obligated, arguing they are entitled to the benefits of pay and subsidies and honorarium. It is still unclear whether her tactic of tough-talk works in galvanising public support to put pressure on the pan-democrats. It looks certain her fighting mood and approach will further strain the government-democrats relations at a sensitive election year.

Thanks to her good public image and reputation as a capable, hardworking and committed public servant, Mrs Lam had stood high on popularity poll in recent years. But her popularity went south since she led the abortive political reform drive. A string of her controversial remarks has inflicted damage to her image and popularity. Although she may get considerable support from the pro-government segment of the society, those who are critical of the Leung administration tend to have turned negative towards her. Within the pro-establishment, it is widely understood that the business sector, in particular the big property developers, and pro-Beijing circle have reservation about her for different reasons. Developers have complained privately her hostility towards them. Some pro-Beijing figures have had doubts about her loyalty to the Chinese authorities. Meanwhile, the views of the civil service, one of the important stake-holders in the political game, towards Mrs Lam are probably mixed. Despite her Number Two position, it is interesting that there has been no serious, public appeals from some influential figures for her to run. Against that background, it will only be wise for her to rule herself out and wait patiently for a change of wind, if she wants to be back into the hot kitchen after 17 months.

Be the first to comment on "Carrie Lam battles with opposition in next 17 months, then pack and go"