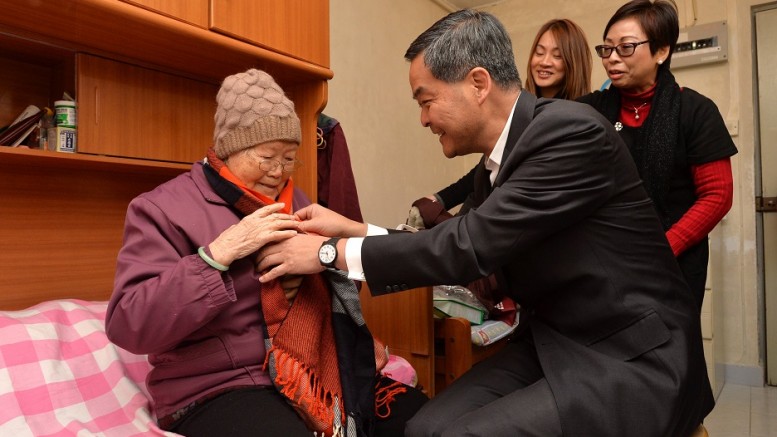 Amid cold weather, Chief Executive Leung Chun-ying seeks to warm the heart of an elderly woman, who lives alone in a Wah Fu public housing estate.

The last weekend are billed as the coldest days in Hong Kong in 59 years. As frost chasers flocked to the city’s high places for something cool and families gathered to beat the chilly weather with hotpot food, Chief Executive Leung Chun-ying paid unpublicised visits to try to warm and charm the hearts of elderly people and street-sleepers.

In an article posted on his blog late Monday afternoon, Leung revealed he has paid a visit to the home of a 90-year-old elderly woman, who lives alone in a public housing building in Wah Kwai Estate in Southern District in the morning. A picture posed on his official website shows a smiling Leung putting on a scarf for the woman, who was only identified as Chan.

Leung said he was thinking of his mother, who also lives on her own, when he visited Chan. He said her mother broke her leg when doing pre-Lunar New Year cleaning work, and was only aware of it after he was told by her neighbours.

In times of chilly weather, he urged children to take better care of their parents and that neighbours of elderly people should also keep a closer watch on them.

The visit to the home-alone elderly woman followed another unpublicised visit by Leung to a temporary shelter for people to take refuge in cold weather on Saturday night. He wrote on his Facebook some people have to turn to temporary shelters because they could not afford high rent and that many were waiting for public housing. Leung fired salvo against people who hindered the efforts of the government in looking for land for public housing.

He wrote: “I can’t help thinking why those people who oppose our public housing plan not coming down here tonight to talk to the street-sleepers?”

Although his blame on critics has given ammunition to some netizens for ridicule in social media, Leung has won “likes” from his friends on Facebook for caring about the plight of under-privileged people.

Also at the weekend, Leung attended an event organised by a pro-government education group. In his speech, he has pledged to put education high on his agenda in the next 17 months before his present term ends. He has specifically singled out issues including the ratio between students and teachers that he hopes to double his efforts for improvement.

The string of Leung’s weekend activities marks further signs of his priority and approach in his governance in the next 17 months, which have figured noticeably in his policy address delivered a fortnight ago.

In his policy speech, Leung went in length to give details of a host of initiatives aimed to improve the livelihood of people, including measures that are targeted at elderly people such as friendlier pedestrian crossing and public toilets. In a rebuke to criticism that those measures are petty, Chief Secretary Carrie Lam Cheng Yuet-ngor said the livelihood-improvement measures were formulated in a “meticulous and heart-warming” manner.

Taking together the Policy Address initiatives and his post-address “go-to-the-people” visits, it seems Leung has already shifted his focus on “heart-warming” initiatives in the lead-up to next year’s chief executive election.

In view of Leung’s high unpopularity, there are good reasons to cast serious doubts about the effectiveness of his charm offensive in rebuilding his tarnished image and salvaging his sagged popularity.

But just as his attempt to avoid stirring up fresh political bickering in his policy address, his fresh efforts to charm the homeless and the lonely elderly people are aimed to help keep controversy and criticism to the minimum, hoping to lessen the hostilities against him.

Set against the stormy weather since he took office, he could claim that is no small achievement when he delivers his work report at the end of his five-year reign and, most probably, campaigns for another five-year term.