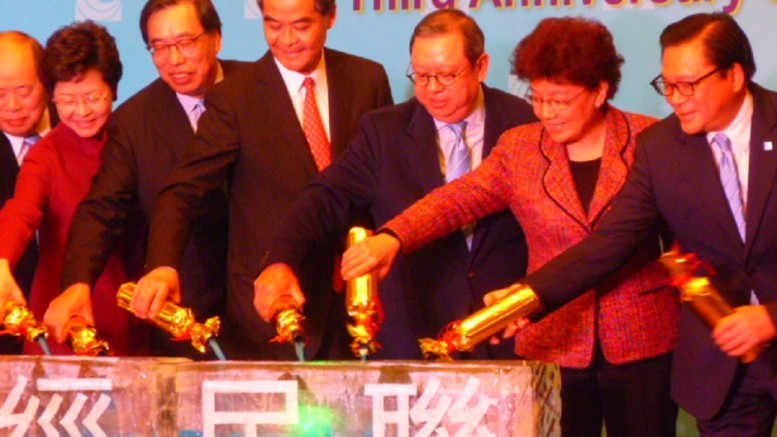 Chief Executive Leung Chun-ying and a senior Liaison Office official officiate an anniversary dinner of the Business and Professionals Alliance.

At Monday night, Chief Executive Leung Chun-ying headed a fleet of senior cabinet members to dine and sing with leaders of the Business and Professionals Alliance at the pro-business party’s third anniversary dinner in a five-star hotel. In a show of comradeship, Leung led his team to sing with Wong Ka-keung, a member of the now-disbanded rock band Beyond, pushing the star-studded dinner to a climax. Leung said at the dinner: “We will do everything we can to boost executive branch-legislature relationship.”

The executive-legislature ties failed the reality test two days later. On Wednesday, a government plan to push through a copyrights amendment bill, shelved four years ago, at the legislature hit a snag even before the scrutiny process began. The weekly sitting was forced to be adjourned for a lack of quorum. Since the sitting began at 11 am, President Tsang Yok-sing has ordered quorum bells be rung three times upon request by pan-democratic lawmakers.

A sombre-looking Tsang said he would not comment on the lawmakers’ political moves but said it would be their duties to attend meetings.

The absentees included five of the seven BPA lawmakers, including chairman Jeffrey Lam Kin-fung. Four of the five Liberal Party legislators were also nowhere to be seen at the chamber.

Commerce and economic development minister Greg So Kam-leung appears to be right when he said only a few radical lawmakers were eagerly keen to play filibustering in the resumption of debate on the bill.

But the adjournment showed even the loyalist lawmakers did not really care about giving a helping hand to the government in countering the radicals’ attempt by showing up when needed.

People Power lawmaker Albert Chan Wai-yip has made no secret his game plan before the sitting. He told reporters he hoped to drag the bill until Lunar New Year next year, and one way to do so was to adjourn the meeting at least twice.

Next week’s Wednesday sitting will start with the unfinished items on yesterday’s session.

Although the government holds enough votes for the passage of the controversial bill, it remains uncertain whether the long-awaited bill will become law before the current legislative year, the last of the present term, ends in July.

The mainstream pan-democrats said they would not join the filibustering, but have vowed to fight to the last minute for further amendments to the bill, which they maintain would give greater protection to freedom of speech.

The government stood firm and rejected any amendments made by the opposition pan-democratic camp.

Wednesday’s adjournment show, the latest but no doubt not the last of its kind, makes a mockery of Leung’s move to create an atmosphere of team-ship and harmony at the BPA dinner on Monday.

Troubled by increasingly adversarial ties with the pan-democrats and a half-hearted and fragile pro-government camp, the Leung administration is faced with enormous difficulty in pushing forward its policy programme.

There are no signs, however, Leung is in the mood of a ceasefire and a change towards pragmatism. Cases are abound. He has publicly called on voters to “vote them (radical legislators) out” when asked how he would counter filibustering. On the eve of the resumption of copyrights amendment bill debate, Leung has said it would be futile for opponents to block it by playing delaying tactic.

It is open secret that Leung and his allies have held out hope governance difficulties could be easier to be tackled if the fleet of pan-democrats in the 2016 legislature hold less than one-third of the total seats.

Despite the lacklustre performance of the pro-government camp in the November 22 district council election, Leung appears to remain confident he can accomplish the task of downsizing the pan-democratic camp to an insignificant minority. And with that, the executive-legislature relations will be cordial and friendly as shown at the BPA party.

Will DAB legislator Christopher Chung Shu-kan ask Leung the same question he put to an ex-MTRC chief executive officer at a Legco meeting: “are you dreaming on your office?”