A group of 47 democrats are facing charges of subversion.

Flashed back to the midnight of June 30, 1997, a group of democratic lawmakers stood at the balcony of the former Legislative Council, now home of the Court of Final Appeal, vowing “we will be back.”

Among them were the founding chairman of the Democratic Party, Martin Lee Chu-ming, and James To Kun-sun, the then youngest legislator and the most senior legislator before he resigned to protest against Beijing’s decision to oust four pro-democracy legislators last year.

They were forced to stand down from the legislature following the breakdown of Sino-British talks on the transition of the legislature due to a sharp discord over electoral reforms spearheaded by last governor Chris Patten.

One year later, they did return to the Legislative Council – and with a bang. The Democratic Party became the biggest political party in Legco, having grabbed 13 of the total 20 geographical constituency seats.

Two decades on, the Democrats, though still seen as the pro-democratic flagship, and all other like-minded groups in the pro-democracy camp, are fighting for their survival.

Lee, 83, Hong Kong’s most senior barrister, will have to defend himself against charges of participating in an “unauthorised assembly”. To was among a group of over 50 democrats arrested for organising and joining a Legco primary election in July last year. 47 were formally charged with subversion last week. To is still being investigated.

Lo Kin-hei, the newly-elected chairman of the Democrats, said they are still undecided on whether to participate in elections.

Lo’s predecessor, Wu Chi-wai, is among the 47 now being held in custody. Among them are a list of young rising stars in the pro-democracy camp, who shot to fame during the 2019 social movement. They face the grim reality of long years of imprisonment if convicted.

Even if they survive from the draconian law, they look certain to be blocked from running for elections under a set of changes to the electoral system scheduled to be adopted at the end of an annual plenum of the Chinese National People’s Congress (NPC) in Beijing.

Details of the electoral changes are still unclear by Monday night. According to media reports, the number of geographical constituency seats will be reduced from 30 to 20. The number of Election Committee members will be increased from 1,200 to 1,500. Currently, the 1,200-member body is formed by four sectors, with 300 for each.

The extra 300 members will become the fifth sector, with members coming from local deputies to NPC and Chinese People’s Political Consultative Conference and “patriotic bodies” representing women, youth and overseas Chinese and the like.

In addition to the role of electing the chief executive, the Election Committee will be given the extra role of electing a substantial number of legislators, or 30 to 40, according to various media reports. Importantly, the expanded body will be vested with the power to nominate candidates standing for direct polls.

The new nominating mechanism could become a tool to block anyone from standing for elections.

The dream of political aspirants seeking to win the mandate of the people through democratic elections to sit in the legislature has already been shattered following the mass prosecution against the democrats. The overhaul of the electoral system will set a blockade on the path of the city’s democratic development.

With the power of the national security law in suppressing political dissent widely felt, the imminent overhaul of the electoral system will pose a serious question to any democrats.

Put simply, it is a question of “to run or not to run.” Does it still make sense for the democrats to fight from within the Legco, knowing that they may not even be able to get one-third of seats while doing so could justify the unfair election system? But if they give up the electoral battle, are they prepared to resort to street politics? 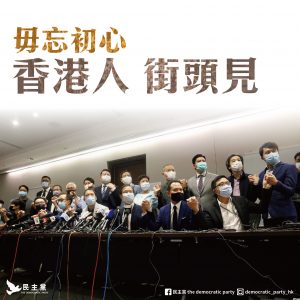 Will democrats have to return to the streets to fight for democracy?

Loyalists have sought to convince the democrats they still have a future in politics as long as they reposition themselves as “loyal opposition,” presumably meaning they do not cross the “red lines”.

But judging from the list of democrats being prosecuted and arrested since last year, almost anyone carrying the flag of democracy could be deemed as “not being loyal.”

Noting the democrats could no longer function as an effective opposition, former head of the now-disbanded Central Policy Unit, Shiu Sin-por, has warned of an “overkill” in the electoral revamp. He did not elaborate.

Just imagine a city run by “loyal patriots” with dissenting voices sideline, if not gone, being replaced by a dreadful sound of silence.

This article was first published on Apple Daily on March 10.