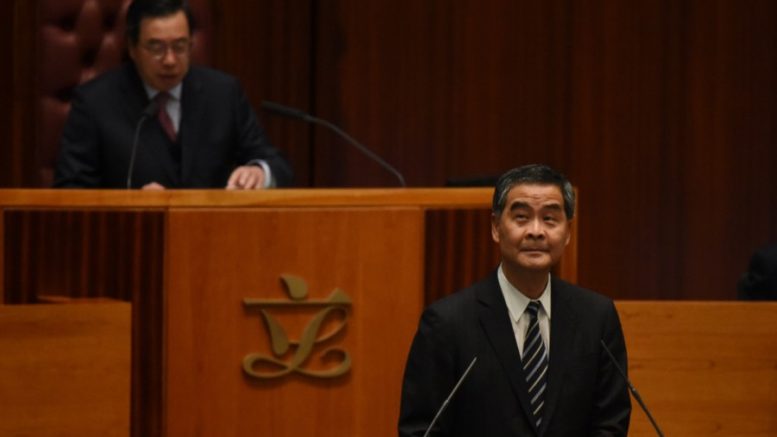 Chief Executive Leung Chun-ying defends his deal with UGL... at all cost.

First came to light in a report published in an Australian newspaper in October 2014, the controversy over Chief Executive Leung Chun-ying’s receipt of HK$50 million from Australian firm UGL has refused to go away. It is back to headline news laden with more surprises and absurdities.

Thanks to an alleged attempt by Leung to meddle with a Legco select committee’s probe, it was given new life, re-energizing the anti-Leung sentiments and bringing trouble, or embarrassment, to say the least, to the Beijing leadership.

It came just about two months after the ruling Communist Party installed Leung to the rank of state leader, in his capacity as vice-chairman of the Chinese People’s Political Consultative Conference, China’s united front body, at its annual plenum in March.

Dubbed by some media as “Holden-gate,” the latest episode of the UGL serial drama erupted after it was revealed that an amended paper about the scope of the Legco probe submitted by DAB’s Holden Chow Ho-ding was indeed penned by Leung. Leung’s changes made to the document surfaced after Legco secretariat staff found the previous versions kept in the document.

Leung confirmed he personally made the changes, but insisted there was nothing wrong and that he, as the person being probed, should have the right to express his views. He did not directly comment on whether it was right for him to talk to Chow, who was vice-chairman of the committee.

Chow had originally insisted he had done nothing seriously wrong, but later admitted shortcomings and quit the Legco select committee.

Leung sits on the Legco select committee and is being sued by Leung Chun-ying for having made libelous statements on Leung relating to the UGL case.

In a lengthy open letter published on his official website on Sunday, Leung Chun-ying said Kenneth Leung’s role in the committee investigation was “a concrete case of poor-quality Hong Kong politics.” He alleged the pan-democrats of manipulating the judicial and law enforcement institutions to attack government officials.

Flanked by his pan-democrat Legco colleagues, Kenneth Leung refused to step down, but said he would stop making public comment on the UGL case. 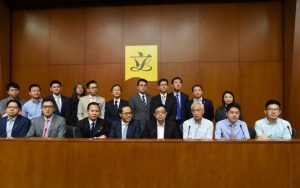 Pan-democrat legislators stand united to defend Kenneth Leung, who faces calls by Chief Executive Leung Chun-ying for him to quit a Legco probe into the UGL case.

Just about three hours after he and the pan-democrats spoke, Leung Chun-ying issued another statement, blasting Kenneth Leung for failing to answer his questions raised in the Sunday statement.

Although Leung is already been known for his belligerent approach in the game of politics, his combative tactic in seeking to silence doubters and critics has ironically served to deepen suspicion among his opponents and ordinary people.

The more he sought to dismiss the UGL case as a non-starter the more doubters believe there is something wrong in it. And the more he tried to influence the probe by the legislators the deeper the suspicion among the people about his deal with UGL.

In view of the sea of distrust, verging on hostilities, towards him in the society, it is a case of political naivety for him to try to fight for his innocence on his own. Like it or not, he has already slipped into a political swamp. The more he struggles to get out of it, the deeper he is mired in the mud.

He needs a panel of independent figures with high credibility and public trust to help dispel doubts about his deal through a thorough investigation.

In a note to Leung on his Facebook, University of Hong Kong law professor Eric Cheung Tat-ming has proposed a similar idea.

“If Mr Leung thinks certain members of the Legco committee have had preconceived views and stance and therefore would not able to conduct the probe fairly, are you willing to set up an independent commission chaired by retired for serving judge in accordance with the law to conduct a fair inquiry to clear people’s doubts?”

In his 13-point attack against Kenneth Leung on Sunday, the Chief Executive has lambasted the legislator’s allegation against him as a “concrete case of poor-quality politics” in Hong Kong.

There are far more things he could and should do to showcase the play of decent politics in putting the UGL row to an end than to throw mud onto his opponents.

Be the first to comment on "Thanks to C Y Leung, UGL saga goes on and on"