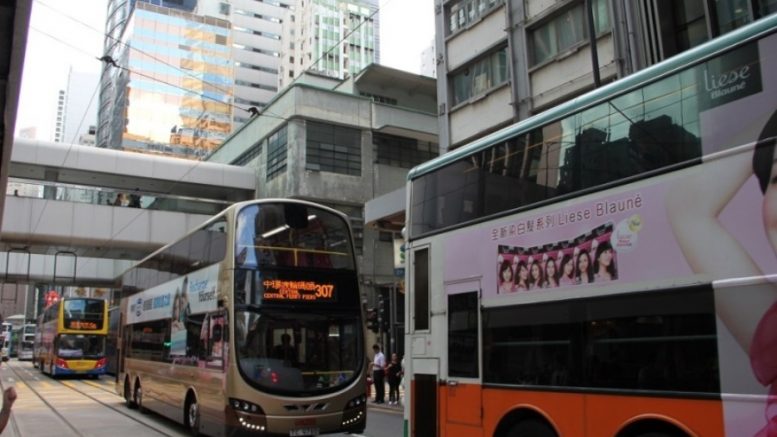 Civic Exchange, an independent public policy think-tank, welcomed the fact that walkability – one of our main areas of focus – was addressed directly and specifically in the Chief Executive’s 2017 Policy Address. However, we also expressed concern with the Chief Executive’s emphasis on land development and rezoning.

We noted that while the Policy Address promotes greater cooperation with Mainland China and makes heavy reference to China’s 13th Five Year Plan, it fails to give specifics on how Hong Kong will play a part as China aggressively pushes forward on renewable energy, green economy and green finance.

Civic Exchange calls on the government to put “people first” in its urban planning.

“The government must put ordinary people, pedestrians, liveability and sustainability issues at the centre of the ambitious urban plan outlined in the Policy Address, “ said Maura Wong, Civic Exchange’s CEO.

Wong cautioned that, as the government embarks on land development projects and big infrastructure projects, it must not fall back on outdated, hardware- and vehicle-centred ways of thinking about urban planning and transportation.

“This Policy Address reflects an infrastructure-led, big developmental planning driven approach to rethink Hong Kong’s long term position especially in view of its connection with China,” Wong said. “Developing Hong Kong is important, whether it’s building enough housing for the population, or creating greater transportation and business links. However, Civic Exchange believes development today must be pursued with new lenses and a new way of envisioning how a city is built and organized.” Below are our specific views on:

We welcome the emphasis on walkability, which was a focal point of our work in 2016, when we held Asia’s first Walk21 Conference. We welcome the acknowledgement in the Policy Address that walking is an “integral part of Hong Kong as a sustainable city”. We are also happy to hear that the Government will 1) encourage people to walk more and rely less on motorised transport; 2) foster a “pedestrian-friendly environment”; and (3) promote “Walk in HK”.

At the launch of our WALKABILITY initiative in December, we called on the Transport Department to consider walking as a form of transport. So we were heartened that the Transport and Housing Bureau is tasked to implement new measures along four themes – making walkability smart, connected, enjoyable and safe.  The THB and Transport Department can play a key role in making walkability a reality in Hong Kong. We would like to know which two areas will be selected for the pilot study to test innovative measures for a comfortable walking environment and would welcome the opportunity to work the government on this exercise. We welcome the ideas mentioned in the Policy Address: covering pedestrian walkways and building hillside escalators. We believe these are pragmatic, concrete measures that Hong Kong can seek to make improvements on, as they contribute to making Hong Kong a more walkable city. At the same time, we urge the government to continue to experiment with bolder measures like the use of pedestrianisation, even in established urban areas such as Des Voeux Road Central.

The two waterfronts along Victoria Harbour are an iconic part of Hong Kong, as well as an integral component of walkability and public open space. The Policy Address stated that it was “premature” to establish a statutory Harbourfront Authority, but we disagree. While the government is already working with the Harbourfront Commission, an advisory body, it is time for a body to be created with actual authority over harbourfront development.

The revitalization of East Kowloon was to date lauded as successful because it had a dedicated unit in charge, with the authority and focus to tackle the challenges of regional revitalisation that cross departmental and bureaux boundaries. Our waterfront deserves the same.

We welcome the Chief Executive’s plans for cycling networks that could potentially link to open spaces, popular attractions and transportation hubs.

We also look forward to the Public Transport Strategic Study later this year, and recommend that the government more aggressively push electric-powered buses and make sustainable mobility its policy focus.

A significant portion of the Policy Address was dedicated to increasing land supply for housing from sources including new development areas (NDAs) like Kwu Tung North, Fanling North, Tung Chung New Town Extension, Hung Shui Kiu, Yuen Long South, etc. It is very important that the government be consistent with what it is promoting in this Policy Address and that the four themes of walkability – being smart, connected, enjoyable and safe – be integrated as a part of urban planning in these areas, as well as established urban neighbourhoods.

The Policy Address mentioned the government will “increase the total area of…. country parks.” At the same time, it says “we should also consider allocating a small proportion of land on the periphery of country parks with relatively low ecological and public enjoyment value for purposes… such as public housing and …elderly homes.”

We question if these two statements are compatible and until the government offers more concrete details on how it plans to achieve both, advises caution in this area. Our latest report on public attitudes towards biodiversity, published in January, shows that 67% of Hong Kong residents do not agree with opening up country parks to development. Among residents who showed “awareness and concern” about biodiversity, that level rises to 85%.

The Chief Executive mentioned the Government’s first Biodiversity Strategy and Action Plan (BSAP), released in December. One of the BSAP’s goal – to “mainstream” the topic – is in line with Civic Exchange’s recent findings that public awareness about biodiversity is “very low.” Our January report found that only 24% of the interviewees had heard of or knew what  “biodiversity” meant.

The Policy Address mentioned an agreement that Hong Kong signed with Mainland China in December to work together with the objective to better control marine vessels emissions in Pearl River Delta. This is something Civic Exchange has long advocated. From this point onward, Hong Kong would best pursue a regional collaborative approach on the topic of controlling marine vessel air pollution; and our government should be both collaborative and pro-active in this regard.  We also support the Chief Executive’s initiative to explore technology to improve the fuel efficiency of Hong Kong’s local ferries. We think the government should go beyond fuel efficiency and investigate alternative fuel types like LNG and electric power, for both local ferries and river vessels.

The smog blanketing Hong Kong has made headlines recently, so Civic Exchange was disappointed in the relatively short amount of time paid to this issue, as well as the lack of a detailed road map on how we can solve the problem. The Policy Address mentioned carbon intensity, but the government must also look at absolute carbon reduction. The Policy Address’s statement about “gradually” moving “most” energy from coal to cleaner sources needs to be backed by specifics on what Hong Kong’s fuel mix will be, with clear medium- and long-term targets.  The Policy Address mentioned a 65%-70% reduction in carbon intensity by 2030, compared to the old target of 50%-60% reduction in carbon intensity by 2020.  We do not know at this stage what Hong Kong is likely to attain by 2020 based on the existing trajectory.  Therefore, there is insufficient information to know whether the new target is an appropriately aggressive one that shows that Hong Kong is serious about climate change mitigation.

The policy address promotes major infrastructure projects, like the Hong Kong-Zhuhai-Macau Bridge (HZMB) and multiple new road links. Inevitably, these projects will lead to more vehicles coming into Hong Kong, which could lead to worsening road conditions and roadside air pollution. Many of these vehicles from Mainland China may have lower emissions standards than Hong Kong vehicles. While improving connectivity and competitiveness are important, those efforts must be supplemented by better road management and vehicular growth control. The authorities must be cautious that new infrastructure does not cause a host of peripheral issues like increased pollution, more traffic congestion and a worsening imbalance between cars and pedestrians in road use.

This is the views of the Civic Exchange, an independent think tank, on the Chief Executive’s 2017 Policy Address.