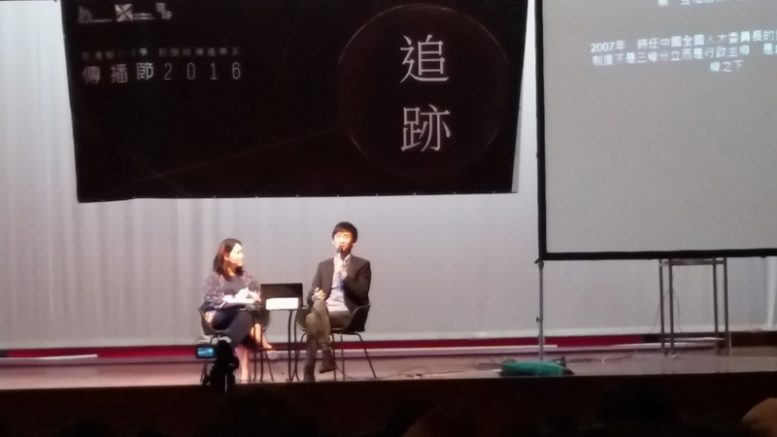 "I have no regret," says Youngspiration's Sixtus Leung Chun-hang at a Shue Yan University student assembly when asked about a High Court verdict on the disqualification of the seats of him and Yau Wai-ching.

If Youngspiration duo Sixtus Baggio Leung Chung-hang and Yau Wai-ching have been seen as political rising stars after their success in the September Legco election, their political stardom faded into darkness following a High Court ruling on Tuesday. Justice Thomas Au Hing-cheung ruled they lost their seats after they breached the oath ordinance in their oaths on October 12.

If they had aspired to promote the notion of “self-determination” of Hong Kong as a “nation” at the Legco, their mission failed before it officially started. But if their mission, as conspiracy theorists have touted, was to push the advocacy of a “Hong Kong independence” beyond the red line for Beijing to invoke its power to keep it at bay, it is a case of mission accomplished.

The two legislators-no-longer have been lambasted for having provoked the communist authorities needlessly and recklessly. Some argued the National People’s Congress Standing Committee was “forced” to interpret the Basic Law, its fifth time after 1997, to clarify the requirements of an oath of allegiance to the Hong Kong SAR.

Are they defenders of Hong Kong’s autonomy or sinners of democracy? Is it a case of mission accomplished or undone?

Those questions about who the Youngspiration pair are have intrigued a many in some quarters of the society, in particular among those who are supporters of the pan-democratic camp, now commonly known as non-establishment faction.

At a weekly assembly at the Shue Yan University on Tuesday, Leung was grilled on whether he was a “ghost”, which meant undercover, installed by the Chinese Communist Party in the pan-democratic camp to stir up troubles.

During a question-and-answer session, a student asked if he felt he has become “a sinner of democracy” for having victimised a bunch of other non-establishment lawmakers who faced legal challenge over their oaths in the wake of the NPC Basic Law interpretation over oath-taking.

In his response to claim that he was the communists’ “ghost,” Leung said he would be a “poor ghost” if he was paid by the mainland authorities to run. “Our declaration of election expenses will soon be available for public inspection. We have probably spent the least amount of money on the campaign.

“If we were the ‘ghosts,’ we should have done our best to stay at Legco. Our two votes can be sold at high price if a change of the Legco’s rules and procedures (to stop filibuster) is put to a vote.”

Responding to the student’s questioning that their oath-taking risk has back-fired and hindered the democratic movement, Leung said it was a case of “blame the victim.”

He said: “Some ridiculed as ‘primary-school chicks’. I would say we are the child who dares to say the Emperor is naked; he has no cloths on him.

“To be honest, do you really expect us to be a good boy sitting quietly at Legco in the next four years? We just do as what we are… I have no regret. I will only have if I have done something wrong,” said Leung.

Whether he is telling the truth is anybody’s guess. The reality is that he and Yau have been condemned by the Chinese and Hong Kong governments and the pro-establishment camp. A retired mainland official Chen Zuo’er has described them as “rats in the street.” His message is: just beat it.

The non-establishment camp, meanwhile, is largely unsympathetic. Some said they only have them to blame for their fatal mistakes and misjudgement, picking the wrong battle in oath-taking and digging into the landmine zone with no protective devices and preparation for an exit. And worse, they have irritated Beijing, putting everyone in a precarious situation under Chinese sovereignty.

Be it a plot or an ill-judged political gamble, the oath-taking of the Youngspiration pair has emerged as a Godsend gift for hardliners in Beijing and Hong Kong to tighten the room for political dissent in the city.

The advocacy of the vaguely-defined idea of “self-determination” has been branded as “hidden independence” by senior National People’s Congress, putting those advocates in a vulnerable position.

Under the NPC interpretation of oath-taking, those who are being branded as “advocates” for “self-determination” and “Hong Kong independence” may not even be eligible for contesting Legco election.

Seen from a longer perspective, Beijing’s toughened stance towards pro-independence activism in the city could be traced back to the State Council’s white paper on Hong Kong policy published in 2014, or at an earlier time back to the July 1 march in 2003. With or without the oath-taking saga, it can argued that a tougher approach of Beijing towards Hong Kong is the shape of things to come.

Be the first to comment on "Is mission of Leung, Yau done or ruined?"