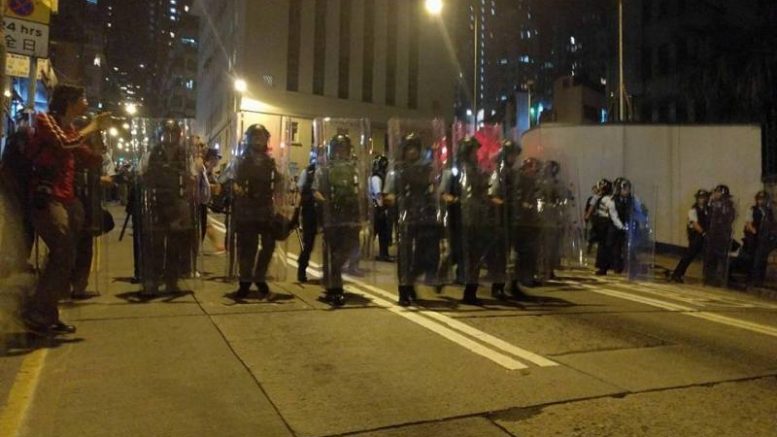 Anti-riot police armed with shield stop protesters from marching towards the Liaison Office on the eve of a NPC Standing Committee interpretation of the Basic Law.

When the National People’s Congress Standing Committee interpreted the Basic Law to overturn a Court of Final Appeal on a right of abode case in 1999, Ronny Tong Ka-wah, who chaired the Bar Association then, warned a “Damocles sword” was hanging over the city’s judiciary after the Government refused to ask Beijing not to do it again.

Since then, China’s top legislature exercised their power to interpret the city’s mini-constitution thrice under different situations. It did the fifth time on Monday. This time, the “sword of Damocles” was hanging over the heads of a bigger crowd. Anyone who advocate independence, self-determination or branded as “hidden pro-independence activists” could be in trouble.

If they, like Youngspiration legislators-elect Sixtus Baggio Leung Chung-hang and Yau Wai-ching, who will no longer to be, are aspired for the post of legislators, they are set to be eliminated at the nomination period under the NPCSC’s latest interpretation.

While interpreting the “original legislative intent” of Basic Law Article 106 that says those who hold office in the three power branches are obliged to swear in to show allegiance to the Hong Kong SAR, Beijing has turned the “sword” into a shield to guard against the growth of pro-independence, or even “hidden pro-independence”, thinking among the populace.

In an explanatory note of the ruling, a vice-chairman of the NPC’s legal affairs committee Zhang Rongshun went one step further. He said: “Those who promote independence will not only be disqualified from standing and taking up the post of Legco members. They should be prosecuted in accordance with the law.” Presumably, Zhang was referring to laws relating to sedition and separatism, which are the components of crimes that SAR is obligated to enact to outlaw under Article 23.

It is therefore no coincidence that Chief Executive Leung Chun-ying made a marked change of stance over the legislation on Article 23, which was suspended indefinitely after half a million people took to the streets against a government bill, among other things, in 2003.

He said enacting a national security law was no longer a mere obligation laid down in the Basic Law. There was, he said, practical importance for doing so in view of the surge of pro-independence activism in recent years.

Under the NPCSC’s ruling, lawmakers must take the oath “sincerely and solemnly”, and must “accurately, completely and solemnly” read it out as prescribed. Failure to do so and failure to show sincerity will lead to disqualification. Lawmakers could face legal challenge if they breach their oath after taking office.

Importantly, Basic Law Committee chairman Li Fei said the idea of “national self-determination” was advocacy of “Hong Kong independence by its nature”, vowing to suppress it without leniency.

With the judicial review case of the Youngspiration pair concluded last week pending a verdict, the standing committee’s ruling will have to be followed by the High Court judge. The chance of them being allowed to retake their oath is almost zero because they are not likely to pass the test of oath-taking set out in the NPC ruling.

Uncertainty lingers over the fate of several pro-democracy lawmakers, in particular Lau Siu-lai, whose oaths may be the subject of fresh challenge by anyone, including the Government, for its validity. If they are ruled by court to be invalid, they will not be given a second chance under the NPC ruling.

The seats of a handful of localists and advocates of “self-determination” aside, the NPC ruling could bring about profound impacts on the city’s democratic movement and the “one country, two systems” policy.

This is because the emergence of localism and the advocacy of “self-determination” represents a widening stream of the city’s democratic movement, who are largely aged 15 to 30.

Being barred from spreading their ideas at the legislature, they will fight for their cause in streets. The ugly confrontation between the a group of protestors and police near the central government’s Liaison Office on Sunday night could be a curtain-raiser to more massive and fiercer street clashes.

Another Occupy Central next year could not be ruled out.

Be the first to comment on "‘Damocles sword’ also shield against separatists, or kind of"