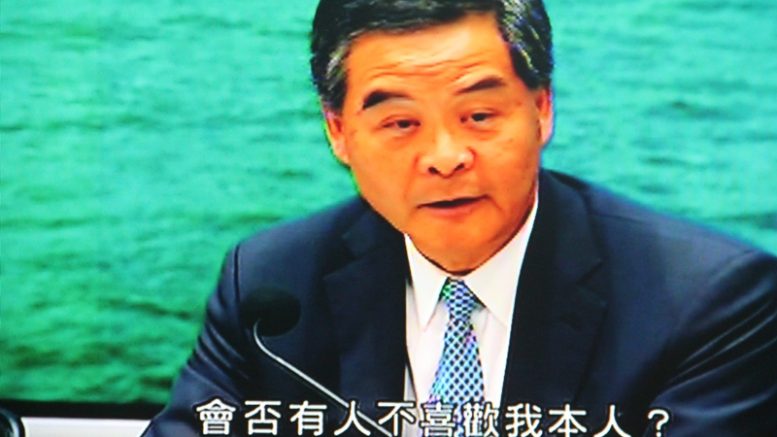 Chief Executive Leung Chun-ying seems to have fought back tears at the end of a press conference on Wednesday as he vows to fight for every inch of land for housing.

But his emotional finale of a press conference he chaired to eradicate conspiracy theory behind a Yuen Long public housing plan was not so well received. His opponents ridiculed his rare outburst as crocodile tears. Fellow citizens seem to be more justifiable feeling sad when they watched the governance of the city going downhill since Leung took power in 2012. 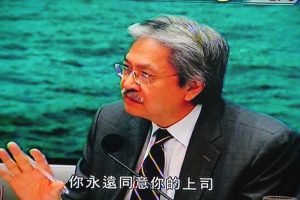 Believe it or not. Financial Secretary John Tsang says he always endorses the views of his boss.

Leung revealed a task force he headed in 2014 had decided to downsize the housing plan from 17,000 flats to 4,000. Detailed follow-up work, he said, was handled by a steering group on land supply chaired by Tsang. Tsang’s office was quick to deny he had decided to bring down the number of flats to 4,000. Mrs Lam’s office said she did not sit on Leung’s task force and Tsang’s land group.

That the top trio of the SAR government seem to have tried to shirk direct responsibility over the controversial decision on the shrunk housing plan fuelled speculation about their infighting ahead of next year’s chief executive election.

Serious questions were raised over the leadership of Leung ranging from steering a team with one heart and one mind to making decisions based on the city’s overall interest and in accordance with the well-established procedures and, also importantly, without fear and favour.

Doubts remained and crucial question about the project are still not yet fully answered, however, at the end of the press conference yesterday.

Leung failed to convince sceptics why he has accepted a report by housing officials, who were said to have compromised on a smaller-scale public housing plan after two rounds of abortive “soft lobbying” among a selected group of rural leaders.

The government’s back-down makes a mockery of Leung’s repeated vows of moving forward against all odds to building affordable homes for residents.

Defending the decision to go for 4,000 flats or nothing, housing minister Anthony Cheung Bing-leung was long in his recap of the views of the opponents made in the private sessions against the original plan to build a total of 17,000 flats. He cited excessive burden on transportation and pollution from the nearby Yuen Long Industrial Estate.

Perhaps more importantly, he pointed to the complex work of taking care of the business activities currently taking place in the brownfield area that fell within the original housing plan. Both he and Leung insisted those activities have served economic and social functions.

Bluntly put, they seem to have given some credence to the theory that the Government has “colluded” with certain rural and powerful forces in the region involved with the business activities on the Wang Chau site.

Worse, Cheung has failed to give details of their “soft lobbying” sessions with the rural leaders. He said they were unable to find records of the meeting, claiming that was not unusual.

The veil of secrecy hanging over the informal session with selected targets and questions about why they were chosen have put Leung and his team in a vulnerable situation.

Even though there are no concrete evidence that shows there might be any wrongdoings involved, the process of decision-making on the Wang Chau plan has been riddled with questions, which remain unanswered.

At yesterday’s press conference, Leung was anxiously keen to convince his fellow citizens he was prepared to do everything he can to find homes for the needy people.

Specifically, he pledged that the second and third phase of Wang Chau was on the agenda and that work was in progress.

But until the Government walks the talk with a detailed action plan to build the remaining 13,000 flats, his rivals will continue to blast them of telling lies and colluding with the power and the rich with vested interests in the area.

Whether Leung’s tearful act was part of his political theatrics aimed to win public sympathy or an outburst from the bottom of his heart is anybody’s guess.

That does not matter.

The harsh reality is that Leung is suffering from a deficit of trust with little can be done to regain the lost faith in him.