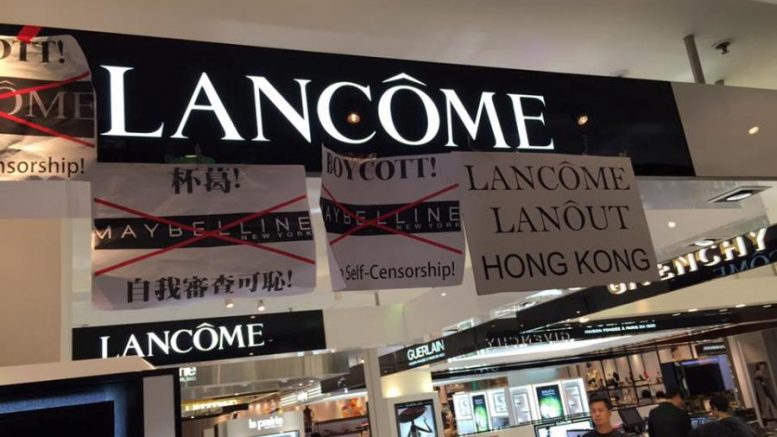 The cancellation of pop singer Denise Ho Wan-sze by international cosmetic giant L’Oreal, the parent company of Lancome, has again rubbed the sensitive nerve of Hong Kong people. Protestors stormed Lancome shops, accusing them of bowing to pressure from the mainland. The cancellation, they say, is an act of self-censorship and political interference.

On June 2, Denise Ho sent an invitation about the concert jointly held with Lancome on June 19 on her Facebook. Her posting was re-posted on Sina’s microblog, followed by a wave of criticism from netizens against Lancome for supporting “pro-Hong Kong independence” singer. There were calls for a boycott of Lancome. On June 5, Lancome issued a statement saying Denise Ho is not their brand ambassador. They expressed deep regret for causing misunderstanding among consumers and decided to cancel the concert.

Commenting on the cancellation, the Global Times, a sister paper of the People’s Daily, said in an editorial on June 7 Lancome is obviously more inclined towards taking into account the sentiments of the mainland public. “The reason is simple: the size of the mainland market is many times of that of Hong Kong’s.”

What is supposed to be an ordinary commercial brand-sponsored performance by an artist has swiftly become a political controversy. Protestors who backed Denise Ho said an international brand should not compromise in the face of Beijing from Beijing. Denise Ho also spoke up. She expressed dissatisfaction with Lancome for only willing to talk about compensation. She called on netizens to join a signature campaign to put pressure on Lancome for them to give a full explanation.

There are previous cases of calls for boycott of products of companies which were alleged of “hurting the feelings of Chinese people.” The Lancome case is different in some aspects. First, the mini-concert is planned for being held in Hong Kong. It was therefore not targeted at the pockets of mainland audience. Why Lancome was down to their knees swiftly after mainland netizens made noises? Secondly, even if Lancome does not want to offend the mainland authorities, they should have only “cooperated” after mainland officials demanded for a cancellation. That would have been a case of “pressure from the authorities.” Now that Lancome “surrendered” just because of calls of a boycott by netizens, they naturally face a barrage of criticism from all sides.

With the easing of travel rules for mainland visitors to Japan, scenes of Chinese tourists snapping up products in Japanese stores have been common. Such calls for a boycott of products from within the society won’t make major impact unless the government steps in to impose a ban on imports from certain countries. The Lancome executives have over-reacted in the Denise Ho incident and inflicted damages to their image. Worse, it poured more oil to the fire of the already-tense mainland-Hong Kong relations. It could not be a more stupid decision.