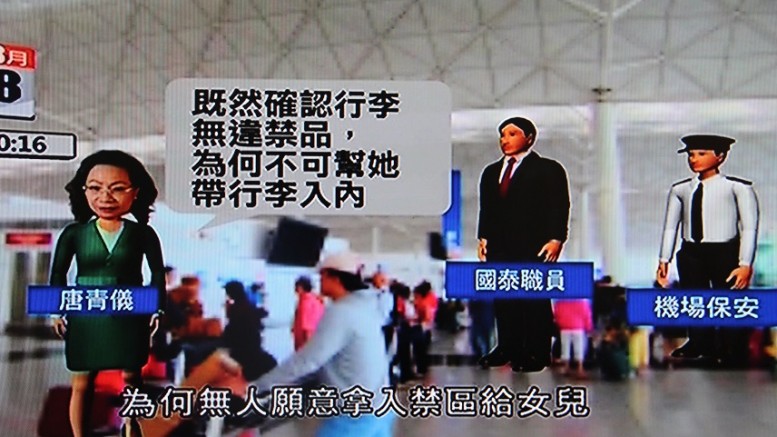 Airport Authority has revealed in a report the wife of Chief Executive Leung Chun-ying has attempted to enter the restricted area to deliver a piece of left luggage to her daughter. Leung has denied it.

An attempt by the Airport Authority to clear the air over the “luggage-gate” saga surrounding a piece of left luggage belonging to Chief Executive Leung Chun-ying’s daughter has failed; it raised new questions about the airport’s security check procedure. Nor it has helped clearing the wrongdoings of Leung and his wife; it has done the opposite.

In a 10-page report released by the Government on Monday night, the Airport Authority has maintained no safety protocols have been breached and special privileges granted.

It recapped the events unfolded after Leung’s daughter Chung-yan sought help from airport and Cathay Pacific staff at the boarding gate for a piece of missing luggage, which was later found at the passenger hall. She was told to return to the non-restricted area to pick up her luggage and go through the security check again. She did not do so.

Her mother was said to be “apparently upset” and had attempted to take the luggage to the pre-immigration point, saying she would take it to Chung-yan at the boarding gate. She was stopped by four airport staff. Separately, Chung-yan passed on her mobile phone to her father, the Chief Executive, for him to talk to a Cathay Pacific staff.  C.Y. was said to have asked for an update of the situation. No further details were given.

The Airport Authority and the security company later asked a Cathay Pacific staff to deliver the luggage to Chung-yan at the boarding gate.

The Authority explained as no suspicious articles were detected, a secondary search was not needed, and the owner was not required to pass secondary security screening with the bag.

The report said Airport Authority procedures allow staff and a relevant contractor to provide “courtesy delivery” of found property to an owner.

It said there were 517 such deliveries between March 2015 and March this year. Those items included travel documents, bags, wallets, clothing and electronic devices. They were all taken into the restricted area and returned to their owners after security screenings.

By lumping Chung-yan’s case together with the 517 deliveries, the airline body is trying to convince critics there is nothing unusual and sinister in the case.

The Authority’s argument, however, was immediately challenged. The Hong Kong Cabin Crew Federation said they have never heard about the “secondary search” arrangement. They warned of security risk if passengers are not required to pass through the security check with their bags.

Questions have also been raised about the relevancy of the 517 cases with Chung-yan’s case because they might not be directly comparable. Under what circumstances the 517 deliveries were made are unclear.

Airport staff deserve praise for abiding by the rules

What is clear is that all cabin baggage shall be screened with the passengers, according to the Aviation Security Programme issued by the Government.

In his defence on Tuesday morning, Leung blamed political parties and cabin crew for staging a protest at the airport’s passenger hall, which needlessly damaged the airport’s reputation. He blamed and condemned the Next magazine for sending two reporters to follow Chung-yan at the campus of Stanford University. 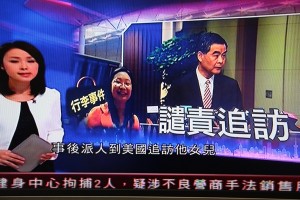 Blame. Blame. Blame. Leung Chun-ying singles out the Next magazine for attack, blaming their reporters for following her daughter at the Stanford University.

He rebuked a claim by the Airport Authority in the report his wife was attempting to enter the restricted area. She, Leung said, was merely hoping to meet her daughter at the pre-immigration point. He blamed language has caused misunderstanding. The fact is the row flared up largely because Chung-yan did not come out to pick up her luggage.

Leung made no mention of his phone conversation with the Cathay Pacific staff; he did not reflect on whether that was an appropriate move and that might have caused misunderstanding. Nor his wife has reflected on her behaviour and said sorry for making a fuss.

Press reports said a Cathay Pacific staff has apologised to Mrs Leung, apparently for the left luggage saga. If true, it could not be more saddening and ironic that he or she was humiliated for having done the right thing: abide by the rules. He or she deserved a pad on the back, not a slap on the face.

Be the first to comment on "Leung’s problem: ‘not my fault, others to blame’"