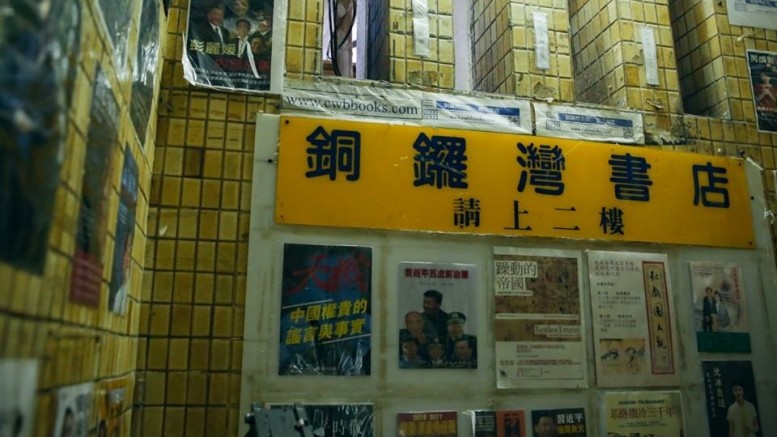 Causeway Books, whose five owners and staff went missing, reopens for business. Two are back home. But questions, doubts linger.

Beijing may not like it, to face it, or even hear about it. The plain truth is that the missing bookseller saga has inflicted more damages than the Mong Kok unrest to Hong Kong, contrary to what Zhang Dejiang may prefer to believe.

It has come as no surprise that Zhang, a Communist Party Politburo Standing Committee member with special responsibility for Hong Kong affairs, has made scathing attack against the alleged rioters in the Mong Kok clashes.

Speaking after a meeting with Zhang in Beijing on Sunday Chief Executive Leung Chun-ying quoted him as saying he was “shocked” and “felt distressed” by the riot. Zhang, who is chairman of the National People’s Congress, reportedly said Hong Kong is a civilised society with rule of law. The eruption of violence in the Mong Kok unrest, Zhang said, would damage the city’s rule of law and international image.

Leung said at the press conference he had already conveyed people’s concern about the bookseller case to the mainland authorities promptly. He said he had not raised the case at the meeting with Zhang.

As Zhang talked highly of the vital importance of rule of law at the Beijing meetings, the quiet return of two staff of the ill-fated Causeway Books, who went missing on the mainland last year, in Hong Kong has raised serious questions about rule of law under the “one country, two systems” policy.

Cheung Chi-ping returned to the city on Sunday morning, two days after his boss Lui Por, a general manager of Mighty Current, a publishing house which specialises in books critical of the Chinese Communist Party. Cheung is Lui’s assistant.

Both have told police they did not require assistance from them and the government. They also asked their relevant missing persons files be dropped.

The pair and the other three, who went missing, including Lee Po, in the past few months one after another have earlier confessed their wrongdoings in video-taped interviews recently conducted on the mainland.

Hong Kong Police said earlier they have met Lee at an undisclosed place on the mainland. At the meeting, Lee has repeated his request for his case dropped and refused to disclose how he returned to the mainland in an illegal channel.

The depth of doubts and suspicion about the bookseller case remains, contrasting markedly with the aftermath of the Mong Kok disturbances.

True, the Government has turned down an independent inquiry on the broader, deeper issues involved in the worst police clash with civilians since the 1967 Riot. But when it comes to the rule of law, police and the government prosecutors have been working within the law to take the alleged rioters to justice. The defendants’ rights, including release on bail, have been observed in court. They will be given a fair, open trial. Those who are found to be guilty will face sentences.

Despite clear political pressure for the court to mete out heavy sentence against the alleged rioters, public confidence in independent judiciary remains high.

Like other cases of the similar kind, there are reasons to believe Mong Kok unrest will testify to the city’s well-tested rule of law and independent judiciary.

The Lee Po case has caused both visible and latent harm to the city’s important institutions, freedoms and systems, which are critical to the viability of “one country, two systems” policy.

The police’s failure to find out exactly how the five “went missing” has stoked fears among people about the capability of their government in protecting their own citizens.

Files set to be closed, but fears linger

Worse still, the lingering fears that certain mainland agents might have kidnapped the booksellers from Hong Kong and Thailand to the mainland have sparked an outcry in Hong Kong and the international community.

If the ugly scenes of fierce clashes in Mong Kok have sparked concern about the city’s public order, the air of eerie silence and the seemingly scripted confessions by the five booksellers have caused more frets about some fundamental strengths of Hong Kong.

The Lee Po case may be too complicated and politically sensitive for Zhang to tell Leung. But Leung is obligated to tell Beijing leaders the profound damages the case could bring and that it should not be seen as a file closed as if it has never happened.