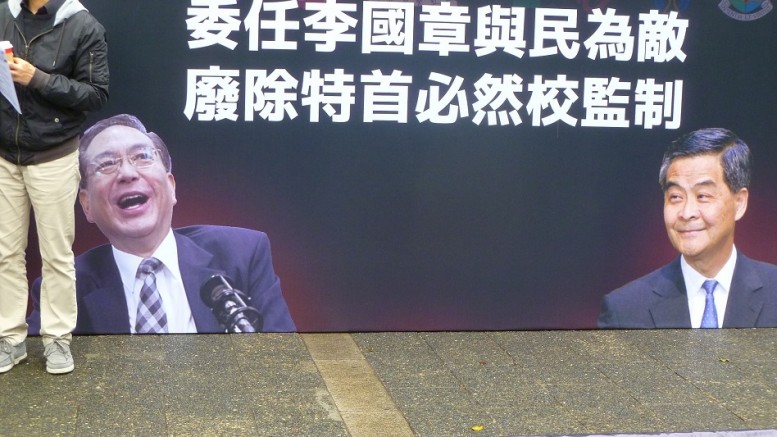 Three points from the broadside launched by “King Arthur” Li Kwok-cheung, chairman of the University of Hong Kong Council, against student leaders, protestors and the Civic Party for inciting “riots” one day after a Council meeting ended in chaos.

When Dr Leong Che-hung finished his job as council chairman with no immediate replacement made in early December, rumours flew in the political and university circle about what might have happened. There was speculation that Li had reconsidered the offer of the hot seat by Chief Executive Leung Chun-ying in view of the fierce opposition against his appointment. Some prominent names had been floated as possible candidates to take the helm of HKU, albeit on a short-term basis. But some pundits, including me, feel adamant the delay in the appointment of Li was only a political tactic to buy time for Leung to pick a better time for an announcement to help lessen its political impact. One of the key arguments was the truth that there is no candidate better than Li if the game plan of Leung is to install a tough guy at the helm to lead the battle against the pro-democracy trouble-makers in the university. The vitriolic attack by Li against student leaders including HKU Student Union head Billy Fung and Yvonne Leung Lai-kwok, who leads a student class boycott campaign, on Thursday shows Li has started doing his job after having chaired the first council meeting. It is first shot in a war backed by Leung to curb the strength and influence of the pro-democracy force in the university. More chaos look inevitable.

Li’s vehement attack against Billy Fung and Yvonne Leung and the Civic Party came in the heels of a seemingly coordinated round of salvos launched by Leung, Chief Secretary Carrie Lam and central government’s Liaison Office director Zhang Xiaoming against lawmakers from the pan-democratic camp in the last few days. The top government and mainland officials fingered at the filibustering of the pan-democrats, which they are adamant were aimed at crippling the Leung administration. Apart from the Legco, HKU has been seen by the pro-government camp as another hotbed of political dissent against the authority and power of Leung, who is ex-officio Chancellor of HKU. Judging from Li’s tough-talk and a similar strongly-worded email sent by Vice Chancellor Peter Mathieson to students and staff, the decision-making Council, the top university body seems to have run out of tolerance and is eagerly keen to send a clear and loud message to students and their pan-democrat mentors for them to avoid stirring up trouble. The switch to a fighting mood reflects a growing feeling of insecurity and sense of crisis among the Leung team and the Beijing officialdom about the governability of HKU and Hong Kong as a whole. Li has described the students’ blockade as “riot.” To the Leung team and Beijing, the city is perhaps already verging on ungovernable.

It is not the first time, nor the last time, the Civic Party has been demonised by Li. Speaking at a radio programme a few months ago, he has already claimed the Civic Party was behind the opposition against the Council’s handling of the appointment of legal scholar Johannes Chan Man-mun as a pro-vice-chancellor. He has repeatedly accused unspecified “external forces” for interfering with the university. He was referring to the Civic Party, among others. Meanwhile, it is open secret that the barristers-led party has emerged as the pan-democratic party the Leung team hates most. At private occasions, senior government officials have often grumbled about the style and approach of the Civic Party, saying it would be difficult to make a deal with them. They were furious at the active role of some Civic Party lawmakers in launching judicial review against government decisions, in particular those concern infrastructure projects. With a Legco New Territories East by-election underway and the full Legco elections just about seven months to go, the Civic Party looks set to continue to bear the brunt of attack by the Leung team and Beijing. The irony is that that may become a blessing in disguise to the Civic Party for them to gain sympathy and support from the populace.