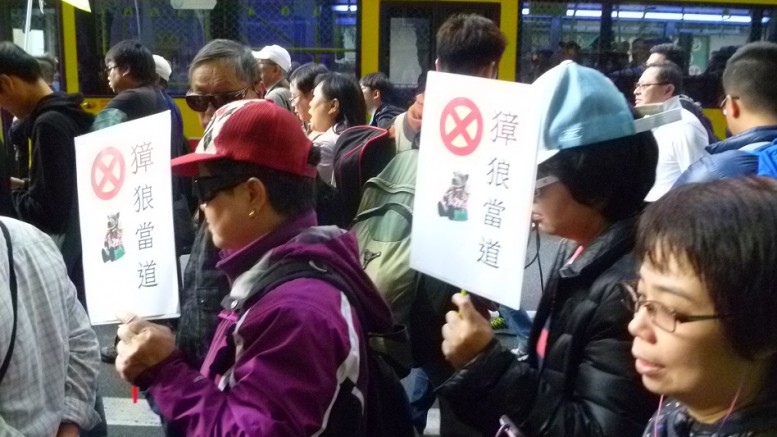 Calls for the resignation of Chief Executive Leung Chun-ying is among a host of public grievances vented out by protestors in the New Year's Day march.

In the longest policy address in recent memory, Chief Executive Leung Chun-ying is long in such details as traffic lights and public toilets, but short in solutions for a set of burning big questions facing Hong Kong. Four points from the 140-minute address delivered by Leung, his fourth in his five-year term, at the Legislative Council on Wednesday.

Featured more than 40 times in his address, the “one belt, one road” grand development strategy spearheaded by President Xi Jinping has surfaced as the pivot of the governing blueprint of the Leung administration. In a post-address press conference, he said he would face grilling not just by the central government but Hong Kong people and business investors if he had missed the “one belt, one road” train. Leung said the enormous interest of foreign governments and businesses in seeking to find out more about the development strategy has shown the importance they attached to it.

But if ordinary people are still perplexed by the “one belt, one road” plan, it is because mainland and government officials have not been able to articulate why the development strategy is important and how it is relevant to their future. Against that background, they can be pardoned for feeling bewildered about the implications and relevancy of a host of “one belt, one road” initiatives. They include a HK$1 billion scholarship for students from countries along the “one belt, one road” and a HK$200 million fund for professional groups to foster exchanges with those countries.

Land and housing and anti-poverty policies have dominated Leung’s first three policy speeches since he took power in 2012. Following the defeat of the 2017 political reform blueprint last year, economic issues have emerged as the natural theme in this year’s policy address. This is simply because he needs to show he is not just interested in wealth redistribution seen by cynics as a tactic to please the poor. He faces pressure from within the community and the Beijing leadership for him to capitalise on the country’s economic reform to lift the city’s economic development to a new height. The “one belt, one road” initiative has provided a readymade platform for him to anchor his economic strategy. With innovation and technology becoming a key to the new economy and that a new bureau in charge of that area is now up and running, Leung has delivered a slew of new initiatives and funding programmes to try to silence doubters about his IT strategy. Fairly speaking, Leung’s strategy in IT and new economy should be faulted. But ordinary people will be more concerned about the state of Hong Kong in 2016 with signs of a slowing Chinese economy and uncertainty about the city’s economic out look growing.

Jitters about the city’s economic vitality aside, the recent missing bookseller saga has deepened fears about the widening gulf between the promise and reality of the “one country, two systems” policy. The mystery surrounding the whereabouts of shareholder Lee Bo and his four partners and staff has raised serious questions about basic civil rights and freedoms and the city’s high degree of autonomy. The bookseller saga is the latest, or one of the worst, of a string of cases in recent years that has touched on the hyper-sensitive “one country, two systems” zone. The fact Leung has failed to seize the opportunity of his annual speech to try to give assurances to his fellow citizens is not surprising. But it does partly explain a marked drop in his popularity rating in a tracking poll published this week. Calls for his resignations were loud from the procession in the New Year’s Day march.

At the domestic level, the spate of interruptions by radical legislators who were expelled by President Tsang Yok-sing at the Wednesday session say a lot about the abnormal government-legislature relation. His latest policy initiatives may sound brilliant. But hopes for effective governance are dimmed by the worsening ties between the Leung administration and the legislature, in particular the pan-democratic camp.

One hour before Leung took the stage, United States President Barack Obama gave a televised speech, also his final State of the Union address, to his fellow citizens. He was facing the same, if not worse, problem of political divisions. He has confessed disappointment in his failure to heal the divide. Still, he has attempted to set forth an ambitious vision for America’s future and paint a hopeful picture of the nation. In stark contrast to Obama’s uplifting address, the lack of the “wow” factor in Leung’s policy speech, both in substantive plans and in rhetoric, has turned it into an unexciting event. Make no mistake. People have few qualms about such well-intentioned initiatives as fixing the traffic lights for elderly people to have a safer passage. They hold out hopes for the government to fix bigger problems including strained mainland-Hong Kong conflict, malfunctioned political system, poisoned employer-employee disputes in retirement and labour issues, weakened economic competitiveness and lingering youth grievances. In Wednesday’s blueprint, Leung has gone in length to impress citizens he would make arduous efforts to tackle problems, but refrained from rekindling hope for facing up to the bigger challenges.

Be the first to comment on "Leung long in small issues, short in big questions"