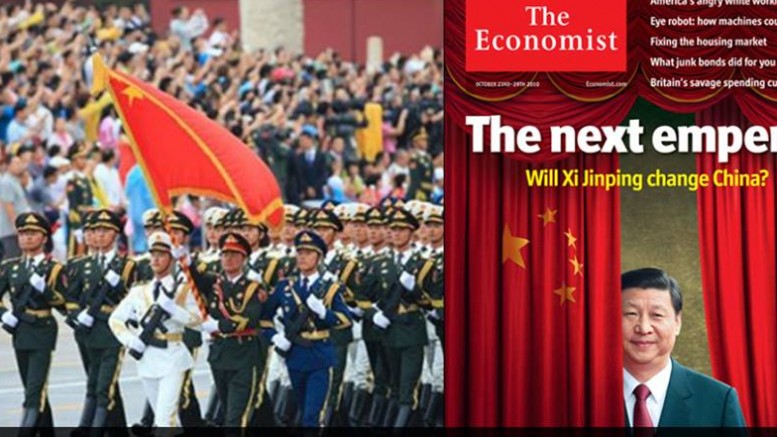 Officially, the military parade at Tiananmen Square on September 3 marks the 70th anniversary of the “Victory of the Chinese People’s War of Resistance Against Japanese Aggression.”

The state-of-the-art jet-fighters and missiles on display are supposed to strike fear into the heart of “right-wing militarists in Japan,” a reference to the nationalistic administration of Prime Minister Shinzo Abe. The official media’s attacks on Abe have not abated despite the fact that in his August 15 speech commemorating Japan’s 1945 surrender, Abe followed predecessors Tomiichi Murayama and Junichiro Koizumi by mentioning Japan’s “deep remorse and heartfelt apology” for WWII atrocities.

Yet for political circles in Beijing, the forthcoming military extravaganza looks more like a “Chinese-style coronation ceremony” whose major purpose is to consolidate President and party General Secretary Xi Jinping’s status as undisputed strongman.

While late patriarch Deng Xiaoping took over power from the hated Gang of Four in late 1978, his status as supreme leader was not confirmed until the October 1, 1984 military parade marking the 35th anniversary of the founding of the PRC. Similar ceremonies celebrating the PRC’s birthday in 1999 and 2009 marked the high-point of the careers of respectively ex-president Jiang Zemin and Hu Jintao.

Jiang, however, had to wait ten years – and Hu seven years – for their moment of glory after becoming Communist Party General Secretary.

President and commander-in-chief Xi, however, has amassed so much power in less than three years that he could deftly turn a show of force against Japan and other “anti-China hostile forces” – usually a shorthand for the United States – into his own coronation ceremony.

Similar to other major events in Beijing such as the Summer Olympics of 2008 and the APEC conclave last year, smoke-belching factories have been closed down to improve the capital’s notorious air quality. The Air Force is also on standby to ensure that the sky has the requisite “military parade blue.”

While it is unlikely that poisonous gas such as sodium cyanide and nerve gases released during Tianjin’s cataclysmic explosions on August 12 will waft as far as Beijing, the Tianjin disaster has cast a deep shadow over Xi’s great day.

Talk about top-level division as to how to handle the catastrophe, which has cost some 145 lives (believed to be a grave underestimation by most foreign and Hong Kong reporters) has focused on a series of out-of-the-ordinary developments.

Firstly, Premier Li Keqiang did not show up in Tianjin – which is just 60 minutes by car from the capital – until five days after the disaster. This breaks the long-established tradition set by his predecessor, former premier Wen Jiabao, that the head of the central government should be on the scene of major natural or man-made disasters within 48 hours.

Equally intriguing is the fact that while Li’s brief visit to Xinjiang was reported on Chinese TV news the same evening, there was no video footage of the premier’s activities.

Also unusual is the fact that the Major and Acting Party Secretary of Tianjin Huang Xingguo, who is a member of the so-called Zhejiang Province Faction that is close to Xi, did not face the public until seven days after the explosions. And although Huang said in a press conference on the 19th that he would “take unshirkable responsibility” for the accident, it is believed that Xi does not want the former senior Zhejiang Province official to go.

Moreover, while the state media disclosed after almost a week that the bosses of Ruihai Logistics International – the owner of the dangerous chemicals — were the kin of vice ministerial-level officials, there is strong speculation that they also enjoy the protection of one or more former Politburo Standing Committee members.

Diplomatic sources in Beijing said that members of Xi’s kitchen cabinet, including Politburo member and Director of the Central Committee General Office Li Zhanshu, had ordered a secret internal investigation as to whether the explosion was linked to a “conspiracy against the top leadership.”

Even though the sources discounted the possibility that the Tianjin calamity was related in any way to wild rumors about coups d’etat or assassination attempts against Xi, the leadership’s mysterious handling of the mishap clearly shows that the President’s grip on power is still far from complete.

And if Xi’s real and potential political foes were to mount an attack against the strongman, they could use no other handy pretext than the super-ambitious honcho’s unsubtle use of the WWII-related parade to cement his status as the “Mao Zedong of the 21st century.”