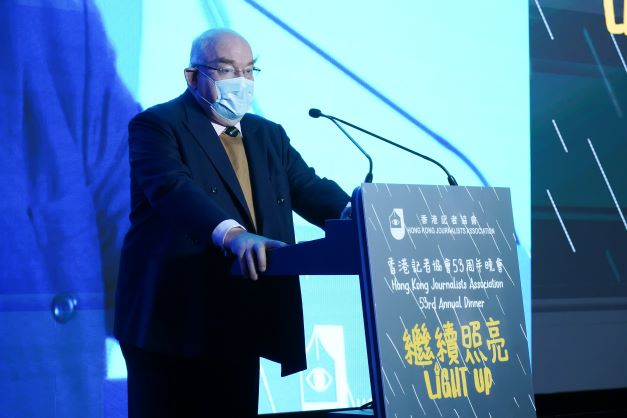 There is no better time than the fag end of a miserable year to get together. It is a time when the tinsel trappings of Christmas and New Year encourage the raising of glasses in the spirit of goodwill and fellowship. It is a time for reflection but also looking forward.

Looking back over the last year, you do not need me to tell you that press freedoms have been curtailed.

I will not go into why this is so lest my explanation makes me appear to be a dissident, a person who should know better but persists in erroneous beliefs that could even be seen as tending towards the seditious or even subversive.

So, like many of you here, I choose my words carefully in case someone listening takes offence at my suggestion that things are not what they used to be and that we are the worse off for it.

What can I possibly say that might encourage you to continue in your career at such a time?

I think that the best medicine for weary journalists’ souls, for those of you that still have them, that is, is to remind you of some of the ideals of journalism.

The profession will endure as long as people want to be informed about what matters and judge what is true and false.

Although it is self-evident, the starting point for inquiry into the need for journalists needs to be stated clearly: Truth exists, but lies are invented.

People usually prefer to know the truth even though it is unwelcome, like a dismal medical report from a cancer specialist. In fact, no one with any self-respect likes being lied to.  This is the case, whether the lie comes from an employer, a colleague, or an official or authoritative source like a government department or a public body.

The journalist’s job is to expose falsehoods when they affect us all or even just a minority. The duty to cater to minority interests is crucial because they suffer most from lies those who pander to majoritarian or populist interests.

When lies are as plain as a pikestaff, the job of exposing invention should not be difficult. Journalists should be able to skewer blatant untruth and leave it writhing on the point of the pen.

However, exposing plausible falsehoods and undoing the results of careful evasions is not always that easy. We all must remember that human beings have an almost infinite capacity to take things for granted.

The lie that has wings to fly far and wide is often sugar-coated. It may masquerade as a self-evident truth that appeals to established prejudices. Anyone who openly disagrees with or questions the invention may be ridiculed or vilified and set at the margins of the debate or, worse still, excluded altogether from it.

Then, the journalist’s job is more complicated. A good journalist must then peel off the onion skin of plausibility and careful dissimulation to reveal the truth.

Journalists do not have a monopoly on truth, far from it. But the conscientious and fearless pursuit of truth to inform and educate others is the essence of the journalist’s craft.

A great literary figure recognised the value of an unconstrained inquiry into Truth nearly four centuries ago.

In 1644, John Milton, the ‘Paradise Lost’ poet, made a public plea to remove a government licensing scheme requiring all books to be approved before publication. 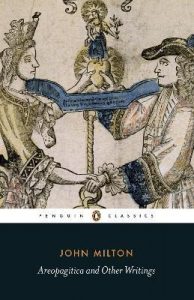 The pamphlet was called Areopagitica; A speech of Mr John Milton for the Liberty of Unlicenced Printing, to the Parliament of England. The government had not approved its publication. However, no one brought a prosecution against Milton for making what remains the best-known and most eloquent argument for a free press. I will give you short quotations from the pamphlet that need saying today.

‘Where there is much desire to learn, there of necessity will be much arguing, much writing, many opinions; for opinion in good men is but knowledge in the making’

‘Give me the liberty to know, to utter, and to argue freely according to conscience, above all liberties.’

‘Who kills a man kills a reasonable creature, God’s image; but he who destroys a good book, kills reason itself, kills the image of God, as it were, in the eye.’

‘Though all the winds of doctrine were let loose to play upon the earth, so Truth be in the field, we do injuriously by licensing and prohibiting to misdoubt her strength. Let her and falsehood grapple; who ever knew Truth put to the worse in a free and open encounter?’

That leads me to the topic of ‘fake news’. What to do about it? Does the government have responsibilities in this area apart from not manufacturing it?

The issue is not new. Competing narratives that claim to be true can be hard to resolve. It sometimes suits people and public authorities to ignore manufactured news and let things be. Maintaining the status quo may be to hold onto an advantage or simply because it is too difficult to clear up a misstatement and upset a settled state of affairs.

“‘Quid est veritas?’ or ‘What is truth?’ said Jesting Pilate who would not stay for an answer” is the opening sentence of the essay ‘On Truth’ by Lord Bacon, a seventeenth-century English judge and philosopher.

Pontius Pilate spoke these words to Christ before he hurried away after surrendering him to the religious authorities that would later crucify him, even though Pilate thought he was innocent of the charges brought against him.

Pilate’s words recognise that there is a truth that an official can ascertain what is true with some effort but that it may be inconvenient to do it just at the moment.

As you know, some journalists can deploy their skills to craft inventions to advance a cause or give priority to a partisan point of view that they know is false or suspect at the very least.  That is reprehensible.

‘Fake news’ can speed through the internet and settle on the screens of our devices or desk computers. Although the news is frequently obviously false, it sometimes can appear accurate and well-sourced. That is why it is dangerous.

‘Fake news’ that journalists knowingly serve up tarnishes the image of the profession. It makes the result of the contest described by Milton of Truth and Falsehood struggling against each other a less predictable competition where Truth wins at the end.

As one commentator on the subject has observed,  the problem is not so much that people get to believe in what is ‘wrong’, i.e. pure invention, but that people begin to have doubts about what is ‘right’, i.e. the Truth.

That uncertainty about what is true and what is false breeds mistrust and encourages inherent prejudices and biases.

It’s a hard nut to crack. What is to be done?

I cannot offer a sure solution. The remedy is, I think, education and the insistence on high standards of reporting by news publishers and journalist bodies.

Education about values and inquiry into Truth is most effective when done early in schools and colleges. It means fostering a spirit of inquiry and encouraging a healthy suspicion of dogma and simplistic views and attitudes.

That means allowing educational bodies, particularly universities, independence so that there is the cross-fertilisation of ideas and views. If universities cease to be places of ‘light, liberty, and learning’, as they were described by the nineteenth century politician Benjamin Disraeli, they cease to be relevant to society.

Journalists need to abide by their Code of Ethics and be accountable if they breach it. I can see the case for a Press Council with an enlarged remit that does not merely cover prurient or indecent stories and intrusions into private life but handles complaints about made-up news stories and unbalanced reporting.

I do not, however, see the need for government regulation.  The road to Hell is paved with good intentions, and a maternalistic wish to keep us all from harm from untruths on the internet is perhaps well-intended. However, it is likely to create a government body resembling Orwell’s Ministry of Truth from 1984 when belief in obvious invention becomes a required orthodoxy and dissent is fatal.

I end with a quotation from Orwell in his 1946 essay ‘The Prevention of Literature’. It is a plea for boldness and clarity in writing under challenging times. I urge you to read it.

“Political writing in our time consists almost entirely of prefabricated phrases bolted together like the pieces of a child’s Meccano set. It is the unavoidable result of self-censorship. To write in plain, vigorous language, one has to think fearlessly, and if one thinks fearlessly, one cannot be politically orthodox.”

Philip Dykes, QC, SC, is a former Chairman of the Hong Kong Bar Association. This is the full text of the speech given by Philip Dykes at the 53rd Hong Kong Journalists Annual Dinner on December 28, 2021.

Be the first to comment on "Truth exists, but lies are invented"