Co-leading a campaign to relaunch Hong Kong in the wake of the 2019 political turmoil, former Chief Executive Leung Chun-ying has underlined the importance of Hong Kong in helping bridge the divide between China and the world.

That he spoke of the unique role of Hong Kong on the eve of the 32nd anniversary of the June 4 crackdown, which will, for the second time in a row since last year, see the annual candlelight vigil being banned, could not be more ironical.

This is simply because the annual commemoration at Victoria Park and the images of a sea of candlelights had provided a powerful example of how the policy of “one country, two systems” works. Putting aside Taiwan, Hong Kong was the only place on Chinese soil where commemorative activities of the June 4 killings were allowed. That is now history.

Citing the Covid-19 epidemic, Police rejected the application of a commemoration by the Hong Kong Alliance in Support of Patriotic Democratic Movement in China at Victoria Park on June 4 last year.

Dozens of Alliance leaders and pro-democracy activists, including Next Media Group founder Jimmy Lai Chee-ying and young leader Joshua Wong, joined thousands of citizens at the annual commemoration. Police stood by outside the park and made no attempt to stop people from entering the park, nor making arrests after the event finished.

Police’s inaction was later proved to be merely tactics. The activists were later charged with participating in unlawful assemblies. They were convicted and were given jail sentences in terms of months.

Coming weeks before this year’s June 4, the harsher-than-expected sentencing has sent more chilling wind across the city. The Alliance has announced they would not hold any commemorative activities under their name on June 4. 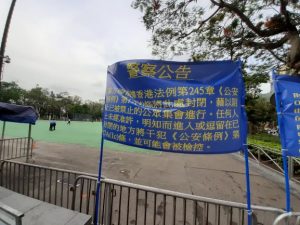 Almost 32 years after the June 4 crackdown and 24 years after the 1997 handover, June 4 commemoration has increasingly become a political taboo and “red-line” dangerous topic..

Following the promulgation of the national security law for Hong Kong in July last year, the Hong Kong government could no longer be able to play around the grey area in anti-subversion legislation to turn the June 4 commemoration into an opportunity of public relations promotion of the city.

Although it is crystal clear that the Alliance has posed no substantive threat whatsoever to national security, its mere existence has provided an easy target of attack by the hardliners in the pro-Beijing camp after a law on national security is in place.

At the brunt of the attack against the Alliance is one of their five demands, namely the end of one-party dictatorship.

It is still unclear whether the Government will act to de-register the Alliance and, if so, on what legal grounds.

Any move to ban an organisation because of a slogan that is deemed as subversive looks certain to face challenge in courts. It will also be bad publicity for Hong Kong.

Speaking at a symposium on Monday, Leung gave a speech on the mission and role of Hong Kong in China’s image-building. He lamented China faced groundless allegations of “suppression of democracy, human rights and freedom.”

Hong Kong, he reckons, has a unique role and mission in restoring the balance of the “China

issue” in the international community by giving the Hong Kong view to international media and audiences under the “one country, two systems” policy.

What Leung said had been the original intent of “one country, two systems” political framework and the decision of allowing the annual June 4 commemoration in the city.

Now that Hong Kong is itself a victim of human rights violations by the communist authorities, it is unrealistic and naive to expect it can play a role in telling the China story to the world.

With the candlelights at Victoria Park vanishing on June 4 evenings,  Hong Kong only has a sad story of “one country, one system” to tell.

This article was published on the Apple Daily website on June 2.