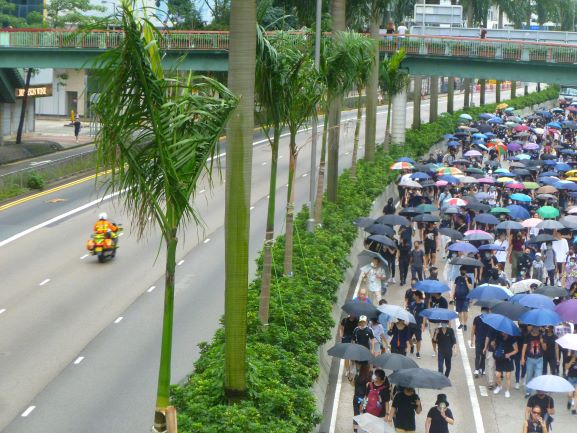 A rally organised by the Civil Human Rights Front in Hong Kong Island.

Formed in the heyday of the 2003 July 1 march, the fate of the Civil Human Rights Front, an umbrella body composed of pro-democracy groups, is in the balance following the departure of several major group members. Like it or not, its days seem to be numbered. Ta Kung Pao called on the Government to ban the body, which is reportedly not an officially registered body.

Media reports quoted sources as saying the Democratic Party, the flagship of the democratic camp, decided to quit the pro-democracy coalition. They followed the footsteps of the Professional Teachers’ Union who announced their departure on Sunday after considering the “recent political situation.”

The Neighbourhood and Workers Service Centre was the first to quit, one day after a Singaporean newspaper reported on March 5 that the front would be targeted by the Hong Kong government and might be outlawed. Other groups that left include Neo Democrats, the Hong Kong Association for Democracy and People’s Livelihood, the Civic Party and the Justice and Peace Commission of the Hong Kong Catholic Diocese.

Media reports said the front is being investigated for, perhaps among others, being supported by the Washington-based National Endowment for Democracy, funded by the United States Congress.

The NED was said to have provided financial assistance to the front for staging certain events, an act which could constitute an offence under the national security law imposed on Hong Kong in late June last year. The law is supposed to have no retroactive power. The NED funding has not been officially confirmed.

But at a time when dozens of democrats are facing charges ranging from national security to unauthorised assembly, many of their organisations do not want to take more risk.

Severing ties or distancing from the pro-democracy coalition will no doubt deal a body blow to solidarity and morale. But the immediate challenge they face is survival from the ongoing political crackdown.

Media reports said the front has a total of more than 40 pro-democracy groups, including major political parties, unions and human rights groups. 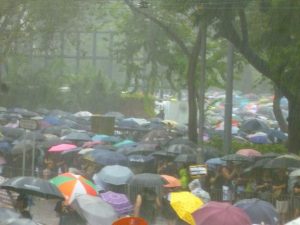 Thanks to the government debacle of Basic Law Article 23 legislative work in 2003, the front was formed in the wake of the

500,000-strong protest on July 1, providing a platform for the pro-democracy groups to hold rallies. It has played the leading role in holding the two annual protests on July 1 and the New Year’s Day since then.

Given its nature of being a loosely-composed coalition for major rallies, it is not surprising that it is not well-organised. In

revealing the police investigation, a Singapore newspaper said the front has not registered with the government and its finance is not well-managed.

Apparently, the Government has turned a blind eye to the unique background of the front. Ironically, key figures of the front had closely worked with the Police on the security arrangements during the rallies since 2003 until the recent years when relations grew tense.

Claims that the operation of the front without government registration could provide a good reason for the Government to conduct a full investigation into the pro-democracy body that has triggered the withdrawal or suspension of groups from the coalition.

The political and legal risk of the front to keep its operation will now be high. The front said they have written to all member groups for them to consider their membership. It should not come as a surprise that more may quit.

The imminent demise of the front will signify the end of an era of the city’s democratic development spearheaded by pro-democracy political parties and civil society groups loosely held together by the front since 2003.

Although various political and social groups had different demands in the annual July 1 and New Year’s Day rallies, the front had helped rally them together under the same theme banner and slogan.

The central role of the front in rallies had already faced challenge in the 2014 Umbrella Movement when protesters taking the lead themselves in the 79-day movement being likened as a “leaderless movement.”

Its role in the 2019 anti-extradition bill protest had also been further marginalised. But still, the front has a role, both symbolic and substantive, in the city’s democratic movement by organising rallies.

In the face of a seemingly attack on the front, the possibility of a break-up is no longer remote.

With all major pro-democracy political parties being crippled by lawsuits and the threats of being kicked out from the district councils and disqualified from joining elections, their capability of forming a new coalition similar to the front for organising mass rallies is questionable.

The democrats no longer have a choice. The previous mode of fighting for democracy in an organised and big-bang manner is no longer feasible and practicable.

Breaking up into parts with each group and individual fighting their own battles seems to be the only way out to keep the light of democracy in darkness.

This article was first published on Apple Daily website on March 17 with slight revision.