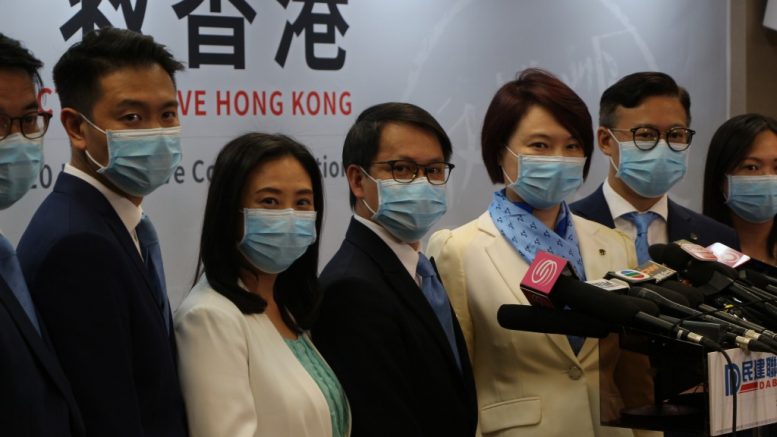 Patriots are to run Hong Kong under an election overhaul.

Dubbed as an ultra-leftist, Shiu Sin-por, a close confidante of former chief executive Leung Chun-ying, is not known for liberal views over such political issues as the electoral system and the strategy towards the democrats in Hong Kong.

He raised some eyebrows on Sunday (February 28) when he warned of an “overkill” in Beijing’s move to rewrite the city’s electoral arrangements for the chief executive and the Legislative Council.

Shiu, who was head of the now-disbanded Central Policy Unit under the Leung administration, was speaking at a session chaired by Xia Baolong, Director of the State Council’s Hong Kong and Macau Affairs Office in Shenzhen at the weekend.

The closed-door session was held to tap the brains of people whom Beijing trusts on how to overhaul the electoral system to ensure those who run Hong Kong are “patriots.”

In his remarks, Shiu said the pro-democracy force has already become crippled after the national security law took effect, followed by a series of “actions,” with democrats being jailed, having fled and quit politics.

Democrats, he said, could no longer pose strong resistance against the authorities. He urged the central authorities not to “overkill” when revamping the electoral systems.

Shiu did not elaborate. But it is abundantly clear that the order dictated by President Xi Jinping to redefine the policy of “Hong Kong people ruling Hong Kong” to become “patriots running Hong Kong” has been taken to the extreme, posing the danger of an overkill.

With the rules of the electoral game now open for a rewrite, the past few weeks saw a boom of ideas loaded with selfishness and madness in the name of “patriots governing Hong Kong.”

They include selecting the chief executive by consultations, not election, mooted by Leung Chun-ying. Proponents of the idea questioned the wisdom of giving every Hong Kong citizen a ballot for them to cast a vote of defiance against Beijing in elections.

Leung asked why not, citing both the Sino-British Joint Declaration and the Basic Law say the Chief Executive shall be selected by election or consultation.

The so-called “consultation theory” was echoed by his close confidantes and newspapers backed by the central government’s Liaison Office. It was flatly rebuked by Chief Executive Carrie Lam Cheng Yuet-ngor and his top adviser in the Executive Council, Bernard Chan. Former chairman of the Democratic Alliance for the Betterment of Hong Kong, Tsang Yok-sing, has also cast doubts about the merits of Leung’s idea.

But the tussle within Leung and Lam seems to be short-lived. The focus of the revamp of the electoral system under the guiding principle of “patriots running Hong Kong” now centres on the formation of the Election Committee for the Chief Executive election and the Legislative Council.

Speaking on the first of the two-day session in Shenzhen, Rita Fan Hsu Lai-tai, a former member of the National People’s Congress Standing Committee and Legco president, gave her backing to the idea of stripping the right of district councillors in electing among themselves more than 110 representatives in the 1,200-strong Election Committee. The five functional constituency seats being elected by all district councillors to the Legco should also be abolished, she said.

Held just days before the NPC is set to pass a set of amendments to the city’s electoral system in its annual session scheduled to begin on Friday, the ideas floated by Mrs Fan at the Shenzhen meeting seems to have the blessing of Beijing.

But even stripping the role of district councillors in electing the chief executive and five Legco seats is no doubt not enough to meet the appetite of Beijing, who wants absolute control over the Chief Executive and Legco elections.

One line of thinking floated at the Shenzhen meeting was to give a bigger role to the local deputies to the NPC and Chinese People’s Political Consultative Conference in both elections. Given the fact that the Liaison Office is vested with enormous powers in the composition of the NPC and CPPCC, the idea will effectively give greater powers to the Liaison Office in the city’s two major elections.

Under a system masterminded by Beijing, the room for the democrats will be drastically reduced, if there is any at all.

It is difficult to ascertain the motives of Shiu in his uncharacteristic call for restraint. But regardless of his motives, an overkill of electoral revamp is obvious. When patriotism is being used as a tool to grab seats and to rob a fair chance of others with dissenting views in polls, both patriotism and election will look cheap and ugly.

This article was first published on Apple Daily website on March 3.

Be the first to comment on "Patriotism could make elections ugly"