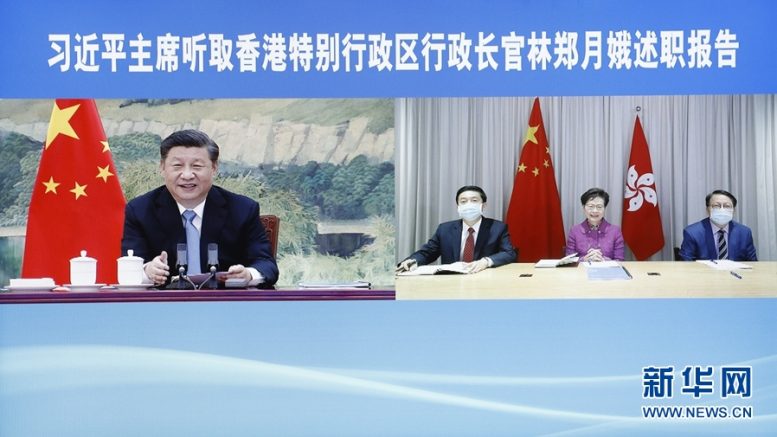 Liaison Office director Luo Huining sits next to Carrie Lam as she reports duty to President Xi Jinping via online.

It was presumably coined by China’s late patriarch Deng Xiaoping, also known as the nation’s chief architect of reform, in the early 1980s. With hindsight, his slogan-turned-policy of “Hong Kong people ruling Hong Kong” began its journey towards death when it came to life on the first of July, 1997.

Deng, who died in February that year, did not live to see for himself the historical, but also lamentable, moment.

Almost exactly at the mid-point of the 50-year-long guarantee period of Deng’s policy, which is a key component of the “one country, two systems” formula, the communist-led Chinese government has effectively started running Hong Kong through its Liaison Office, whose headquarters is located in Western District.

Welcome to the new era of “Western ruling Hong Kong”.

Speaking at an online spring reception he hosted on Friday last week, Liaison Office director Luo Huining spelled out “four judgements” on Hong Kong in the wake of the protracted social movement ignited by the anti-extradition bill protest in 2019.

While reiterating the principle of “one country, two systems” and that residents’ rights and interests will not change, he played the livelihood card, vowing to take bigger steps to revitalise the economy and improve livelihood.

Luo promised “more precise and effective measures” would be rolled out to address crucial livelihood problems in areas such as employment, income, land, housing and health care. 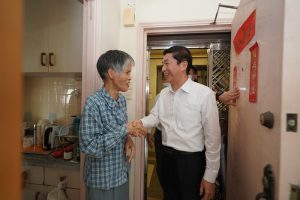 As if she has already given an advance copy of Luo’s speech, Chief Executive Carrie Lam Cheng Yuet-ngor made a surprise announcement at a question time at the Legislative Council on Thursday a list of five legislative plans to be tabled for scrutiny in the current legislative year.

The legislative plan covers rent control of divided flats aimed to ease the financial burden of low-income families and relaxation of rules governing the practising of non-locally trained doctors in local hospitals. Officials say an easier entry of non-local doctors could alleviate the shortage of doctors. But local doctors opposed the move.

Announcing her legislative plan, Lam admitted that she would not have taken the “bold” move if the present Legco were what it was last year. She was referring to the legislature when the pro-democratic camp still held slightly more than one-third of the total number of seats.

Following the resignation en masse of the pan-democrats after four of them were disqualified, the pro-establishment force took full control of the legislature, ensuring a smooth sailing of almost anything the Government puts forward to them for an approval.

In the words of Lam, the present legislature with almost one-third of the seats left vacant has returned to “normal” operation, thanks to the intervention of the National People’s Congress Standing Committee by ousting four lawmakers through a newly-imposed law on oath-taking.

Based on the NPC decree on oath-taking, Lam has indicated last week enacting a local  law to make it mandatory for district councillors to do, which is set to pave the way for a fresh round of DQs (disqualifications).

The mass ousting of the democrats from the Legislative and District Councils is in line with the assertion of President Xi Jinping at his online session with Lam last month about the notion of “patriots ruling Hong Kong.”

Heeding Xi’s calls for the patriots to run the city, the Democratic Alliance for the Betterment of Hong Kong, the pro-establishment flagship, launched a campaign entitled “Reform Hong Kong” days after Xi spoke.

On their reform blueprint is a vow to take a bigger role in running Hong Kong. Chairwoman Starry Li Wai-king, who has been tipped as a contender for the top post, later said they have no plan to field a candidate in the 2020 chief executive election.

The timing of the DAB’s “Reform Hong Kong” campaign is intriguing. It came amidst the eclipse of the democratic force from the political structure and the increasing assertiveness of the Liaison Office in Hong Kong polity.

Commenting on Luo’s spring reception remarks, Professor Lau Siu-kai, a leading Hong Kong adviser to Beijing, said the “shape” of governance of Hong Kong is changing towards a “iron triangle” structure composed of three forces. They are the central government, the local patriotic force and the Hong Kong government – in that order.

Gone missing in the new equation is “Hong Kong people.” What would Deng have to say if he was alive?

Be the first to comment on "It’s ‘Western’ ruling Hong Kong, stupid!"