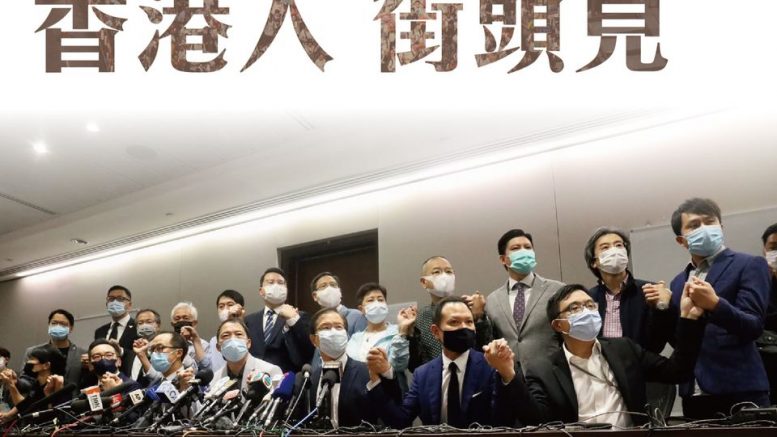 Democrats vow to take to the streets after they quit legislature in protest against the ousting of four lawmakers by Beijing.

Speculation that Joe Biden, who looks certain to succeed Donald Trump as the next US President, may play softer towards China and on Hong Kong issue could be laid to rest with four more pro-democracy legislators ousted on Wednesday.

They were accused of breaching Basic Law Article 104, which says legislators should uphold the Basic Law and swear in allegiance of the Hong Kong SAR.

Another 15 pro-democracy lawmakers told reporters on Wednesday they would resign en masse as they vowed when speculation of another purge of the democrats emerged on Monday..

A mass resignation of pro-democracy legislators, who got more than half of the votes in previous geographical constituency elections, will effectively make the legislature illegitimate.

It will deal another body blow to the city’s “one country, two systems” constitutional framework, under which the principle of “Hong Kong people ruling Hong Kong” is manifested in democratic elections.

Coming at a time of transfer of leadership in the US, a mass resignation of the democrats in the Hong Kong legislature will put enormous pressure on Biden for him to talk, if not act, tough, towards Beijing.

This looks like the last gift Biden wants from the Chinese Government for his success in thwarting the re-election bid of Trump.

Already having a host of domestic and international problems on his plate, the issue of China, let alone Hong Kong, is not likely to be high on his agenda.

In his victory speech on Saturday night, Biden has sought to convince fellow citizens he is a uniter, not divider. And top of his agenda is to put Covid-19 pandemic under control for the economy to thrive again.

By putting an end to Trump’s unilateralism, he is said to be prepared to re-enter the Paris accord on climate change. A rethink of Trump’s decision to quit the World Health Organisation is also likely.

A renewed commitment of international cooperation, however, does not necessarily mean Biden will drastically change its China policy from competitors, if not foes, to partners and friends.

For a long period of time, differences between the Democrats and the Republicans over their China policy have become indiscernible and insignificant. Both parties have adopted a hardened stance towards the communist-led government, be they about trade, Taiwan or human rights.

The US is not alone in playing tougher towards China in recent years as they woke up to the reality of China’s ascendance. China’s pledge of peaceful rise has turned sour. Increasingly, the communist power has been seen more as a threat in different parts of the world.

China’s economic might has posed a threat to the domestic economy of nations around the world, followed by their political influence, or having both coming together.

China’s poor human rights and suppression of rights and freedoms in Xinjiang and Hong Kong have put them on collision with countries, in particular the US and leading countries in Europe, including Germany and France.

Together with claims that China should take the blame, at least partly, of the blame of the Covid-19 pandemic, public perception in different parts of the globe towards communist China grew negative. Foreign governments are under more pressure from their citizens for them to guard against the new superpower in the Orient.

Although Biden may want to have less hostilities in the US-China ties, the room for more cordiality is limited, in particular over political issues such as human rights, Taiwan, Xinjiang and Hong Kong.

The best he could possibly do is to avoid a spill-over of the political differences to cooperation and dialogue on other non-political spheres such as trade and climate change.

This will be easier said than done for obvious reasons. The lack of self-restraint of the communist leadership over Taiwan, Hong Kong and Xinjiang has left foreign governments with no choice but to continue playing tough.

The latest purge is the latest act of mutual-destruction of Beijing; and it will not be the last.

This article is an updated version of an article published on Apple Daily’s website on November 11.