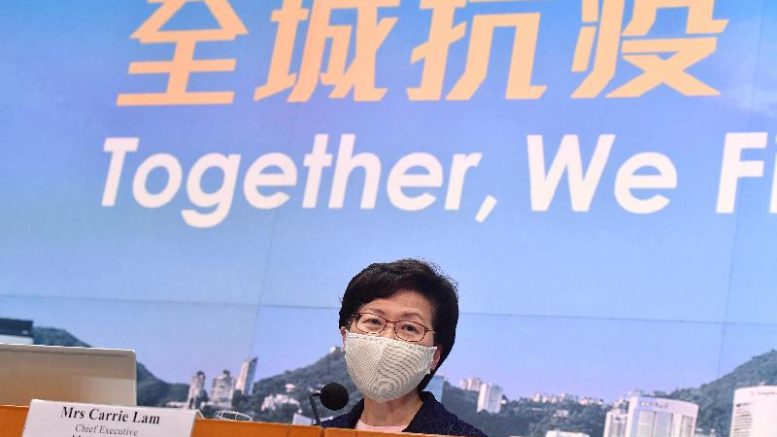 In the most blatant move to rob the democratic rights of people since direct election to the then legislature was first held in 1991, Chief Executive Carrie Lam Cheng Yuet-ngor announced on Friday the Government will invoke a draconian emergency law to postpone the Legislative Council election, scheduled for September 6, for one year.

She revealed at the press conference plans to allow Hong Kong voters who reside in the mainland to cast their votes outside the city. Also, Mrs Lam said the Government would renew its attempt to urge the electoral watchdog to find ways to shorten the waiting time for elderly voters, pregnant women and the disabled at voting stations, another other voting arrangement.

All those initiatives, in the name of fair election, could just do the opposite, inflicting serious damage, both substantial and perceived, to fair election.

This is plainly because her attempts to alter the electoral arrangements are clearly made to give favours to the pro-establishment camp, with whom she is not shy from aligned.

Coming immediately after the disqualification of 12 democrat aspirants from contesting the now-postponed election, revelation of fresh bids to change the electoral rules shows the Government and Beijing are desperately keen to make further efforts to curb the strength of the democrats in the next legislature.

Civic Party legislators among the 12 democrat aspirants being disqualified from the now-postponed Legco election.

Under the existing electoral arrangements, voters have to cast their ballots in voting stations in their respective geographical constituencies during the voting day. There are no alternative voting arrangements such as electronic or postal voting for people who are outside Hong Kong.

The Government gave no estimate of the number of voters who spent most of their time outside Hong Kong and therefore may not be able to show up at the voting stations.

Although more people whose families are here and have to travel frequently to the neighbouring Guangdong province for business or work, they can easily travel back to the city to cast their votes on voting days. But due to the guarantine requirements across the border, there are concerns that fewer people may take the trouble to come back to cast their votes.

The issue was first raised recently by Tam Yiu-chung, a leader of the pro-Beijing Democratic Alliance for the Betterment of Hong Kong and a local member of the Chinese National People’s Congress Standing Committee.

He had urged the Government to consider postponing the election. He argued it would not be fair to a big number of voters in the mainland who would find it difficult to cast their vote when the anti-epidemic measures are in place.

The pro-establishment force soon acted to intensify their calls for special voting arrangements.

When Mrs Lam revealed on Friday the Government would consider the idea, she moved a big step further, pointing to a fundamental change of the voting arrangements to allow voting from outside Hong Kong, or perhaps more accurately, in other parts of the mainland.

Making voting arrangements for Hong Kong voters in the mainland will prove to be a hugely complicated task. Worse still, it is vulnerable to manipulations and vote-planting because of the mainland factor.

Take the case of Hongkongers in Hubei province, whose capital city Wuhan is widely seen as the place where the first Covid-19 clusters erupted. The Government first said in early February there were a few hundreds of Hong Kong people stranded in the province. The figure kept inflating and turned out to be thousands.

The Government has so far not given an official figure of the number of voters who now reside in the mainland.

An equally complicated and controversial issue is whether voters who work or study outside Hong Kong and the mainland such as Canada, Australia and Taiwan could also cast their voters from overseas. It seems to be a clear case of unfair treatment vulnerable to face a challenge in court if they are not able to do so.

It looks almost certain that the pro-establishment force only cares about the voting arrangements for those who live in the mainland, particularly those in the Pearl River Delta, but not in other parts of the world.

Pro-Beijing figures have said most of those voters who live in Guangdong are their supporters. They stand to gain from the tally of votes if they can cast their ballots from there.

Moreover, letting them cast their votes in the mainland, but not for those overseas, carries a wider political implication in that the border line between Hong Kong and the mainland will virtually be lifted when it comes to voting.

It falls in line with Beijing’s broad strategy of speeding up Hong Kong’s integration with the Greater Bay Area. But it is precisely because of its political ramification that the idea looks certain to spark a fierce debate when it is put on the legislative agenda.

This article was first published on Apple Daily website on August 5, 2020.